What can I say; our boys continue to rock the So You Think You Can Dance stage. Marko had another featured (and shirtless!) moment in this week's group number with the remaining seven boys, who each represented a stage of grief. Bare-chested Marko was "anger" while Tadd was "denial." Watch the performance here and decide whether you agree that Marko's multiple features during group dances must mean that the choreographers like him ... right? Marko's pecs knock everyone out

This week we got to know the dancers' families, and Marko explained that he came from a long line of doctors and lawyers. Needless to say, it was a shock to his family when he chose to pursue dance. He nabbed the one dance job in Guam, on a cruise ship show that featured a drag queen. Marko was quick to clarify that he didn't perform in drag, but he did have to dress up once in a sort of hazing -- he's cute as a girl! His sister thought so too.

Don't worry ladies, Marko kept the shirt off for his jazz dance with Melanie. He did have some crossed suspender action that I'm not sure I'm fond of; see it here. Guest judge Travis Wall called Marko "so strong," saying that the way he moves works to "command attention" and he's "one of the strongest male dancers" this season. Oh, Travis! Love you even more than I already did. Mary named Marko the "Domination Man," and Nigel said, "I may not have been a fan a year ago [Marko made it to Vegas last year, but Nigel voted him down], but I assure you I am now." Aww! Just looking at this photo makes me exhausted.

New choreographer to the show (I believe? Correct me if I'm wrong) Shaun Evaristo put together a hip hop routine for Sasha and Alex. Hey, Shaun! Happy to see you here.

Tadd grew up in Salt Lake City with his parents and two sisters, and he wore an adorable little bow tie for a portrait when he was a wee tot. He came from "a really strong Filipino background," but was one of just a few non-Caucasians in the area. As he mentioned in an earlier episode, he had an "identity crisis" when he was young, believing that he, too, was white. Despite the "miniscule" Filipino community he grew up in, Tadd said that his background played a huge role in who he is today, "culturally, socially, mentally, spiritually, everything." Tadd's here to represent the Filipino community, and he even has the shirt to prove it!

This week he and Jordan got a smooth waltz on a very dry iced stage, ending their pairing with Jordan's kiss of death. Mary told Tadd, "You have this tenderness about you ... you don't tighten up ... you still pull that [waltz] off." Nigel told Tadd, "Your arms were fantastic" (essential for ballroom dance), and Travis said, "Whenever you're out of your genre, you seem to be having the easiest time." Not badd, Tadd (sorry, had to do it). Judge for yourself right here. On results night, Marko and Melanie were safe, but Tadd and Jordan found themselves in the bottom three. "People must have went to the kitchen while [Tadd and Jordan] were dancing," Mary mused when learning of their position. To Tadd she said, "I wasn't sure about you, but from the first week you blew me away." Before the solos, we got a performance from part of the Cedar Lake Contemporary Ballet Company, including, it appears, dancer Soojin Choi. I love that they bring in guest professionals on results night.

Tadd busted out his b-boy moves to a remix of Gloria Estefan's "1-2-3," continuing his pattern of choosing very un-b-boy-y (follow that?) music paired with interesting handstand work. Travis mentioned how much he's looking forward to working with Tadd, and he also mentioned his belief that Marko and Ricky are the two best male contemporary dancers on the show. Tadd is safe, so we'll see both of you guys next week. Tadd hand-hops his way to safety.

Sorry, Cindy Chang fans: America's Got Talent's "Asian American Susan Boyle" got cut in Vegas, despite being in the "judges' choice" group of auditioners. Piers called her rendition of "Dream the Impossible Dream" "a little bit wobbly," and Sharon described the song as "below par" before giving her the boot. Female Asian American group 4Play also got cut on the first day (here's their original performance), so I think I'm off the hook for watching this show? Right? Please? Comedian (and Hyphen Issue 12 cover model!) Ali Wong appeared on The Tonight Show last week with a fun and hilarious stand-up routine. Really digging her style, too (see it here). Hope to see more of you, Ali!

And finally, quick cameo from Glee's Harry Shum Jr. (Mike Chang) on The Glee Project. Yes, I really do watch that show. He was a guest mentor, helping the contestants with -- what else -- dancing. Good to see you, Harr! MISS YOU. "Here's a pointer: try actually lifting your feet when you dance, kid." 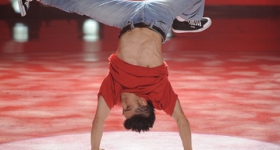 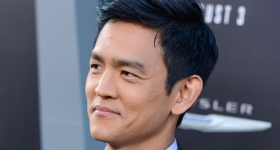