Fall TV! Is back! Well, partially, anyway. My DVR has sensed that the time to kick into high gear is near and is cowering as we speak...

I feel like I'm the only one still watching Survivor, but I don't care! It's a fascinating (if very mutated) social experiment, just as it was when it started twenty-three(!!) seasons ago. On the Savaii tribe (a.k.a. the returning and beloved Ozzy's tribe), we have Elyse Umemoto, a 27-year-old dance team manager(?) from Las Vegas. We really didn't see too much of Elyse in the premiere, but in her bio she mentions that she comes from a family of survivors, including a grandfather who grew up in a Japanese internment camp. I'm looking forward to seeing what Elyse adds to her tribe and to the show as the season continues. She can manage a dance team, but can she manage the jungle?

Over on Upolu (the "we got stuck with Coach" tribe), we have Edna Ma, an anesthesiologist who is 35. Edna also didn't get a whole lot of screen time in the episode, but after her tribe lost thanks to Coach's inability to do ... well, anything, really, she was the lone tribe member to hang around and help Coach carry the tribe's supplies back to camp. A sign of kindness? A sign of weakness? Only time and Jeff Probst will tell! Edna was one of those people who wears a suit to Survivor for some reason.

Also premiering last week was my favorite and yours, America's Next Top Model ... All Stars! Which means the return of Sheena Sakai, our pal from cycle 11. I'm so happy to have Sheena back! I have a feeling her sassiness will pale in comparison to some of the -- ahem -- psychos she's sharing this all-star cycle with, but I think that that's probably a good thing, at least for the moment. Don't go trying to one-up someone who peed in a diaper on national television, girl. For their first photo shoot, the girls had to recapture the personas they embodied during their respective seasons, and Sheena was "Harlem but Not Hoochie," which ... sure, I guess. I don't know that "hoochie" immediately comes to mind when I think of Harlem? But I'm not going to start picking apart this silly show's characterization of neighborhoods. Sheena's photo was just fine, but the judges loved her vintage, shiny jumpsuit when she came out for judging. Andre Leon Talley was especially enraptured, which I suppose is a good thing. Still, it was clear that she didn't get the big crowd reaction that some of her competitors did (disadvantage to have been on the show three years ago), and she made it to safety but was one of the bottom four. Kick it up, Sheenie! We're rooting for ya.

On Top Chef: Just Desserts, the chefs got to recreate the fanciful candy world of Willy Wonka's chocolate factory. Sally found herself nearly going home because of her somewhat bizarre choice to recreate the "dirt" in the oompa-loompas' wheelbarrows. What she ended up with was ... not terribly appetizing. Let's just say that Sally herself referred to her snack as "oompa-loompa droppings." Uh, yeah. Aside from looking less than delectable, the orange dirt, pistachio financiers, and chocolate mousse were difficult to eat, leading the judges to scoop everything up in a most unappealing way. Yeah, it's a lucky thing that two other chefs screwed up real bad, Sal. Stop helping others so much and get yourself back up to par! Don't look quite so satisfied yet, Sally.

And finally, on Project Runway the designers had to work with women and their husbands/boyfriends to design an outfit for the ladies. Olivier ran into problems right away when he learned that his temporary model had "ginormous" boobs. The menswear designer actually had to ask Tim Gunn what "double D" meant. Hoo boy. Olivier: "What are those things on your chest area?"

Things only went downhill from there. His couple wasn't into his trademark neutral colors and his client found her pants rode up as she walked. On top of the boob dilemma, Olivier was also faced with dealing with opinionated clients for the first time on the show. "I have a big ego; I want people to wear what I design," he explained, later saying, "I'm really fed up with dealing with all this s---." Somehow Olivier landed in the safe middle, even though it's apparent to me that he doesn't know what to do with a breast (that top almost looks painful), and I am incredibly sick of his washed-out colors. Will nothing lead you to an actual hue, Olivier?! Like a strightjacket just for breasts, am I right ladies?

Anya, meanwhile, continued what looks like a smooth sail right into the finale with her modernized take on a kimono-style dress. Using a black and white pattern, she created an asymmetrical dress that, as usual, had her sewing right up to the last second (and worrying Tim).

Nevertheless, she made it into the top three once again, winning the judges over with her blending of Japanese and African influences, a culture clash that Michael Kors found memorable and Heidi said she had never seen before. Nina Garcia didn't care for the long sleeve, and I have to say that I agree -- the very asymmetrical hem more than makes a loud and clear statement. Anya didn't take home a win for this one, but I'm continuing to be impressed by her designs. I still don't know what magic she's using to sew all these garments with such skill, but may that magic continue through fashion week! 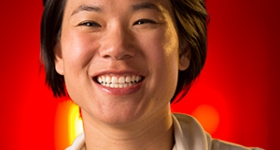