Hyphen TV: 'So You Think You Can Dance' Edition

Well guys, we're knee-deep in the ol' dog days of summer, so it's down to one show this edition. I hope you love So You Think You Can Dance as much as I do...

We had just twelve dancers last week (the time, it flies!), so each of the six couples performed twice. Tadd and Jordan started out with a Travis Wall (yessss) contemporary dance, a "dark and heavy piece" in which Tadd played a deserted wanderer and Jordan was a vulture. Did I mention that he's a shirtless wanderer? I thought Tadd did a nice job of conveying the desperation of nearly dying in a desert, but then finding the strength (and smooth, smooth movement) to ... uhh, kill his vulture stalker? Just like in real life. See what you think here. Tadd's all, "Get outta here, vulture."

Mary called the dance "magnificent" and told Tadd that he's been surprising her every week, but this week she's finally not surprised by his skills (where have YOU been, Mary?). "So strong, crazy good." Guest judge Jesse Tyler Ferguson (who was fantastic, I thought, and can we just talk for one second about how DEVASTATED I am that they're recasting baby Lily on Modern Family?!) spoke up for the boys when he commented, "What just happened there with Tadd, that proves that the guys are in this to win it." Uh, YEAH. Nigel commended Travis for incorporating Tadd's breaking skills into the contemporary routine, which I also enjoyed. Great first showing!

Melanie and Marko got a tango for their first dance, and the routine was all about passion. Shirt Watch: Marko had a shirt on, sorry ladies. It was a little unbuttoned though. I wasn't really seeing passion during the dance, though it did seem like Marko was concentrating really, really hard (either a good or a bad thing, depending on how you see it). I did love the cool between-the-legs slide at the end; watch the whole performance here. Marko gives us a good view of his side part.

Nigel called the dance "tremendous, compared to dress rehearsal." Wait, Melanie and Marko aren't perfect during dress rehearsals? You're shattering my world, Nigel. Mary went into some of the technicalities that make the tango so difficult, then said that the dance "could have been better." Sonya brought it back by telling the pair, "Every time you make me lose my breath because of the conviction coming from your souls ... You're timeless dancers." Right on, Sonya! A slightly rocky start, but M&M can pretty much do no wrong, so nothing to worry about...

For their second dance, Tadd and Jordan got a Broadway routine in which Jordan played a sleeping princess and Tadd was some sort of ... pirate prince? At least that's what his shirt (aww) ruffles and cape-y jacket would have you believe. The dance felt a little too light and cute, and the song ("Out Tonight" from Rent, which I enjoy as a song but is kind of weird for a dance performance) only exacerbated that feeling. Decide for yourself here. The judges felt the same way: Sonya was "underwhelmed." She added, "I know your abilities and craft and I didn't see them." Nigel said "It could have been quirkier, sillier ... It was okay." Again I fell in love with JTF when he agreed that it was "a bit of a grab bag" but went on to say "The vulture dance was one of my faves of the season." Kind of seems like Tadd and Jordan suffered from not-great choreography/music? It is lucky that they had Travis though, phew.

Melanie and Marko also got to dip into contemporary in their second dance, which centered around a single hanging light bulb and represented the two of them slipping in and out of the light. I'm maybe slightly biased, but I thought this one was great. Seriously, watch it right now. Jesse Tyler Ferguson said he had goosebumps that were spelling out messages in Braille (hee!). Nigel talked about how horrible it will be to split this particular couple ("There's something magical about the two of you") and said that the performance "didn't feel choreographed ... [they were] moving on [their] own." Mary also will be "devastated" then this duo breaks up (me, too) and said that the performance was flawless. It really will be interesting to see how Marko in particular does without Melanie. Though they truly are special together, there's something particularly arresting about Melanie that I think Marko greatly benefits from. May you prove me wrong and shine extra bright next week, Marko!

Results show quick hits: group performance here, our two pairs are safe, I guess I should mention that Nicole Scherzinger (okay she's winning me back with that badass full name) performed, and finally, we got the ABSOLUTELY CRUSHING news that during a non-SYTYCD audition, our beloved Alex Wong (omg, didn't know he was one of the shadows dancing behind Dia on The Voice!) was doing the same move he did on the show last year when he snapped his right tendon, and he snapped his left tendon. For the love of god, Alex, stop doing that move. I can't even tell you how disappointed I am. Heal up, Alex! We are seeing you next year, please please please?? Two observations: I am loving the person/people who are bringing Tadd signs with blinking lights to the audience. Also, has anyone else noticed how heartbroken/elated Marko looks down in the safety pit every time Cat Deeley names someone as going home/safe? I have a feeling that all of the dancers love that guy, and the feeling is mutual. I heart you too, Marko!

Categories:
Columns
Tags:
So You Think You Can Dance
Contributor: 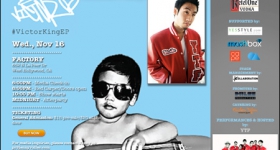 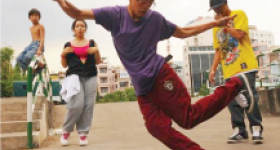