This week saw the premiere of reality show Family Restaurant: The Quons, which follows the two parents and their three adult children of the Quon family as they run their restaurant, the Lingnan, and their awesomely monikered fast food kiosk Chicken for Lunch. Eldest son Miles gives the appearance of running the show as the restaurant manager, shouting instructions in English and Cantonese (thanks RMY!) to his family and employees alike. Sister Mandy is the hostess at the front of the house, keeping up a smooth facade that gives no indication of the chaos in the kitchen. Younger brother Marty is mostly absent, going to school, working as a car salesman, and only logging in a few hours at the restaurant. "The laziest worker is definitely me," Marty candidly says about himself. A smile, or a grimace?

Father Kinman is also not on screen much, though it's because he seems shy in the spotlight, not because he isn't there as much as anyone else. "His way is wrong," Miles says about his clearly good-natured father while sitting right next to him. The true star of the show is mom Amy, the larger-than-life presence who always wears brightly colored Chinese dresses, seems to know most of the restaurant and kiosk patrons by name, and showers gifts upon her guests for Chinese New Year, Valentine's Day, and possibly the literal drop of a hat. This woman knows how to work a crowd and a camera.

The first two episodes of the show capture the absolute bedlam that is running a full-service restaurant, delivery service, and food kiosk, though most of the attention is on the first. Context is hinted at but never clearly defined: the majority of the clientele we see is Caucasian, and the show doesn't really explain that the restaurant is in Alberta, Canada (the series originally aired on Food Network Canada in 2009). Miles is engaged to a woman from Beijing named Pan Pan, but we don't know anything about their relationship except that Amy has declared their wedding date of April 4 as inauspicious. Mandy, meanwhile, is dating an east Indian man named Ajit, and Amy is concerned about their ethnic differences. "He's a good man but [he's from a] different culture," Amy worries. It's difficult not to wince when she goes on to conjecture about the "chocolate" babies the couple would have together, though it's certainly a line of thinking that plenty of children of east Asian immigrants are familiar with. The issue is not really pursued, and after Amy has a closed-door discussion with the ever-patient Ajit, things seem fine. For the moment. For the most part, Family Restaurant treats the Quons as your average family just trying to get along who happen to be of Chinese descent. It's at once refreshing to see them as not that different from any other Canadians and frustrating to watch how they gloss over complex cultural issues as they play out for the cameras. Give the show a chance -- if nothing else, to see how delighted Kinman gets when a new aquarium is installed in the restaurant. Spoiler alert: it's adorable.

This week on Project Runway, the designers had to create outfits for prickly judge Nina Garcia. After listing a litany of things she doesn't like, including patterns and cowl necks, Nina calls Anya's choice of yellow "a risk for sure." Seriously? When Nina saw Anya's fabric in the workroom she asked, "Is there a Plan B?" Jeeeez. Freaked, Anya scrambled to dye her yellow fabric (again stressing that she does not know the proper way to dye this particular textile), and with some help from buddy contestant Laura, put together a nicely tailored, very slim-fitting jumpsuit that landed in the top three. Nina was amazed at Anya's fabric transformation, and Heidi commented that "the bum looks good" and "I'm shocked that you learned how to sew four months ago" (I have a feeling that that's not the last time we'll hear that incredulous statement, including from me). Anya landed in the top three, though she did not win, and competitor Viktor was upset that she was regarded so well despite getting help from Laura. Let me make clear how I differ from Viktor: we've seen Runway contestants help one another many times, but at the end, everyone is responsible for his or own design, patterns, fabric choices, and construction. There simply isn't time for anyone to help someone else with much more than the finishing on a garment; therefore I find Viktor's concern ridiculous. That said, I still do not understand why Anya/the show puts so much stress on her unfamiliarity with aspects of garment construction. Just look at Julie, the woman who went home this week: she just graduated from fashion school, yet she struggled and fretted that she didn't have as much experience with sewing as the other designers. And that's after finishing school! I do hope that we get an explanation from/about Anya soon because something just isn't adding up here for me. This turned into the jumpsuit above!!

Olivier, meanwhile, was barely on screen this week, which meant that he landed in the safe middle. I'm already starting to grow tired of his muted neutral tones and menswear-inspired style (can we get a little more love for the poor model's boobs, please?), so I hope Olivier changes things up soon. And finally, the lovable George Takei stopped by Conan to answer a (coincidentally also Asian [American?]) fan's correction regarding Conan's Vulcan salute. Thanks for telling us the truth, George! I've never seen a minute of Star Trek, but I love this man 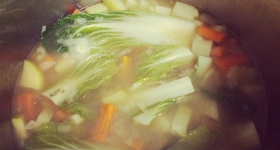 Where Do Asian Americans Fit in Fitness? 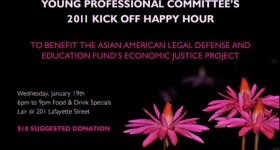 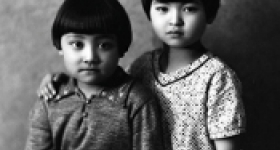 Thanks for the tip! I wasn't sure and tried to make a guess with my untrained ears...