That's the question that kept popping up in my head as I looked at the GQ photoshoot featuring Ken Jeong and the fall season's hottest corduroy pants. The actual task of showcasing those pants, mind you, falls not to Jeong but the male model with the washboard abs, canoodling with a 19-year-old female model. Jeong's role is to "photobomb" each shot with nothing more than his own brashness; clothing optional.

The GQ photoshoot is the type of physical comedy audiences have come to expect from Jeong, who gained fame as the flamboyant gangster Mr. Chow from the Hangover series. In the first Hangover, a nude Chow introduced himself by leaping out of a car trunk and beating the movie's three protagonists with a tire iron.

Chow is the everlasting image associated with Jeong. In a promotional effort for a different movie, The Goods: Live Hard, Sell Hard, Jeong made a cameo appearance with Jeremy Piven on WWE, the long-standing wrestling entertainment drama. But Jeong was catering to the crowd with his Mr. Chow guise, sporting a leopard coat and a bare midriff.

Since the first Hangover was released in 2009, Jeong's star has never been brighter -- he's in the Hangover sequel, he's on NBC's Community, he has shoe commercials with basketball stars. This May, he hosted the Billboard Music Awards (How was his performance? Take a look at the terribly-worded poll that Entertainment Weekly posted).

Jeong's impact on the Asian American community is a sensitive topic that Hyphen reviewed after the first Hangover movie. People have to remember that first off, Jeong is an entertainer and a businessman. The nudity and lisps are part of the over-the-top brand Jeong has built. His style is risky, it's loaded with social, racial and sexual non sequiturs, but it gets lots of laughs -- and lots of money.

As an Asian American male, my problem is with mass media outlets like GQ that push Jeong the Brand and not Jeong the Person. The GQ photoshoot is particularly aggravating for two reasons:

1) Jeong would be a perfect fit for GQ in a traditional profile. He has style sense. He has a story to tell -- Jeong is a certified doctor who decided, with his family's support, to launch into comedy. While filming the first Hangover, Jeong nearly lost his wife to cancer. But GQ readers instead got Mr. Chow sprawled throughout this photoshoot. One of the GQ captions perfectly captures this theme: "Ken Jeong is a real-life physician, but you know him as the coked-out guy in The Hangover Part II."

2) It's almost as if in each photo, GQ is setting up a spectrum of sexuality and attractiveness -- at one extreme side are these models, hypersexual, physical paragons; on the other side is Jeong, a paunchy joker who represents the social awkwardness and sexual undesirability attributed to Asian American males in society. Despite his status as a TV and movie star, Jeong is still not worthy of wearing the pants in the shoot. He is not even interesting enough to warrant a solo photo spread.

The counterargument is that Jeong's role in the photoshoot is to lampoon the obvious sexuality we have come to expect from these types of magazine spreads. But the images do not quite pull off that satirical tone -- I would say this even if, say, Jim Carrey from his Ace Ventura days were the photobomber.

I can't blame Jeong for making the choices he has made -- he's an incredibly successful actor who has "made it" in an incredibly difficult industry. But I do question how the entertainment industry can warp our image of a person and can push that image as something broader than what it is -- a fictional role not to be taken outside the context of the broader performance.

Kevin Lee is a journalist who has covered Chicago politics, Wisconsin protests and Texas transparency issues. He recently returned to the Bay Area after waltzing around the country in pursuit of stories. He is resisting the urge to buy a car to get around. 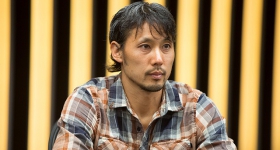 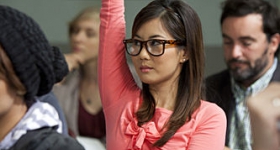 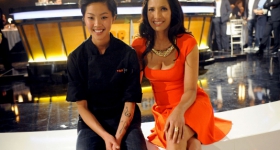 That's a racist sentiment, smug guy, but more importantly, it's false.  Take a look around -- a real look -- and you'll see that the average person of every race is ... average-looking.  And that average is comparable to the other racial averages.  But when you think "what do white people look/act like?" your pre-programmed mind conjures an image of a plethora of Ryan Goslings or Brad Pitts, ready to head.  When you think "what do Asian men look/act like?" -- your mind conjures Ken Jeong.  This is the point.