Fred
Brounian, the hero of Alex Shakar’s Luminarium,
is in a bad way. His twin brother George is in a coma, the final step of
cancer’s course through his body. He’s sold the computer game company they
created together, so that he can throw every penny he has at reviving and perhaps
curing George. This is to say that Fred is in a state of crisis -- an identity
crisis not in terms of ethnic confusion, but in a more fundamental sense of
lacking a firm grasp of oneself and one’s place in relation to others.

The
novel’s epigraph, a line from the Upanishads -- “Lead me from the unreal to the
real” -- reads as a kind of prayer or wish for salvation via the tangible and
definite, and would seem to indicate that Luminarium,
in all its girth, is meditating on the dyad of reality and the virtual, and on
the postmodern dilemma of not being able to distinguish between the two.
Indeed, the novel’s plot tracks Fred in two tech-saturated situations: the inexplicable
emails and texts he’s been receiving from his comatose brother, and his
participation in an NYU study that promises spiritual awakening induced by a
brainwave-altering computer program.

Far-fetched,
yes. But the absurdity of the dual plot paths also allows Luminarium to constellate seemingly trite topics -- technology,
class, identity, our post-9/11 world -- in weird, nearly transcendent ways. The
book’s characters know and experience the real world and real relationships
through the lens of virtual realities. In his first round of the NYU study, Fred
enters a state that might be described as radical identity, in which he shares
the perspective and desires of strangers around him, to the point that he shoplifts
tweezers because a woman nearby does it too. And in one of the novel’s most
moving passages, Fred’s avatar pursues an angel wing-clad George, flying right
off a virtual ledge during a test run of his company’s virtual simulation of a
9/11-like attack on the Empire State Building. As he falls, Fred sees himself
on-screen, “fully automated, arms and legs flailing uncontrollably.” It’s an
out-of-body moment in which the game very literally gives Fred a new way of
seeing himself.

Whether the cause is technology or
tragedy, the reader begins to sense that the blurring of real and virtual is a
moot point, because everything is, in a way, tangible. The virtual Empire State
Building is very real, not only because Fred’s coworkers designed it that way,
but also because the avatars are extensions of Fred’s bosses. Fred needs to
play his part in the game for the sake of the game, but also for the sake of
keeping his business venture alive. The
real/unreal issue is not nearly as interesting as how the novel presents the
series of losses in Fred’s life. His twin brother and other self is gone, as
well as Fred’s fiancée and their fancy Manhattan condo, his job, and the
company. In this landscape of loss, Eastern spirituality is just as often
invoked to do the same dirty, rationalizing work that we expect of science.
Holly, Fred’s Reiki-practicing mother, earnestly conducts energy cleanses in
hopes of waking George, while Fred tries his uncle’s advice to “become the mu.”
In Luminarium, both science (in the
guise of technology) and religion try to account for what can’t be explained,
thereby offering their own unique forms of hope, or perhaps escape.

The
failures upon failures of technology, religion, and family in the face of loss
can make Luminarium a challenging, testing read. Shakar
crafts Fred in a sympathetic light, with increasing emphasis on pathetic as Fred
continually acts outside his best interests. And although the narration is for
the most part a straightforward telling of events, the final chapters become
unmoored as Fred hurtles toward an increasing sense of hopelessness. As Fred
unravels, locking himself in a room trying to self-induce shifts in his
brainwaves, the novel offers only opaque fragments of the experience, almost in
poetic form. The final chapters are an almost unnerving read, but also
necessary in conveying Fred’s internal numbness.

September
11 hangs implicit over Shakar’s publishing record: his acclaimed first novel, The Savage Girl, had the misfortune of
debuting on the day of the attacks. The same hovering quality can describe
9/11’s role in Luminarium: the events
condition -- permeate, even -- the fabric of the novel, its chapters marked by a
calendar set to August 2006 and leading to the five-year memorial. While Fred
is frying his brain into perfect emptiness, the novel splices in motley scenes
from the memorial’s “celebrations” that underscore the ridiculousness of both
situations. Luminarium very movingly renders
a painful anguish entailed in mourning, a process that the novel suggests is
like something the brainwave “God machine” induces: a grasping and pulling in
and out of ourselves in desperate and often absurd attempts to connect with
fellow mourners.

Marites L. Mendoza is a PhD student in the English Department at the
University of Washington. She lives, reads, and writes in Seattle. 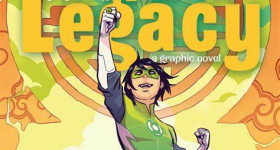 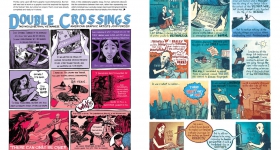 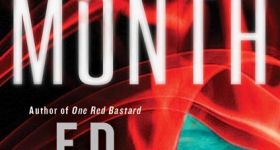