A distasteful YouTube video denouncing GOP presidential candidate Jon
Huntsman for his connections with China and his relationship with his
two adopted daughters has made waves among Republican Party campaigns,
conservative commentators and media channels.

The rather amateurish montage, which can be seen here, includes video clips of Huntsman speaking in Mandarin Chinese, a photo of Huntsman with one of his daughters, and a clearly doctored image of Huntsman merged with Mao Zedong.

The video questions Huntsman's patriotism with captions such as "American Values or Chinese?" and "China Jon's Daughters Even Adopted?" The video ends with the caption "American Values and Liberty Vote Ron Paul".

The montage has been viewed more than 250,000 times since being posted by a mysterious user named "NHLiberty4Paul" on Jan. 4, 2012. The user has had no other activity since posting the video.

The GOP presidential candidates are currently in New Hampshire,
gearing for the nation's first primary election for the 2012 campaign,
which takes place Jan. 10.

The Huntsman and Paul campaigns have each criticized the video.

"The thing I object to is bringing forward
pictures and videos of my adopted daughters and suggesting that there
is some sinister motive there," Huntsman said according to the Huffington Post. "I have a daughter from China who was
abandoned at two months of age and left in a vegetable market, picked up
by the police and sent to an orphanage."

"I have a second daughter who was born in India in a very rural
village ... and left for dead the day she was born," he added. "And
luckily she was picked up before the animals got her, and she was sent
to an orphanage for her safety, was raised and now she is in my family.
So I have two little girls who are a daily reminder that there are a lot
of kids in this world who don't have the breaks that you do and face a
very uncertain future ... and now these two girls are on the
presidential campaign trail. I say, how cool is that?"

One of Huntsman's daughters, Abby Huntsman Livingston, called the rhetoric associated with the video "vile" on Fox News.

"I think it's unfortunate that the political conversation has become
this vile," Huntsman Livington said. "I think this video goes a bit far. My two little
sisters are the love of my dad's life. They came from very unfortunate
circumstances, and we feel blessed every day to have them in our lives.
So, they're the ones I think about in a video like this."

A Ron Paul campaign spokesman said "Whoever did it should take it down immediately," according to the US News Magazine website.

The video has gotten some play on online aggregators as well as sites known for their conservative politics. YouTube lists the video's most popular referrals sites:

The Atlantic Monthly's James Fallows rightfully wonders if the spot is the worst ad of the 2012 campaign.

The best ad of the 2012 campaign? Obviously this bizarre Herman Cain viral video for its unintended (or intended?) hilarity, though probably not so much for its efficacy. 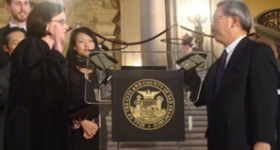 Ed Lee for Mayor -- Even If He Won't Run