After reading Jenny An's brave article on why she wouldn't ever date an Asian man and Clarissa Wei's equally heroic counterpoint, I too have come to a deep, sobering conclusion on my dating life.

I'm an Asian male and I refuse to date myself.

There it is. The reasons are complex -- part philosophy debate, part self-loathing, part Star Trek episode. So I'll just come out and say it: I'm racist.

Well, not really. Sorta. Kinda. I mean I'm not so much racist as I am NOT an asexual reproducer. Nor do I prefer to engage in auto-sexual encounters with a version of myself from a separate but intersecting time loop. So I guess, from that point of view, as insofar as I am not interested in paradox-forming self-rendezvouses, I AM racist.

I wish it weren't so, but there it is.

Don't get me wrong. I think I'm awesome. I'm pretty tall for an Asian guy. For a Vietnamese guy I'm like Paul fucking Bunyan. I love Karaoke. I'm a decent wage earner, considering that I'm neither a doctor, lawyer, banker, nor YouTube sensation. I used to drive a Toyota.

But there's problems that make me a non-option for self-dating. Like the whole patriarchy thing. And my middle class striving. And my small hands. And my being from a country with a long history of colonization and rape from foreign powers that colors nearly every aspect of my socialization.

Also, dating myself would lead to a fissure in time, a scratch on the surface of the universe that would destroy all that is and ever will be.

If a future version of me were to approach me, say at a bar, things might start off just fine. We'd chat about our mutual likes. Discuss our past and if we've ever dated other other versions of ourselves. But inevitably I'd just be turned off by his passive attitude, lack of assertiveness, and the fact that I might inadvertently cause a time loop from which escape is all but impossible, dooming me and endless iterations of myself to a quantum cycle of repetition. Sigh. Love is complicated, no?

Partly, it's because I CAN date people other than myself. I, like many others who are "racist" against myself, grew up and live in racially diverse areas. We attended liberal schools, with student bodies composed of individuals other than me, and allow for me to meet those who are not me. We have well-paying jobs, which just introduces us to even more people who are not me.

Suddenly, getting with myself just doesn't seem all that appealing. Let's be honest, who would you rather be with: a strong white guy figure whose hegemony dominates Western culture and, by extension, the world; or an effeminate, nerdy Asian guy version of yourself from the future whose very presence in the same room with you could potentially turn the Earth into a barren brown dwarf from the sheer forces of paradoxical gravity? It seems pretty obvious when I say it that way, right?

I realize that my reasoning is fucked up. Yes, I realize that I'm an Asian male. And that by making this choice I am actively giving myself and others like me the "thumbs down" from a dating and asexual reproduction standpoint. But as much as I'd love to, dating myself is just not a quantum state I could ever find myself accepting. Really, all I want to have is acceptance into mainstream culture. White culture.

And to not destroy all reality by presenting an unresolvable time paradox.

Is that too much to ask? 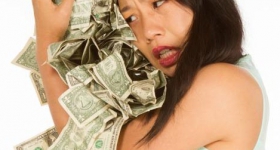 María Eugenia wrote on Fri, 10/05/2012 - 11:09am
tremendous impact the writings of this young man; Rolling Stone: pay heed!
Derek Lee wrote on Fri, 10/05/2012 - 12:49pm
Interesting article, reminds me of a Sci-Fi story I read a couple of decades ago, called..."The man who folded himself." About a dude who time travels and ends up having relations with himself, has a poker game comprised of different versions of himself. The end of the story, he finds a female version and has a kid with himself!!!
CKo wrote on Fri, 10/05/2012 - 1:45pm
This is quite brilliant. I hadn't seen the other articles (not sure I want to, though you've made me curious) but I can tell this is a, well, again, brilliant parody. Thanks for bringing the insights and humor.
Maria wrote on Fri, 10/05/2012 - 2:38pm
Ok, so clearly Im not asian by my name but this really really really pissed me off. Thanks for sharing and all but I have to reply now. What the heck is "white culture" ...they have none. The only thing they have ever done during their existence was stealing, slaughtering, and killing from other ethnic communities to gain power. What is to admire by that? Took over India and changed the way Indians name their children/family, added their language to India's, took over South Africa and forced their own military, raped the Native Americans (first nations) and basically killed off more than 80% of their population due to disease and more slaughtering and gave the living a PIECE of what was originally their land and took the rest...now they're in "reservations" bahhhh and the land theyre living in you can barely cultivate, took Africans from Africa and forced them into slaves and did free labour for hundreds of years, had beaten and slaughtered them for centuries and kicked them to the curb after the emancipation proclamation, invasion of Puerto Rico in the late 1800's, Mexico...in some areas our neighborhoods are being taken away because some of the rice farms are being taken over by the white man as if they dont have enough already. They are greedy. Thats not culture, its seemingly domination by force and theft. Which is sickening. Atleast the asian culture has beauty... Dont get me wrong, I love my whites/hispanics/blacks/asians but people that are white washed lights a spark in my soul and it seriously irritates me. They dont know what its like to have "culture"...the food, the music, clothing for ethnic festivals, folk tales...come on now, seriously?
Anonymous wrote on Sat, 10/06/2012 - 3:44pm
Well, I keep waiting for an Asian male to write about why he refuses to date Asian females (believe me, I know people like this), but that would probably be going too far.
skru-u wrote on Thu, 10/11/2012 - 1:05am
He who does not know how to look back at where he came from will never get to his destination. No matter how America liberalized and educated you, you're always a chink to them. You can never get ahead by ditching your tribe. It's ok to be coconut because you live in a country of white people. But coconuts cannot fool people they came from an apple tree. Coconuts are always brown outside, no matter what country you ship them to. They don't turn white when they get to America. Unless you're rich like Michael Jackson, you can bleach yourself, but you will have to do major repairs on your flat ugly face. Also, even if you want to date Asian women or men, tough luck to you because you're fU(&!n ugly.
Mic Nguyen wrote on Tue, 10/23/2012 - 2:22pm

Also, thanks for the Michael Jackson comparison!

Kathy wrote on Tue, 10/23/2012 - 8:37pm
Appearantly you do don't have an open mind. I am surrounded by Cacasion people and clearly I wouldn't be any happier. Why? Well because when ever there is an Asian in town everyone flocks to them. The answers on that is obvious. We have good intentions and morals. I am sorry I forgot to mention. I only read a few sentences in your article and didn't feel the need to read more. I can say Asians age really well do yes I would want to be stuck with an Asian when I turn 50. I clearly have nothing against cacasion's as I think Asians can relate to them as in proper morals. But this only goes for the cacasion's who are no longer in college. I live in a five town collegel area and these students have different partners like how they. hange their cloths. Of purse as they graduate life gets serious but that is still no excuse as to why they sleep around so much during college years. I'd rather be date a safe clueless nerd the. someone who looks the part but has possibly destroy their health to disease. Just my thoughts. ur I don't not dictiminate. If I came across a cacasion, african american, or hispanic with good morals I think of them as my Asian with good morals. I went to visit a small private middle school and I will admit that majority 50% of the students were Asian and 47% Cacasion. I did not see other races but I am sure it was 3%. Asians are know. as nerds. ur who would 't want to start with a nerd who eventually becomes a hottie after accomplishing their long term goals?
Mic Nguyen wrote on Wed, 10/24/2012 - 6:43am

xenu01 wrote on Fri, 10/26/2012 - 1:24pm
I mean, you seem pretty awesome to me. Wouldn't the destruction of the universe be worth the few minutes of brilliant, tongue-in cheek discussion you might have? I am also curious as to how far you can go with yourself before paradox kicks in. I mean, maybe second base is ok? Maybe if you stop just short of actual asexual reproduction? Worth looking into.
refresh_daemon wrote on Fri, 10/26/2012 - 3:04pm
If they did, perhaps it was just an alternate reality version of themselves where they actually display some resemblance of human cognition rather than simply projecting their own issues into the comments section. But if such a person exists in linearity with the persons that comment in this reality, why can't we have them instead? Or would the merging of these separate timelines result in space-time collapse? Amusing piece, Mic. You put flowers on the grave of this silly controversy.