Sheldon wasn't really in this week's episode, but I liked this photo.

A winner has been crowned on RuPaul's All Stars Drag Race! Spoiler alert: it wasn't Jujubee. She got plenty of opportunities to shine during the three-part finale, though. First, Juju and the other queens took turns rehearsing stand-up routines with guest judge Cheri Oteri. When Jujubee started out on a not so strong note ("My parents immigrated from Laos to America in 1976. They swam here! I'm just kidding"), Cheri stopped the act and dropped some wisdom: "If you're gonna make a joke, commit to it." Jujubee took her words to heart and came back strong with some riffing on his given name, Airline. "Baby, I think that was the only word they saw when they came to America...My grandmother could never get it right." God help me, I love Asian grandma comedy. It was a hopeful start for Juju.

After rehearsals, the queens were whisked off in dragmobiles (one driven by season one's Ongina, hayyy) for the first event in the competition, a celebrity interview. Unfortunately, all four finalists were interviewed at once, and Jujubee could hardly get a word in edgewise while Shannel dominated. Juju knew she made a misstep in staying so quiet, saying after the interview, "I gotta step up my game -- no more Mr. Nice Bitch." At Hamburger Mary's, Juju redeemed herself on the second leg of the challenge, a press release for a signature burger. Back in the limelight and with all eyes on her, Jujubee shone the way we knew she would, selling the heck outta her burger with smiles and fearless gorging.

Finally, the ladies arrived at the Comedy Store to perform their stand-up acts. Jujubee opened with some drag commentary ("I was born a drag queen and the afterbirth was glitter"), but she really won the audience over when she performed as her aforementioned grandmother, old Asian lady glasses, saggy boobs and all. Check out her full performance right here. At judging, Cheri told Juju, "I could have heard you talk about your family and nothing else." In deliberation, Michelle mentioned how she loves Jujubee's personality, but Santino and RuPaul agreed that she has a reserved quality that prevents people from knowing the real Jujubee, and that holds her back. Jujubee and Shannel were the first ones eliminated, but it wasn't the end: on Untucked, the girls got one-on-one time with RuPaul, and Jujubee laid herself bare. "I am a people pleaser. I feel like I was born to make people happy...I feel stuck while everyone else moves forward." Ru reminded Juju that it's not her job to fix everybody, and she took those words to heart. Jujubee is now hopefully living more for herself...but still keeping a sense of humor about it: "No homeless man taking my change now!" Girl, we love you! Takes work to look this good.

Kristen got a lot of on-air time on this week's Top Chef, which we all know is an editing choice that should make her fans nervous. We saw her get a foot rub from Stefan, then say, "Flirting's fun." We got a slightly longer amount of time with her during the quickfire challenge than the other chefs and heard her explain that she "just went for the first piece that she saw" when it came to choosing a cut of beef. In the elimination challnge when the chefs had to recreate the Canlis restaurant's menu from the 1950s, we heard Kristen's unhappiness with her assignment of two side dishes, mushrooms and onions. Kind of seems like she was set up to head out, right? Well the editors actually managed to surprise me when Kristen landed in the top four, then actually won the challenge (and $10K!) for her well-cooked mushrooms and "crispy and light" onion rings. Visibly shocked, Kristen responded to the compliments with "Deep fried, can't go wrong." Padma countered with, "I've seen it go wrong. Here on the show!" Pretty big surprise for everyone, and Kristen picked up on a good lesson: "As long as I do it well, I don't have to overthink what I do." Nicely done, Kris! I wouldn't mind some of those onion rings myself... On the other end of the spectrum was chef Chrissy, who took on the Canlis salad -- the restaurant's signature dish and the only one on the 50s menu that is still served today. The judges thought that her take on the salad fell flat, though Tom commented, "In her defense, I think she had the hardest plate out there." There wasn't enough of the salad's lemon or mint, and there was too much dressing, making the whole thing soggy. Unfortunately, Chrissy was one of two chefs sent home. They did bring back Last Chance Kitchen, and I'm happy to say that Kuniko is currently in the lead. Sorry, Chrissy! Wish we could have seen more of your stuff.

We didn't get much time with Ivy this week on Project Runway All Stars besides when she was helping Cassanova (to the chagrin of some of the other designers). For her androgynous paired outfits, Ivy made matching men's and women's hot pants (or, like, bikini bottoms?) that shocked Joanna in the workroom. Ivy assured Joanna that the guy wouldn't be on the runway wearing only short shorts, but the "pants" part of the outfit was made of a sheer, gauzy material, so...isn't that basically just wearing short shorts? Ivy was safe in the middle of the pack this week, perhaps partially because guest judge/fashion superstar Jason Wu saw something there that I did not. It's still basically hot pants, no? 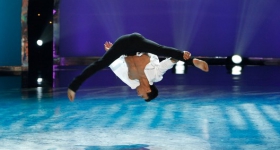