This modified piece was originally published at the Alhambra Source.

It wasn't always this way. As a young boy in Monterey Park,
I learned to use Mandarin at home and English at school. If I spoke English to
my parents or grandparents I was scolded. Scolded! But it worked. Mandarin
became the language of my home life; along with almost all the other kids I
knew, I would go home and speak Mandarin where they spoke Tagalog or Cantonese
or Fukienese or Spanish.

But when I was 10 or 12, my Mandarin vocabulary sort of
plateaued. I stopped watching Chinese dramas with my grandmother and started to
play basketball and video games instead. I lost touch with the language as I
clicked buttons on controllers and made beeping sounds on the television
screen.

That's when I discovered Chinglish, a mix of Mandarin and
English that most of my Chinese American peers share and speak at home with
their parents. Each party learned to understand what the other wanted, but not how and why we wanted what we did. Speech became utilitarian and only
later would I realize what was lost. My senior year I rejoiced when I was accepted to the
Maryland Institute College of Art. But going to art school can be highly frowned
upon in the Chinese community. My parents, their friends, and older relatives
all would tell me “you should consider how you are going to make a living and
how you expect to support your parents by being an artist.” I tell them, “it's
okay”; they say, “but still.” Chinese parents want their children in popular
big schools like UCLA and USC and Yale and Harvard. If you mention anything
other than the best, they will scoff or shake their heads and mumble something
along the lines of “I’ve never heard of that school...”

I had never lived in a city with buildings like Baltimore; I
never experienced autumn or winter the way you saw it in movies with snow and
cold weather. All that was foreign to me since I grew up in a place where
winter meant 60 degrees Fahrenheit (or 80 right now). Baltimore reminded me of
fairy tale books with all the brickwork and stone churches (okay, along with
the not-so-fairy tale muggings and murders). But the biggest change was the fact
that this place was not overflowing with Asians.

I didn’t feel welcome. I felt invisible and I was certainly
shorter than the average white person. For the first time in my life, I felt
Asian. When I entered an apartment in which a party was being held, somebody
from the corner yelled out that I had brought the sake. Another time I was
walking down the street and a bus full of young black children threw crayons
and yelled “Go back to China, Jackie Chan!”

When I returned home for the first time in college during
winter break I cried into my bowl of rice and tofu because I had missed it so
much. I felt like I had left America for three months, and then I realized that
maybe I had never really been in America in the first place. The people I met
in Baltimore seemed to live something more like what the movies depicted.
People’s mothers actually sent them cookies in the mail! We never bake at my
home. The oven is only good for storing pots and pans. This was around the same time that I realized that I
actually had, for once, important life-changing things to tell my family. I
wanted to share my progress as a man and as a student and I wanted them to know
how I’d felt while I was away. But when I turned to speak to them, only a few
words dribbled out of my mouth. I could grasp what I wanted to communicate to
my parents, but lacked the words in Mandarin to do so. I can't tell them about
the grey sky which I love for its color, or lack thereof, because I cannot
explain how I felt just like a cloud -- without sounding like a child in
elementary school.

Jee-Shaun Wang enjoys hot drinks and books with pictures. He is inspired by the cold and also by cave paintings. You can find him when you need someone to draw. If you like looking at things, look here! 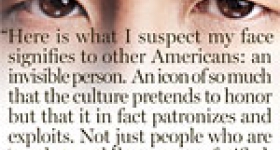 L wrote on Thu, 04/05/2012 - 1:58pm
Great article - sad to read but know that you are not alone in feeling this way.
Anon wrote on Wed, 04/18/2012 - 8:20pm
Striking similarities to my own life story with a couple of differences: grew up in El Monte, attend college in OH ... about to graduate in a month. My Mandarin is atrocious... but I hope to fix that in the future---- I have to! I feel like your story was an omen, thanks for sharing!
Stella wrote on Wed, 05/02/2012 - 11:33am
This is exactly how I feel every time I visit home, which is is why in recent years I've made a conscious effort to look up certain words. I still make plenty of mistakes, which always gets laughs. I still don't know how to communicate certain thoughts, and I don't think I'll ever get to the point where I'm fluent enough to be able talk about anything deeper than gossip or current events with my parents. I tell myself that I know how my parents are—they probably wouldn't be interested in philosophical or political debates. But who knows? People can surprise you. My parents are in their 50s; I'm in my 20s. How has living in the U.S. changed them? I know about the struggles and sacrifices they made as immigrants. I want to know about their internal struggles, as well. This is the point in my life when I should be reconnecting with my family as an adult. But my failure to use and improve on my grasp of Mandarin has placed a language barrier on top of the cultural and generational gaps already in place. I think almost entirely in English, and my internal translation is kind of slow. On good days, when the language center in my brain is on hyperdrive, I feel like a foreigner for whom a new language is starting to click. On bad days, I feel like I just got off the short bus, and everyone is staring at my helmet.