Jennifer Lopez week on America's Best Dance Crew means that we got a LOT of J.Lo time. The 8 Flavahs cuties were voted to safety, which must have been a particular relief for crew member Angel, who missed out on performing because she was home with her family after the passing of her mother. The girls had to bring on the salsa for "Let's Get Loud" with the additional challenge of incorporating trumpets into their routine. D-Trix said that the group gets better every week with this being their best performance yet. He also called 8 Flavahz "a choreographer's dream" because of their training and abilities. The girls are adorable, but they're also fieeeerrrce.

Also safe is ever-popular Mos Wanted Crew, who were to dance on the floor to "On the Floor" and teach the audience a move. Is it me or is that additional twist not really all that difficult? D-Trix complimented the guys after chewing them out a bit last week: "You guys took that challenge and you killed it." JC saw the creativity in their routine, but he also called out Jun and Ricky, who he said he could see thinking and watching the other guys during the dance. May I just say right here that I am so often impressed by the judges on this show -- not only are they all well-versed in many types of dance, they also somehow manage to watch every member of these huge crews and take note of so many tricks (and slip-ups) happening at once. I know they see the performances more than once, but still. You've really proven yourself, Chasez. Fanny Pak landed in the bottom once again, making me wonder why they're not connecting with the audience the way they seemed to back in season 2 (well, until they got voted off). They got "Waiting for Tonight," and they were tasked with both changing clothes during their routine and recreating the lift that J.Lo does in the video. Starting in silver space-y suits and welder-type masks, the crew tore off their layers to reveal their signature bright colors underneath. Lil' Mama said they tell a story so well and are so innovative; she also mentioned a moment that I liked, which is when two crew members ripped Preston's suit off as he stood with what seemed like a primal scream of victory. Good stuff. Fanny Pak was safe in the end, but I'm concerned that they need to shake things up to remain safe in the coming weeks. Over on American Idol, Jessica performed Etta James's "Steal Away." Afterward, Jennifer asked how old Jess was when she started with the growling -- turns out she was 7 when she started imitating what she heard and making it her own. Jennifer went on to say that when she thinks of other female singers who would be Jessica's contemporaries, Jessica is "just one of the best." Randy was also complimentary, saying that he liked the bluesy, soulful vibe of the song. For her second tune, Jessica broke out the big guns that you knew were coming: "And I Am Telling You," a song we saw her sing in the home video of her performing as a little growling tot. Jimmy was very hopeful about the performance, for which Jessica wore a single distracting sleeve and stood rooted to the ground without moving her feet an inch. The performance was affecting, however, and Jess earned a triple ovation from the judges (though they weren't as enthusiastic as they were for Joshua's performance just prior). Jennifer noticed Jessica's tears and said, "You let out so much ... to contain that was probably just ripping your soul apart." Randy added, "This is one of the hardest songs in the world to sing ... you are phenomenal." Tell me that that sleeve isn't distracting ... right?!

It seems the audience agreed, as Jessica was voted into safety. Jimmy did have some questions: Was impersonating a jazz singer a good idea? Is the growl a trick that gets old? I don't know, Jimmy. YOU'RE the one coaching her beforehand. He did praise Jessica's power and dynamic and mentioned that producer Tommy Mottola emailed Jimmy about Jessica and said, "I'm going to her first concert." Will you be there too?

Survivor had its season finale, and I am loath to talk about Christina. I can't deny that the poor woman was bullied and insulted throughout her time on the island (though in the end she allied with one of her two tormentors, Alicia), but it's pretty much undeniable that she was a complete non-entity by the end. I kept giving her the benefit of the doubt, assuming that we just weren't getting her side of the story, and she had her own thoughts and plans that we just weren't hearing about. Fast forward to the final four, where Christina asked the leader of the pack (Kim, who went on to win) who they were voting off. "You," Kim said. And with that, Christina accepted her fate and went on to have a quiet afternoon with the other women.

What?! How can you not even try to try to save yourself? Jeff asked her this at tribal council, and she long-windedly explained that there was no point in trying because the other three were in such a tight alliance. She did indeed get voted off in what must have bee one of the least difficult ousts in Survivor history. Things only got worse in the reunion, when Jeff asked Christina how she felt about all the bullying that went on during the season. Christina, who I must point out was looking pretty great at the reunion show, said that she understood that it was all just the game, and she didn't have any hard feelings against anyone. Girl, they were doing the slant eye. They were telling you to kill yourself. Alicia compared you to her special ed students (which led to a melodramatic, tearful non-apology at the reunion that I don't believe for a second). All Christina had for explanation was that she felt she was coming on too strong in the beginning, so she held back. For ... forever. I'm relieved that the season is over so that I no longer have to watch what became an excruciating display of passivity. Sorry, Christina. I'm sure you're swell in the regular world, but I can't for the life of me figure out why you chose to be on Survivor. Okay, I feel bad adding to the bullying, especially seeing this. But C'MON.

There is yet another new cooking reality show on Bravo, Around the World in 80 Plates. It has an astoundingly complicated premise: a group of American chefs travel all around the world, running from location to location in two teams to cram local foods down their gullets as quickly as possible, then taking over eateries to serve up their own versions of those local dishes. There are judges, but the chefs on the losing team vote to determine who will be eliminated. Did you catch all that? It's like a combination of The Amazing Race, Man vs. Food, Survivor, and Top Chef. Frankly, I'm not sure if I'll stick with it (I'm pre-emptively cringing about what happens when they leave the relative familiarity of London for less comfortable locales), but I will note two chefs to keep an eye on: Sai Pituk, chef/owner of Tara Thai in El Paso and a United States Army veteran, and Nicole Lou, chef at Bushi-Tei in San Francisco. These ladies made it through the London pub challenge on their respective teams, but will they make it all the way? I may or may not be around to find out. We'll see how it goes.

Nicole possibly wishes she had held out for another competition reality cooking show. 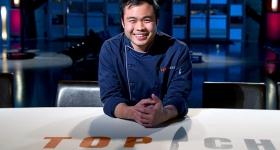 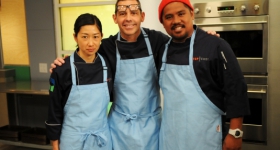