Booker Prize-winning author Aravind Adiga’s second book Last Man in Tower skillfully builds to
the final conflict right underneath your feet brick by brick, until you’re
forced to retreat to the roof teetering on the precipice before he forces you
off to meet your maker. I immersed myself in the dizzying array of Adiga’s cast
of characters who were unconstrained in their displays of love, greed, and
desires for upward social mobility

The setting for the novel is in and around Vishram Society
Tower A, a building development in the Vakola neighborhood of the Mumbai suburb
of Santa Cruz. Adiga describes it as incredibly pucca, solid and permanent, a stalwart presence against the
surrounding slums:

Vishram Society is anchored like a
dreadnought of middle-class respectability, ready to fire on anyone who might
impugn the pucca quality of its inhabitants. For years it was the only good
building -- which is to say, the only registered co-operative society -- in the
neighborhood; it was erected as an experiment in gentrification back in the
late 1950s, when Vakola was semi-swamp, a few bright mansions amidst mangroves
and malarial clouds. Wild boar and bands of dacoits were rumoured to prowl the
banyan trees, and rickshaws and taxis refused to come here after sunset.

The plot is set in motion when residents of Vishram Society
are made an offer by a building developer, Dharmen Shah of the Confidence
Group, who offers to buy their apartments at a rate of 19,000 rupees per square
foot so he can tear down Vishram and build luxury high-rise apartments called
the Shanghai. At this rate, the average payout per family would be about
$330,000 in a country where the average per capita annual income in 2008 was
$800.

The book uses a Vertigo-inspired cover but the plot is less a psychological thriller and more a
psychological game of iron wills. Vishram’s decision must be unanimous
according to co-op bylaws and must be made by October 3. It is a five month
countdown but not everyone in the society wants to sell, and as each week
passes, the dissenters fall like pawns, except for one person.

Highly-respected Yogesh Murthy, known as Masterji, is a recently
widowed and retired schoolteacher. Much like Hitchcock’s enactment of vertigo
through the obsessions of his characters, Adiga has Masterji dizzyingly revisiting
the same moments over and over again, consumed by the death of his wife and the
accidental death of his daughter. The persistence of Masterji’s obsession with
the memories of his wife and daughter is pitted against the weight of Shah’s
offer. Photo of the author by Mark Pringle

Adiga doesn’t allow us to hate Shah because he doesn’t rely
on caricature. Shah isn’t merely portrayed as the exploitive evil developer.
Through Adiga’s careful representation, we get glimpses of Shah’s humanity, his
weakness, his random kindness, his spiritual side, and his own moral code in
which he believes in honesty and fairness. Shah doesn’t believe in his own
villainy but he is aware that that is what he is in their eyes. While
attempting to convince left-wing radical communist social worker Mrs. Rego to
take the money, he muses, “A social worker needs a builder. We make each other:
she can be so pure only if I am so evil.”

And Adiga doesn’t let us blindly root for Masterji. We
admire Masterji for his resolve but we also start to doubt his intentions and
his character. Is pride the only thing keeping him from accepting?

One of the great pleasures in reading Last Man in Tower, much like a Zadie Smith book, is Adiga’s
collection of characters. He is a master of observation and shows the intimate
gestures between people which say volumes about their relationships. Adiga
carefully constructs the worldview of Mumbai’s middle class. While you feel
disgusted by the greed underlying the extraordinary measures they take to
pressure Masterji to accept Shah’s offer, you also commiserate with them. Their
motivations are moving and sweet. It’s difficult to judge them because we see the
difficult position they are in: they are trapped by their desires to provide a
better life for their families.

With wit and dark humor, the journey of the residents of
Vishram depicted by Adiga gives us food for thought but he isn’t interested in
raising questions about whether or not human nature is inherently cutthroat. Instead,
he explores the corruptive influence of money on kind and decent people. Those
who think selling out is unacceptable or selfish may disapprove of Adiga refusal
to apologize for the Vishram residents. But this is exactly the point. Adiga
encourages us to draw our own conclusions and to question our own ethics. I may
not agree with how the characters carried out their actions, but Adiga suggests
that those types of decisions lie with the person making them and that we all
have to live with ourselves in the end.

Jenny Yap is a
lecturer in the English Department at California State University, East Bay. She
might be willing to sell out her neighbors if the right offer came along. 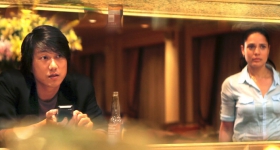