The biggest TV story of the week was undoubtedly Ven and his callous attitude toward his client Terri on Project Runway. It was Runway's traditional non-model client episode where the designers had to dress "normal" women, in this case giving them makeovers at the request of the women's friends. As soon as Ven saw Terri, whose body does not resemble those of the stick-thin models the designers usually work with, he began complaining. He was angry about the unfairness of getting a plus-sized woman while other designers were assigned slimmer girls. His exasperation was clear as he grumbled and sighed his way through his client meeting and preparations, and he dug into his perceived problems with real relish when Tim had his workroom visit. "Oh my god, I'm thinking around a 14," Ven described to Tim in describing his client's size (a 14 is just on the cusp of being considered plus-size, by the way). He went on to say that Terri has no sense of style, is not fashion forward, and her "before" photo is "definitely a nightmare." Ven also made a point to mention his client's age ("She's almost 40!"). Jeez. Tim seemed a bit taken aback by Ven's awful attitude, but I think we might have seen an out-and-out scolding if Tim knew about what came to pass after his visit. Ven looked about this happy all episode.

During his client fitting, Ven repeatedly told his client -- who wanted a look with color -- that he chose to use black because "it's slimming." He also brought her belts to try on that were too small, and reiterated this fact several times. "You keep saying that. It's embarrassing," poor Terri finally said. While Ven was gone, she cried and was consoled by her friend. "It's just so disappointing." This is such an incredible shame, since Terri seemed like a completely easygoing woman who had a casual, comfortable look originally and seemed pretty easy to please. Some of the other women were rigid and demanding, requiring that their dresses have specific, unflattering elements that the designers struggled with. No mention of that "unfairness," however.

On the runway, Ven landed in the bottom for the first time, and it's not hard to see why. The high waist of Terri's skirt perfectly aligned with her draped sleeves, creating the illusion that she had virtually no torso. The shiny turquoise fabric that Ven picked for the top was unflattering in both its color and drape and honestly looked like a piece of fabric pinned together like a shoddy robe. For once Ven's usual structured, polished look would have been totally appropriate and a fitting change, but he dropped in in favor of figuratively throwing up his hands, and the judges zeroed right in on it. He didn't try to hide it, either, telling them that this was his first time working with a real woman, and some of the other designers lucked out with their clients. "A 'real woman,' what is that?" Heidi responded. Oh, yes. She also observed that the outfit was clearly not something that Terri would wear, and that there was a real lack of communication between Ven and his client. Here Terri's friend stepped in, telling the judges (in tears) that Ven didn't ask enough questions about this selfless woman, as if he didn't care about her. Heidi told her that she's a good friend, and Terri deserved to look fabulous. "Ven, it's your fault," she snapped. The judges discussed Ven's complete uninterest in his client, his selfishness, and his total disconnection from the outfit he designed. Although Heidi tried to make it seem as though Ven would be eliminated in addition to another designer, in the end he was not sent home. I'd say that I hope this fear might have moved Ven to reconsider his ways, but it's pretty clear to me that it did not. How disappointing, indeed. We're down to the top ten on So You Think You Can Dance, which means ALL-STARS! As usual, we opened with a group number, but Cole was absent until the very end, when he stood on a ladder and yelled "Cut" through an old timey director's megaphone. It turns out he was "slightly injured," a vague description that wasn't elaborated upon. For his performance, Cole was paired with all-star Anya on a cha-cha. We all know that Anya is a wonder with ballroom, but I thought that Cole kept up with her pretty nicely, exemplifying his usual deliberate moves and attitude throughout, even during an especially impressive trick when he did a sort of sliding split under Anya's legs (you have to see it to believe it). Cole, so happy he didn't have to button his shirt.

The judges, on the other hand, were not so impressed. Mary said that he did "a tremendous job," but Cole needs to apply more pressure to his feet. She also didn't get any real connection between the pair, so she couldn't put Cole on the "hot tamale train" as he had hoped she would. Nigel, who up until now has slobbered all over Cole's performances, said that he was "a little bit disappointed with [his] connection with Anya," adding that Cole was expending too much energy connecting with the audience instead of her. There are weeks when I would have said this about Cole's tendency toward overperforming, but I liked him this week. He was safe, but I wonder if the judges' relatively harsh words will hurt Cole next week.

And I can't forget to mention our (well, my) favorite all-star of all time, Alex Wong, who returned to dance a haunting contemporary piece with Eliana that showed off all the athleticism, emotion, and just plain awesomeness that Alex brought week after week. We love you, dude!! Have I mentioned that I heart Alex?

On Top Chef Masters, the chefs had to create a vegetarian/non-vegetarian pair of dishes for the Indigo Girls (I know, what?) for their Quickfire challenge. I will just give you Takashi's explanation verbatim, because I must [sic] throughout:

"When I was a kid [here we see an adorable photo of young Takashi], I love to eat meat, but we didn't have refrigerator. We can get fresh tofu from tofu guy coming to sell to you. Tofu could be great for both dishes, then I just add grated pork for the meat. [In a high voice:] Yeah, not bad! Not bad for Takashi!"

It's like he recognizes he is precious, and is cheering his own cute self on. Patricia, on the other hand, prepared pho two ways, but at the very end she waited a minute too long, and her broth never made it into her bowls. When the Indigo Girls tasted it afterward (by this point, Patricia had been disqualified), they told her, "If I'd had this, it would've all been over." Ugh, rough to hear. Takashi, on the other hand, got rave reviews for his tofu dishes, with the Girls impressed with his perfectly cooked eggplant and his beautiful textures. He took the Quickfire win, bringing his total earned donations to $15K. Takashi, again: "I almost cry ... I'm getting very quick cooking a very short time. Kind of fun!" I mean!! For the elimination challenge, the chefs had to make brunch for former Hugh Hefner girlfriend Holly Madison's pool party (I know, the guest judges could NOT be more random). Patricia went with pulled pork on toast, but it didn't go over well with the judges, who found the sauce boring and dull, and the bun bland and toasted too far in advance. Takashi made a yogurt panna cotta with berries and almonds that the judges found "stunning-looking," and while it wasn't a perfect panna cotta, they could have kept on eating it. He landed in the top, but didn't win.

Patricia was in the bottom. I groaned aloud when judge Francis told her, "We're at a party full of beautiful buns, but unfortunately your bun was not one of them." The judges dinged Patricia for advertising barbecue and not delivering, she explained that she had to chop the meat instead of pulling it because of time. In their deliberation, the judges wondered if Patricia was getting tired and starting to fade after seeing two missteps in a row from her, but she was deemed safe and Thierry was sent home, much to the chagrin of his pal Takashi. Aww, I'll miss seeing those guys and their buddy comedy every week. Patricia tests some melon (no hands!).

On Sullivan and Son, Ok-Cha posed as Steve on "Seoul Mates," a Korean dating site. She finds him a suitable woman, Grace Kim (played by Catherine Haena Kim), and upon meeting her, Ok-Cha begins grilling.

Ok-Cha: If your child got a B, would you punish him physically or mentally?
Grace: Neither...
Ok-Cha: Because if you raised him right, he'd beat himself.

This goes on until Ok-Cha realizes that Grace is the "wrong" kind of Korean woman (the nice kind), and so she pushes a different girl on Steve, this time from J-Date. Grace finds out about the double dating and throws a glass of water (actually, I guess it was probably beer) at Ok-Cha's face, causing her to realize that Grace was the perfect woman after all. And here I'm just wondering, who has all his dates meet him at his family's bar? Grace finds nothing weird about having a date with parents just a few feet away.

Asian mafia member Becca returned on Awkward., showing up when Ming couldn't open her locker with geometry test answers and her unlocking abilities. Ming asked if Becca knew anyhting about Fred, who she hadn't seen since the Friday before, and Becca claimed that she didn't know him. Hmm. In class, where Ming sits right behind Fred, he and the other Asian kids completely ignored her, and Ming finally got answers when Fred met her in the cemetery and revealed that he's Becca's ex. Ooo. It turns out Becca's an "Asian bitch," which means she follows the way of the ninja: you never see her coming. Thus Ming's poor grade on the geometry test, despite the "answers," and the changed prescription in the glasses that Becca returned to Ming. I'm still on the fence about the way the show is dealing with Asian stereotypes; on the one hand, Asian American teens in (relatively) normal romantic relationships! On the other hand, "The way of the ninja?" Seriously? That just seems a little lazy. Still, I'm glad that Ming's storyline (not to mention Becca's) is getting a little depth. 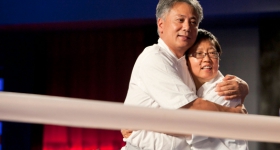