Katie Kitamura’s second novel, Gone to the Forest opens
with a disembodied voice that invites its listeners to throw off the shackles
of colonialism. Tom, the son of one of the first white settlers in this unnamed
country, hears the voice coming from a radio that has been left on their
verandah table. The only evidence of a second listener is the mild indentation Tom
sees on the chair that has been pulled up to the table. Might the spectral
listener have been Celeste, their servant who suckled Tom and continued to feed
his father’s voracious appetite for oysters, caviar, lamb, cheese, and gnocchi?
Could it have been Celeste’s son, Jose, who was born at the same time as Tom
but has always been stronger and healthier than him? Had the radio been placed
there to catch the attention of a white listener, to warn them that they were
running out of time?

There are more questions than answers in this beautifully
written novel. It is impossible to pinpoint even exactly where the action of
this novel takes place. Instead, the setting of this work is a seamless
quilting of sites that have been subjected to colonialism. The rebels in this
novel known as the Oath Takers are reminiscent of the Mau Mau in Kenya where
members were required to take an oath before joining the group. The Land Reform
Bill that is quickly shuffled through the colonial government echoes similar
legislation in Zimbabwe.

Planted in this tumultuous landscape are Tom, his father who
goes unnamed throughout the novel, and the mysterious Carine who enters the
family as Tom’s fiancée after a halting courtship that lasts no longer than a
fortnight. Carine’s body becomes the site upon which both familial dynamics and
political anxieties play out. Yet, Kitamura is careful to remind us that Carine
is not simply a hapless pawn in this narrative. She acts as much as she is acted
upon.

While Kitamura’s carefully wrought characters are
captivating, one of the most striking features of this novel is the way in
which its non-human characters seemingly jockey to give readers insight into
this country and its peoples. Barely a page or so into the book and we are taken
to the river by which the house sits and the “carnivorous dorado [that] swim
through in herds.” By introducing these fish that are typically found in South
America, once again, Kitamura scrambles the location of this novel. Importantly,
animals and animal behavior provide the humans in the novel with the language
they need in order to understand each other. Tom sees his father as a dorado. The terror that the hungry dorado
with its large size and thrashing body induces in Tom mirrors his continued
fear of his father. Even Tom’s memory of his deceased mother is eclipsed by
their regular visits to a neighbor where she would disappear inside leaving him
to hear the shrieks that “sounded like an animal dying, painfully.” This very
particular aural memory of his mother’s affair leaves an imprint upon how he
perceives sex. When his father proceeds to sleep with Carine, all that Tom
hears are the sounds of “animal bellowing.” Hearing these sounds even trigger
the skin ailments he had as a child where Tom developed scales on his elbows
and knees such that the locals called him “Lizard Boy.”

It
is not just these non-human animals in Kitamura’s novels that give readers and
the characters the vocabulary with which to talk about their lives. The natural
landscape itself is an insistent presence that demands our attention. Early on
in the narrative, a long dormant volcano erupts and transfixes the community.
This volcanic eruption and the dusting of ash that follows provoke the white
settlers to gain some kind of control over their surroundings. Kitamura writes,
“The first day the mountain exploded, the old man held drinks at the farm.
Among the whites, across the valley, there was a mood of hilarity.”

Yet, the seeming order and civility of the evening erodes as
the day goes on, culminating in an explosive scene of sexual violence with a
blast radius that extends across the rest of the narrative. In her telling of
this moment, Kitamura masterfully evokes the disbelief, disorientation, and
resignation that Carine experiences. She does so with the lean and tight prose
that characterizes much of this novel. In the closing pages, you can almost sense
the desperation of the characters as they contemplate their imminent futures.
Kitamura leaves readers with even more urgent questions than the ones with which she
first introduces this cast of characters to us.

Dashini Jeyathurai is a doctoral candidate in
the Joint PhD program in English and Women’s Studies at the University of
Michigan, Ann Arbor. She blogs for the South Asian American
Digital Archive and has an article forthcoming in The Journal of
Commonwealth Literature. 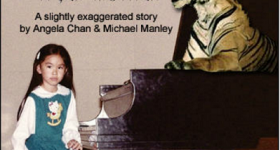