Am I imaginging that Kristen's shooting Josie some side eye here?

Okay guys, we've got some new shows to discuss this week, but we can't go another moment before mentioning the tragedy that was this week's Top Chef. If you'll remember, Kristen and Sheldon went head to head as the leaders of their respective establishments in this season's restaurant wars. To cut to the chase, Kristen went home. Kristen! One of the best (if not the best?) chefs in the whole lot! She made a few missteps because this was her first time ever running a restaurant, but her fate was sealed when she refused to look like a weak backstabber in the end. But I'm getting ahead of myself.

Although Sheldon was one man down and only had two teammates, neither of whom had ever cooked Filipino food before, Kristen (who had three teammates) was the one who found herself in real trouble when her risky decision to cook dishes to order was paired with Josie's perpetual time management problems. First, Josie ran out of time to roast the beef bones on the first day of prep as Kristen asked, then Josie wasn't able to add gelatin to the beef bourguignon sauce. The animosity between the two women was palpable in the chaotic, backed-up service that was a total contrast to Sheldon's calm and cool head during his service. His pork adobo was named the best dish of the night, and in the end, Sheldon took home the win and a new car. Hooray! When Sheldon's excited, he has to hold his hat onto his head.

Back in Terrible Town (sorry, Atelier Kwan), the judges found Josie's halibut cooked incorrectly, the beef bourguignon totally missing sauce, and Kristen's deconstructed macaron too far from its inspiration. It came down to the two women at judges' table, and problems arose when the judges mentioned the missing sauce and Josie claimed that she would have added more. Why she didn't say anything at the time is unknown, and why Kristen didn't mention Josie's perpetual falling behind to the judges is also a mystery. "At the end of the day it's my responsibility," she interviewed, acting as if mentioning the huge missteps made in the kitchen would have been throwing Josie under the proverbial bus. As Tom said himself about Josie on his blog, "It’s bad enough not to do what you’re asked to do, but it’s a whole lot worse to say you’re going to do it and only afterwards reveal that you didn’t… time and again. Had we managed to discover this at Judges’ Table, the outcome of the challenge would have been different, but Kristen wouldn’t divulge it, insisting that the buck stopped with her." Note to everyone who ever finds themselves in such a situation: if you screw up and it's revealed, that's no one's fault but your own. But if other people cover for you, well...that's on them, unfortunately. I appreciate that Kristen was trying to do the "right" thing, but in this case, concealing the truth did nothing but sabotage herself. Let's hope that Last Chance Chef gives her a second chance. Kristen's "What Have I Done?" face, possibly?

Premiering this week was one of my favorite show -- special effects make-up contest Face Off. Competing this season is Alam Park, a 25-year old from South Korea who now lives in Seattle and recently graduated from makeup effects school. We didn't get to see much of her or her work in the premiere, as she landed in the safe middle in both the foundation and elimination challenges, but the goblin king she made with teammate Chris was impressive (and freaky!) enough that I'm looking forward to what else she can do. Plus, I liked what she said in an interview describing how she felt before hearing the judges' decisions: "I'm trying to be happy and I am happy because it's crazy that I'm already here." Good attitude, am I right? Not a dude I'd want to mess with

And then there was the premiere of American Idol, which unfortunately was not as promising. Among the cringe-inducing auditioners was James Bae from long Island. The 15-year-old considers himself a rap artist and a pop artist not unlike Justin Bieber. He then butchered Bieber's "One Less Lonely Girl," but I have to say that Nicki Minaj won endless points with me when she brought him up and told him, "I love that you own it. I would never do this when I was your age." Mariah also suggested that he be a DJ instead of a singer, which is neither here nor there, but it was nice to see them being kind to this kid instead of just going for the easy mockery. When asked afterward if he was disappointed, James replied, "Not really because Nicki Minaj kissed me." Well, there you go -- a happy(ish) ending.

But that wasn't all I'm sorry to say. Next we met Albert Chang, who is 25 years old, from Queens, and a medical clinic receptionist. Where James was portrayed as a somewhat deluded kid, Albert got the full foreigner edit with subtitles for his accented statements and the reveal that he has no idea who the judges are. His rendition of The Phantom of the Opera completed his freakshow persona when he went into a disturbing falsetto, and this time the judges did not spare his feelings. "Your range is better than Mariah's!" Nicki exclaimed with sarcasm. Oh, Albert. Why.

Finally, we met Gurpreet Singh Sarin a 22-year-old college student from North Potomac, MD. He has 40-50 turbans and changes them to match his outfit (at his audition he sported a lavender one to go with his shirt), giving him the nickname "Turbanator." He sang a sweet version of "Sunday Morning" by Maroon Five and gave the judges a bit of classical Indian singing after being prompted. Nicki found his voice "pretty" but "not standout." Keith found Gurpreet's voice a little too light and said no, but Mariah and Randy gave him a yes. It came down to Nicki, and Gurpreet told her that he has "a marigold turban like [her] hair" ("marigold" is a nice way of describing the neon wig she was sporting that day). She gave him the yes he needed for Hollywood after shortening his name to "Turb." See you soon, Gurpreet! In the meantime, check out more of his songs here. That really is some good turban matching

Over on Go On, Yolanda brought Japanese goal-setting dolls (daruma) to the group and explained how you're supposed to write a goal on the bottom. "My angry grandmother in Tokyo sends them by the crateload. She writes the goals in for me in Japanese. 'Find a man.' 'Be taller.' This one is kind of idiomatic, but it basically says, 'Stop sucking.'" After dropping off this plot device for the rest of the group, Yolanda went on to begin her new job in anesthesiology at the hospital where fellow group member Sonia works. For some reason, Sonia convinced Yolanda to pretend to be "cool" to fit in with Sonia's group at the hospital, so Yolanda pretended to be a hard drinking partier who comes into work hungover every day. Surprise, the act led to her getting in trouble at work. Yolanda's good girl ways won out in the end, but I wonder whether she'll still have her job next week... Yolanda's a little too proud of sharing disappointments

On The Colbert Report, legal scholar Akhil Reed Amar discussed his book America's Unwritten Constitution, which examines the understanding we have of Constitutional law that is not stated outright in the Constitution itself. The founding fathers did, however, allow for the expansion of their words within the document. Pretty smart guys, those founding fathers. 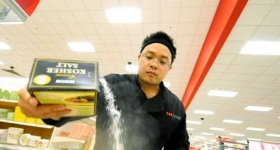 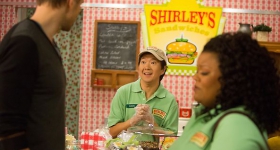 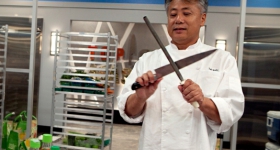 LTE wrote on Tue, 01/22/2013 - 2:26pm
"The founding fathers did, however, allow for the expansion of their words within the document" . I can't say that interviewed offered much of anything to learn from. . From a 60 Minutes interview, a man who deals in law, the dreaded Supreme Court Justice Antonin Scalia: . http://www.youtube.com/watch?v=FrFj7JAyutg