Tamiko Beyer’s collection of poems, We Come Elemental, confirms the arrival of an exciting new talent, a poet whose ability to mine seemingly infinite meanings from objects and ideas permits an exploration of the contradictory, paradoxical, and complicated nature of human existence. Beyer thrills with her capacity to observe and render into succinct and lyrical language a bold commentary on the difficulties and limitations of human experience.

In her book, Beyer makes use of the materiality of water to challenge various confines and boundaries in both the personal and public realms. Her poems harness many qualities of water: its existence as the most basic element both within and outside of the human body; its ability to flow and create movement; its formlessness yet also its ability to take up any form; its cooling, healing, and reviving powers; and its cyclical nature of disappearance and reappearance through evaporation and descent from the sky.

We Come Elemental is divided into three sections: “Body Geographies,” “Dear Disappearing,” and “Tenacious as Salt.” “Body Geographies” explores the body as a site for both confrontation and intimacy; “Dear Disappearing” unpacks experiences of the forcibly gendered, marginalized body; and “Tenacious as Salt” examines the continuity between and among idealized bodies unfettered by gender and other social constructs.

In the first section of the book,“Body Geographies,” Beyer locates traces the speaker’s reaction to societal injustices, particularly those based on gender. The speaker interrogates the various forms of co-optation and re-appropriation that calcified gender roles impose on the body’s geography, resulting in “[t]he condition of having a body/turned into itself,” that is, a body forced to inhabit an unnatural, alien condition.

Poetic utterance in the collection becomes an act of courage that galvanizes reader resistance as the plural use of “we” in the concluding lines of the poem “Compass”:

We’ve set the center askew.
When we can no longer lift the stunning map.
When we no longer need permission.

The poems here demonstrate the dehumanizing limitations imposed by cultural compartmentalizations based on gender (“the space without walls,/without windows, but with a roof”). Beyer’s  verses betray these social constructions by eliciting comparisons between man-made structures against the organic and natural existence of water. In two parts from this first section of the book, “Water West” and “Wade,” we see Beyers make these adept comparisons:

In each of the instances above, water is portrayed as a force that resists limitations (the concrete dam in “Diablo”) or that overcomes them via drowning (the attic’s drowning in “Wade”).

In other poems in this first section of the book, the speaker, using as metaphors different changing bodies of water, cannot drown or overtake boundaries, instead hones in on the fluidity of water that can flow into gaps. These gaps often can be seen to represent weaknesses or fissures in hardened societal impositions. For example, in “The Water in You,” the speaker portrays defiance through stealth insertions and penetrations of fluidity between crevices: “Slippery folds of the largest/body and its needs./I in the seams of your skin.” In the book’s mid-section,  “Dear Disappearing,” the speaker considers the body--what she deems as “our ridiculous bodies”--as prisons that can limit or deny the self of certain possibilities. The phrase “Dear Disappearing” signifies motion, yet also suggests a kind of stasis resulting from the incompletion of the action. Beyer unpacks the interplay of tensions between the positive and negative connotations that the word “disappearing” carries – the idealized end to gender discrimination on the one hand,  and on the other hand, the losses that must be sacrificed to achieving such a goal. What emerges is a sense of indetermination, a precarious, amorphous state, beginning to take shape yet without definite borders.

As with the first section of the book, Beyer questions and pushes against the limits of the body as an enclosed physical space, and in its place posits the possibility of limitlessness, as she quotes Malin Hedlin Hayden in the subsection’s epigraph:

…where do we begin and where do we end?
At our skin? Or as far as we can see?
…What sort of place is my body?
…what is the body a place for?

The reference to “as far as we can see” to describe other infinite possibilities of viewing and contextualizing the body is later disappointed by the speaker’s view of reality: “[w]e are all seeing what we wish.” But this contradiction also betrays the false divide between the body and the external world when themes are later re-iterated from the book’s first subsection arguing for the continuity between the body and the external world that are both composed of the same element of water.

Perhaps the most striking passage in the section, “Dear Disappearing”--and perhaps the collection as whole-- is the assertion of the only imperative statement in the entire book, which urges readers to “[b]e not contained.” Instead of a prison, the speaker analogizes the body to expansive geography. Moreover, even a span of geography can be limiting if sacrificed to imperialism. Here, the speaker makes the most overt and brazen political statement in the collection:

Sure the best country this once and always was.
The best one the worst it’s just a technical matter
definition clarification. Let us try ::  did we not build
the bomb the big one the one to end all ones?

The use of “we” implicates the speaker, as it does again in the passage below:

Yes! Our claim our geography our ever-always
optimism quivering in every blade of prairie grass

The self-implication in the use of plural pronouns takes an ironic turn here, ostensibly celebrating American optimism while really uncovering its weak spots. The use of “quivering” here brings to mind tremors resulting from either fear or undesirable climate. However, there are double meanings at work: Employing an ironic tone, the speaker is less fearful than indeterminate, inhabiting the very tension between possible meanings.

While “Body Geographies” focuses on the body as a site for confrontation between self and social mores and “Dear Disappearing” explores the body’s marginalization, the final subsection, “Tenacious as Salt” follows the connectedness and fluidities between and among bodies where no “borders” exist and are blended into “a mess of desire.”

The poems in the final section, “Tenacious as Salt,” Beyer weaves together a couple’s memories and impressions. Poems describe a range of intimate interactions from commonplace moments such as sitting at a beach or taking walks (“Water East,” “When the Weather Quits You”), to dramatic declarations of yearning or epiphanies (“The Seasons and Their Tremendous Rules Are Breaking,” “Sea Change”). The speaker moves beyond acknowledgment of personal desire (“I have a firm attachment to the progression of a year/and to her delicate body.”) to a bold assertion of her desire’s power to unhinge societal structures as in “The Seasons and Their Tremendous Rules Are Breaking”:

When she and I step into the world’s vast rules,
we refute anomalous mirrors. Ever so natural

As the couple proceeds with disrupting gender roles to “refute anomalous mirrors” by virtue of their simple togetherness, the couple betrays not the unnaturalness not of their relationship, but that of the “world’s vast rules.”

In “Continuity,” the speaker argues that “gender becomes an object” through the act of writing, speaking, or any use of language. The view of gender as an “object” here suggests the desire of being able to control and act upon gender rather than having it control and act upon oneself, which is a fuller kind of self-actualization. The speaker later admits the real purpose behind this goal at the end of the poem: “I want to become the woman your parents/never dreamed for you […]

In We Come Elemental, Beyer proves herself to be a skilled and meticulous writer. The collection is impressively well-conceived, cohesively structured, impeccably crafted, and very well-written. Through the use of water as a unifying metaphor, Beyer illustrates the power of poetry to function as both social critique and personal empowerment. 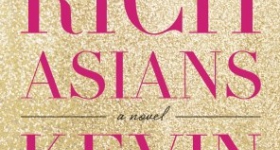 Our Favorite Comfort Foods: A Community Collection of Recipes
How to Be An Anti-Racist, Pro-Black Ally: A Resource List
When did you first recognize me as your own?: A Folio of Undocupoets Fellows
Deconstructing Cookbooks
September Lit: "the ear of the sky" by Kimarlee Nguyen
Take 5 with Abbigail Nguyen Rosewood
An excerpt from "Made in China: A Memoir of Love and Labor" by Anna Qu
“Turning Red” Review: Pixar’s Y2K Nostalgia Trip Makes History
Interview with Jane Pek
On Shattering Barriers with 22-Year-Old Emma Eun-Joo Choi
The Real Forbidden City: An Interview with Vanessa Hua
"Fruit" by Iris A. Law
Two Poems by Neil Aitken
Cultural Cringe
Listening Through Generations