For the past couple of days, the conversations between my husband and me have been about this recent Vice-sponsored trip that Dennis Rodman and the Harlem Globetrotters took to North Korea as part of a documentary HBO is producing -- the event has become a bit of a media circus. It's taken longer than usual for us to break down the icky feelings we have about these sort of media antics and about coverage on North Korea in general.

The Vice Guide to North Korea was produced five years ago, which we only recently watched in its entirety. Admittedly, we have only a very cursory knowledge of the situation in North Korea -- culled from anecdotes from his mom on locally-reported news in Seoul, what our mainstream media chooses to report, and various Reddit posts. The original Vice series was actually an interesting look at what a state-sponsored tour of North Korea looks and feels like, at least from the perspective of a white guy. Not that I'd know any better from personal experience, but various people on Reddit, who have actually been to North Korea, criticize the coverage as being sensationalist and that the crew could not have been in as much danger as they made it seem.

The general vibe I got from the Vice series was, "Wow, these people are so weird and they really hate us Americans!" which, when spoken by white folks about non-white folks, always gets a healthy side-eye from me. While my husband and I were fascinated by the tour coverage, Shane Smith essentially painted North Korea as this creepy ghost town of a country where everyone is brainwashed, seeming to gloss over the very real, very fucked up human rights abuses and the famine that's killed at least 240,000 North Koreans (possibly as many as 3 million).

So it's hard not to feel a little gross about this latest stunt, and I'm not so inclined to believe that this was, in any way, a peacemaking effort. Have you seen the photos of Rodman all buddy-buddy with Kim Jong-Un? He's just this eccentric but fun-loving dictator, and not the awful guy who lets his constituents starve to death that you all make him out to be!

There are plenty of reasons to hate Vice. I personally appreciate them for some things -- the foremost being bringing more Eddie Huang to my TV on a regular basis -- but I'm feeling mad queasy about this upcoming documentary. Your thoughts? 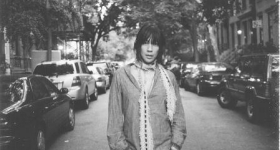 Anonymous wrote on Sun, 03/24/2013 - 9:38am
Have you seen the photos of Rodman all buddy-buddy with Kim Jong-Un Why the fuck would DENNIS RODMAN do anything but be as friendly and warm as possible to Kim Jong Un while in North Korea Reddit chick fag. And there was no sensationalism with the guide to North Korea. It seems like he was taking telling it like he saw it and like he thought it with no BIAS. "seeming to gloss over the very real, very fucked up human rights abuses" Im not sure what Vice guide to north korea documentary you saw, but the one I watched didnt have any images of people being abused. Making the doco pretty fucking unbias. Which, for some weird reason, is what I want when I see a documentary.