On the first and third Tuesdays
of every month from April to October, you can catch 24-year-old Sean Miura in
action, either pitching in behind the scenes or performing onstage at the
Tuesday Night Café in the Little Tokyo neighborhood of Los Angeles. The café is
the flagship program of the Tuesday Night Project, a volunteer-run organization
dedicated to the cultivation of the Asian American arts scene in L.A. Sean can
also be found in Little Tokyo attending various community meetings and events
during any other given night of the week.

Sean: My involvement is
basically hat juggling. I am primarily an administrator, a co-curator (meaning
I help determine the lineup), and a community liaison, but I am also an
occasional host, performer, publicity strategist, fundraiser, and staff meeting
DJ. We’re all community organizers outside of the TNC space as well, so we’re
all used to filling in as needed.

You mentioned in your video
audition for Mr. Hyphen that you can speak Japanese and Chinese. By a family's
third generation in America, more often than not, English becomes the only
language spoken in the home. What inspired you to learn other languages?

I definitely wasn't
"inspired" into it. Not at first, at least. My parents
made me give up Saturday morning cartoons for J-School [Japanese school], so
like any other bratty 8-year-old kid, I would mess around in class with my best
friend and not pay attention. Through all that I somehow picked up the
rhythm and basic grammar, but I was definitely not happy about it.

I had always known that our
family in America still had contact with our family in Japan, but it wasn't
until I hit middle school that I found out how rare that is. I had never
met a Yonsei [fourth generation Japanese American] I wasn't related to, so I
had no idea it wasn't the norm. Realizing that no one else in my
generation was studying Japanese and also that apart from my grandparents, no one
spoke Japanese, I took it on myself to learn to preserve that link. I
studied for about two years and then started teaching.

Describe a typical day in
the life of Sean Miura.

On weekdays: Wake up,
drive 40 minutes to work, work a 10 hour day from 9-7ish, head to Little Tokyo
for 1-2 community meetings or go somewhere far for dance practice, grab the
cheapest and healthiest (ha) meal I can, get into my car, get home around
1amish, watch an episode of the Amazing World of Gumball, sleep, repeat. There’s
usually a pretty bomb soundtrack during all that.

On weekends: Wake up,
breakfast or lunch with grandpa, day activities (usually involving either
kickin' it with friends on an adventure or getting creative work done at a café
like I am right now), probably more community meetings or events, dinner with
friends, then partypartyparty or sleepsleepsleep.

How and when did you get
started in dance? What styles do you enjoy performing most?

I was always interested in
dancing. When I was little I would put on dance shows for my family. I
would make tickets, set up chairs at the base of our stairs, and force my
parents and brother to sit through what I can only imagine was a 4-year-old
trainwreck set to Motown.

I remember there being a B-boy
in Christina Aguilera's "Come on Over" who I wanted to emulate, but
actually I think I started to teach myself stuff when I discovered K-Pop in
middle school and tried imitating Shinhwa and SES. When I got to college
I joined the hip hop choreo team Chaotic 3, and I was hooked.

Stylistically, I love
anything with a good groove or a heavy beat, so more 'traditional' hip-hop
choreo. I started a crew with a couple friends called "Ninjas for
Social Justice" that aims to use hip-hop choreo as a way to preserve,
share, and re-contextualize our community's stories. We also provide
workshops to community organizations, working with youth and college students.

I also teach in Norwalk, CA,
for a program called the After School Education and Safety Preparatory which is
a K-12 after school program that teaches students social justice, provides
academic support, and prepares students for higher educational attainment.
The program houses a Saturday Dance Academy, so I teach pieces that use
dance as a tool for self-expression and empowerment. Give them some love here: http://www.nlmusd.org/Page/2009! 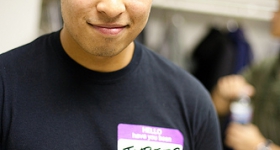