Angela gets back in the water! Woo!

Remember how last week I complained that Karen on Mistresses never
consulted her LAWYER-friend about the LEGAL issues that were plaguing
her life? Thankfully, the ladies had a chat this week, and Karen
went into detail about Sam's "schoolboy crush that he's taking too far", though she insisted that he's not dangerous. So...breaking into your place of work
and leaving you creepy notes on photos of you isn't considered
potentially dangerous. Got it.

Later, Karen went shopping for surveillance equipment at the hardware
store -- like ya do when you're not in danger -- where she ran into
Anthony Newsome, the insurance investigator. Oh, great! It turns out
he's done with his work on the case, but he did have one lingering
question for Karen: why did she say that Thomas wasn't suicidal when he
first spoke to her, when it was revealed in her (doctored, if you'll
recall) notes that he was? She said that she "didn't think it
was [her] place to interfere with his legacy," but then "the
investigation started to get much more serious, and [she] also didn't
think it was [her] place to obstruct justice." So her excuse was that she
doesn't understand how criminal interviews work? Actually, from what
we've seen of her, that's not the worst defense. Apparently satisfied
with her response, Newsome said good-bye, adding that she should give
him a call if she needs any help installing the security cam. Haha,
right. Like she's going to invite the guy who worked on an investigation
of a case in which she's guilty to her home. That would be preposterous!

Cut to: Karen's house, where there's three hang-up
voicemails and three missed calls from good old Sam Grey. She tried to
call him back (?!?!?!) but got no answer. She then curled up on her couch
with her tablet set to her security camera footage, like ya do, and
found that one of the cameras was out. No matter how many times she
tapped on the staticy box on her tablet, it just wouldn't work! Since Karen apparently
hates the three women who are supposedly her best friends (or maybe she
has a misogyny streak?), she had absolutely no one left to call but
Newsome, who is now familiarly referred to as Anthony. "Hey, no problem. But don't you have any friends?"

Anthony fixed the camera (and the broken light, while he was up there!),
and went inside with Karen for a glass of wine. They chatted, and he
went in for a kiss, but Karen did the first intelligent thing we've ever seen
her do and stopped him. "I've made this mistake before," she said,
undoubtedly referring to the other times she got mixed up with men who
were mere inches away from finding out that she prescribed lethal doses
of morphine to a now-dead patient (with whom she had an affair). "It's
not clean between us. The investigation is still open, and I need to do
the right thing here. And the right thing is for you to go." Slow clap
for Karen! She does have some sense of what's socially, emotionally, and
ethically acceptable!

Of course the high didn't last long: the next morning, as she went
out in her robe to get the paper, we see Sam watching her from his car.
Like the total creep that he is. Can't wait to see what kind of reasoning
Karen uses to call him up and invite him over on this week's episode! Anyone else
totally depressed that Yunjin Kim is wasted on this show?


Moving on, Sullivan and Son started right off the bat with Ok Cha getting into a
car accident. UGH! I screamed in my head. But then it turned out that
she wasn't the one at fault: she was rear-ended by a NASCAR guy, played
by an actual NASCAR guy! I have no idea who it was though, sorry. Anyway, there
was a whole joke about him figuring out all the costs in his head and
her teaching him how to drive; real turnaround of expectations, yadda
yadda. Too bad the whole "surprise" was based on the hackiest
racial/gender assumptions.


Later, Susan explained to her mom how she buys everything online
for cheap, something Ok Cha can't do because she doesn't believe in
having a credit card. "Credit cards are a one-way ticket to debt.
They're for stupid Americans to buy stuff they can't afford, and that's
why I don't have a credit card, and that's why America is China's little
bitch." Is it me, or is that not the MOST outrageous thing ever said? There's a fair
point buried in there somewhere.


What I don't understand is why later, when Susan got her mom her
first credit card, Ok Cha examined it like she's never seen one before.
"Shiny!" "Holographic eagle!" You work in a bar, lady! Are you guys strictly cash
only? Ok Cha then discovered online shopping, and I do mean
"discovered." She acted like someone who's never heard of the internet
before. Now I know that many older people (particularly immigrants)
aren't the most technologically savvy people out there, but even my
internet-clueless mom is at least familiar with Amazon. Whatever, I get
that it's in service of a joke. The joke being that Ok Cha ended up with
boxes and boxes of discount toothpaste, a fancy dog on the way, and a mountain of debt. She
fully realized her situation and despaired, "I've hit rock bottom. The
lowest of the low. I'm American."


Is it weird that I'm sort of glad that this was Ok Cha's storyline
this week? This is a really broad show; need I remind you that we
started with an "Asian women can't drive!" riff. Although it could be
argued, I suppose, that Asians and Asian Americans might be stereotyped
as either tightwads (think immigrants scrimping every penny) or
spendthrifts (think designer label obsessions), the fact that both
extremes exist here together and the fact that it's not a super
well-worn, tired cliche kinda passes for innovation on this show.
Progress?


On Push Girls, the ladies went on a trip to Mexico for Tiphany's
birthday. Everyone went kayaking, but as the only quadriplegic in the
group, Angela sat out for fear of losing control. She hadn't been in the
ocean for about fifteen years, and she was concerned that the special
kayaks didn't have enough support, and she wouldn't be able to manipulate
the paddles. Then the perfect solution struck: duct tape! They used duct
tape to attach paddles to Angela's hands (she can move her hands/arms a
bit, but she doesn't have enough dexterity to grip a handle), and she
was able to join her friends for a day on the water. So cool! A girl can do
anything with a little duct tape and ingenuity! One last note: how much of a bummer is it that neither So You Think You
Can Dance nor Project Runway, both Hyphen TV standbys, have any Asian
American contestants this season (at least that I'm aware of -- please
chime in if I'm mistaken)? Between that and America's Best Dance Crew
off the air, our numbers are way down this year. 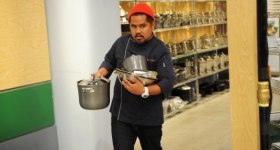 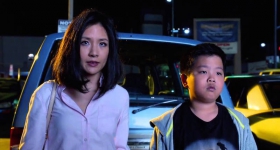