Jeff Chang may
have veered off his political career trajectory long ago, but judging by the
way he captivated a full house at New York City’s famed Nuyorican Poets Café on Tuesday,
Oct. 28, it’s easy to see that he has already been affecting change in an
equally powerful way: with the written word. Chang’s latest book, Who We Be: The Colorization of America,
was released earlier this month as a follow-up to his 2005 work, Can’t Stop: Won’t Stop: A History of the
Hip-Hop Generation, and the music critic’s deft rhetoric and clear voice
underscore the importance of open, direct communication in discussing topics as
complex as race and as controversial as what it means to “sell out.”

“[The book] is a
natural outgrowth of the way I’ve been trained to see the world,” Chang told
Hyphen recently of how the book came to be. “I’m dedicating this book to my
teachers and mentors, and that’s why it’s not accidental that there’s an
emphasis on women of color or feminists of color or Native American artists in
here. All these people helped me to learn how to see. And if [the book] helps
you to be able to see things in that way too, then that’s the point of the
whole exercise in the first place.”

With Who We Be, Chang examines how the world
of visual arts has come to frame the way we not only see, but also think and
discuss issues of race and class in a society that is, in his words,
“post-multiculturalism but not post-racism.” In it, he covers more than 50
years of a largely marginalized American history, touching upon everything from
cartoonist Morrie Turner and his 1965 strip Wee
Pals to Jose Antonio Vargas and his work with undocumented DREAMers, from
Shepard Fairey’s iconic Obama “HOPE” poster to Trayvon Martin’s tragic murder
just last year.

“Sometimes, I
say to myself, ‘Wow, it’s a shame that students now are still having to fight
the same things we had to fight 20, 25 years ago,’” he said. “But it makes
perfect sense. It’s because not even in a lot of our own programs -- ethnic
studies and American studies and the kinds of programs that we’re trying to
transmit this information through -- have we done a good job of capturing the
lessons and failures of those times. Because there were a lot of failures in
the 80s and 90s, and that’s a large part of where the genesis of this book came
from.”

Here, Chang
speaks out about the impending reality of 2042, when “minorities” will become
the “majority”; the rise of multiculturalism in the 70s; and Who We Be’s long, winding journey from
inception to publication.

Hyphen:
Just to cover some of the nuts and bolts of the process, can you tell me a bit
about how the idea of Who We Be came
about?

Jeff Chang: The genesis of the book goes all the way
back to 2006, when I had finished Can’t
Stop Won’t Stop and it was starting to gain momentum -- but it almost felt
like I had ignored an entire history in writing that book, even though I allude
to it a little bit in the middle chapters, about the rise of multiculturalism
in the early 80s, with people like Spike Lee and Julie Dash and all those
folks. And that was the generation of my teachers and mentors. That year, we
did an event with the Ford Foundation about hip hop and the
post-multiculturalism era, and on that same day, there was also an exhibition
up at the Bronx Museum that Lydia Yee and Franklin Sirmans had pulled together
on street art, and I looked at it all and thought, "Wow. There is so much to
capture here." It was like this hidden history that I had lived through but
that I hadn’t really processed.

[Writer and
Vassar University professor] Hua Hsu was actually also a large reason why this
book was written, because of his essay "The End of White America," which was a cover story for The Atlantic. It came out the month that Obama was being
inaugurated and it was a really hopeful piece. At that particular point, it was
kind of a fait acccompli that popular culture had been colorized, that we had
entered a new moment of visibility, that in some ways the multiculturalists
were still stuck in the old age of fighting invisibility. So the idea formed
from there.

Hyphen:
So that was 2006. Clearly a lot has happened since then, what with Obama being
elected to office and the (re)emergence of race as a major topic of discussion
within the mainstream. How has the passage of time impacted the book’s
ideologies or publication?

Jeff Chang: I couldn’t sell the book for many years because I didn’t
have any way of framing it in a way that people could understand. So I’d pitch
it, and my editor, God bless her, was like "Nobody gives a shit about
multiculturalism" -- and nobody did for a good while. This was 2006. So I was
like, "You’re right, you’re right." So I went back and retooled this proposal
over and over again, did a dozen or more drafts, worked with all kinds of
people, and got to the point where I thought I was insane. I was like, "Why do
I care about this so much? I should just get over it, you know?"

What changed and
what happened was that Obama ran for office. And Obama went to school in the
early 80s, he had been a part of the same protest rallies that we had been at,
and when he was at Harvard, he was the guy who was at the diversity rally who
was in the corner smoking a cigarette. Friends told me when they asked him to
get up on stage, he’d be reluctant, but then he’d get up there and rip it. And
so he runs for office and there’s this whole backlash at him for it, just for
him daring to be The Dude, you know? And this is sort of the resurgence of the
culture wars that we saw in the 80s and 90s. And suddenly my editor calls me
back and is like, "Let’s do this. I think there’s something here."

Hyphen:
How did you figure out what visual images or historical events and moments you
wanted to tackle in the writing of Who We
Be, given that there was undoubtedly such an immense wealth of material to
work with?

So I kind of
took these stories where they led me and basically, they led to this weird kind
of structure. I thought, "Wow, actually, so much of this is about crossing
over." Then I thought about Benetton, Coca Cola, BET, Fox News. At some point,
when I was writing, this whole Occupy thing jumped off, and there was this
whole thing about race and I was like, "Oh, that’s interesting." Let’s go back and tie that into these debates
on the left about a pro-multicultural progressive vision versus an
anti-multicultural progressive vision. So everything’s kind of gotten layered
in over time.

That’s sort of
how the process goes. I don’t start in with this thing of saying I need to talk
about the influence that Audre Lorde had on the movement. If that were to be
the story, which I think has been told elsewhere in amazing ways, then that
would’ve been the story. But instead, I think that I was cognizant of the
stories as they were coming in and I was processing it.

Hyphen:
How did you personally come to be so involved with activism and to care about
these issues?

Jeff Chang: I grew up in Hawaii, so I grew up a lot differently than a
lot of Asian Americans on the continent did. Or, for that matter, those who
grew up living between Hong Kong and here, or Hong Kong and Vancouver. Or
Taipei and LA. I grew up on an island where Asian Americans were, by the time I
came of age, pretty much running the show, even though in the media, there was
still underrepresentation. Which was a weird thing to think about now. Which is
why I was attracted to hip hop, but that’s another story.

So I came up to
Cal to go to school, to Berkeley, and immediately in the first three weeks or
so, I was involved in several racial incidents that these days would be unheard
of. But back then it was what it was. And I thought, "This is Berkeley, I
always wanted to be here, it’s one of the most liberal places in the country
and if it’s happening here, then…what?" That kind of threw me off. And that was
sort of my racial awakening, so to speak. So I spent a good portion of my
undergraduate years trying to unpack that. And then I started channeling my
anger into activism. That period of my life was really formative.

Hyphen:
You’ve also spent years in the music scene as a producer, DJ, and music critic,
which informed your work with Can’t Stop
Won’t Stop. Who We Be is all
about the visual arts. What is it about these mediums, do you think, that lend
themselves so well to starting a dialogue, to “channeling anger into activism,”
like you said?

Jeff Chang: Part of it is, in traditional thinking, change happens
because of politics. And yet, for anybody who has really been a part of a
movement, you know that you don’t necessarily dictate to people, and if you’re
in a movement that aspires to democracy, you don’t dictate to people how
they’re going to feel about different kinds of things. People have to find a
commonality of vision. People have to see things a certain kind of way. That’s
the job of culture. Therefore, people who are working in the culture -- thinkers, artists, writers -- are constantly shaping their particular
trajectory. It’s not just about the elected, or people with titles, it’s not
just about judges, it’s not just about people in history books, it’s a question
of how people are working in the culture to instill a kind of vision for change
on a day-to-day basis. So from the very beginning, we say cultural change
precedes political change, and cultural change is really the engine of social
change. And that’s sort of the slogan that we’ve adopted over the last 4-5
years in the work that we’ve done. And it comes from us being able to witness
how change gets manifest.

So the image of
umbrellas in Hong Kong or the orange ribbons in Ferguson, or [the phrase] "speaking my truth to power" -- all of that is changing people’s perceptions every
single day. I wanted to capture that. I wanted to kind of do in that sense not
a counter-political history, but certainly a celebration of history that
counters hegemony. I’m not saying that artists should be leading the world,
because it’s a very rare person who can bring together artistic vision with
political vision. It takes all kinds. But I think what I’m saying is that it’s
very short-sighted in a lot of our movements to be focused on policy alone. You
have to get to the center of the public sentiment that makes the policy change
even viable for your consideration, so that’s what why we talk a lot about
public strategy. 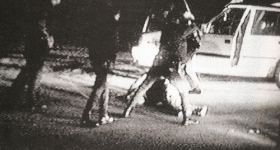