The author in his headier days. Photo courtesy
of Monsieur
Jerome.

I get a lot of smack talk for my clothing choices. "Michael," people will say, eyeing an eccentric bow tie, or some eye-blasting color combination, or silhouette-deforming hakama pants I've donned, "why, oh why, have you decided to wear that?" Usually, I change the topic. Or mumble something about how I want to look interesting. I do this because if I really went into the reasoning behind my look every time someone asked, well, I'd pretty much never stop explaining myself. So let me try to clear the air a bit.

But first, some background. I'm sure I'm not the first to write about a particular feeling that many Asian American dudes have (and certainly some Asian American women). It would be a special power if it wasn't so maddening: the feeling of being invisible. Invisible at the global level, such as in media and pop culture.  And invisible at the local level -- that is, standing at the bar waiting to order from behind a wall of white guys, or being passed over for a promotion. I won't go into the reasons for this invisibility, other more qualified folks can and have done that better. Just know that this invisibility forms a kind of background radiation for what I'm about to talk about.

For Asian men, we often contend with a second, related feeling of emasculation. And when you feel both invisible and emasculated, you end up doing some pretty strange things to get un-invisible, and re-masculated. Some of us turn to weight lifting. Some join the so-called "seduction community." Others hone our martial arts techniques (which, ironically, can have a counterintuitively neutering affect: when is the last time you saw a kung fu hero get laid?). Some of us squeeze triggers at firing ranges. The point is, you do things which are considered manly and powerful just so that you can become a blip on the radar of whoever you're trying to signal to, be it your boss or mate or whoever, and so you can signal your vitality in a vitality-obsessed culture.

This has never appealed to me. I found it strange to try to play a game of overly manly man one-up-manship when the game itself seemed not just rigged against you, but set up to have few winners and legions of losers. The manliest man I know, my grandfather -- isn't manly because he can bench press a lot or bedded many women, but because he was honest and kind and loyal. Basically, I don't want to play Patriarchy (™). But as much as I love my grandpappie, I'm not him, and I have separate motives. So, the problem: how could I be seen and simultaneously show my disdain for conventional masculinity? Enter fashion. 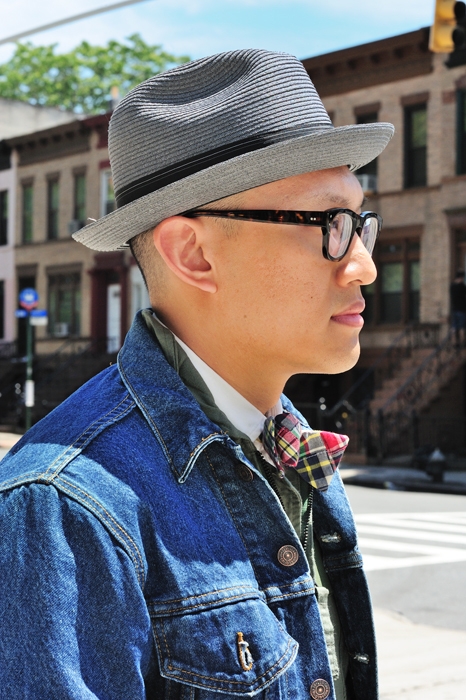 The typical assumption around men's fashion is that dressing well helps make you "look better", which is code for "look more manly." It is here that I found where I could confound the normal gender rubric with my own bit of culture jamming, with my own style (pun intended) of activism. If clothes are a product of gender normative thinking, then teasing or even subverting these rules could two-fold break the spell of invisibility and emasculation cast on me, and perhaps others who feel like me.

So there you have the rationale for some of what you'll find in my closet. Bow ties. Plaid-on-plaid. Power clashing. Drop-crotch pants. Clothing choices got me attention, sometimes good, sometimes bad, but to me it didn't matter -- I had already won because I was seen. I had cracked through the shroud that many Asian Americans often feel encumbered by. The right clothes worked as an un-invisibility cloak, making me distinctive despite that norm of invisibility which I believe works against many of people of color. My fashion choices didn't always follow directly from an intent to subvert the powers that be --  but to me they weren't just a fashion statement, they were a political statement.

To be sure, I'm far from suggesting that my Asian American brothers and sisters ditch their jeans and hoodies and turn to a life of drippy shirts and leather pants. I'm not a stylist and hey, even I still love a comfy pair of jeans and sneakers from time to time. Further, I do think there are serious shortfalls with trying to be an activist through clothing. Nowadays, my fashion-as-manifesto flag waving has waned, but only in execution. As I write this I look less runway and more #dadcore (a friend just said I looked like an evil version of Ben Stiller's character from Reality Bites). Blame it on age, or on New York City, a city whose literal grittiness necessitates a closet full of somber black attire.

Nevertheless, I am suggesting that fashion can be and is a powerful mode of not just personal, but political and social expression -- clothes aren't always just skin deep. And I believe that Asian American men in particular can find fashion as a surprisingly potent tool in a struggle to be seen and heard, because of the space we occupy in the racial dialogue. The next time you go clothes shopping, ask yourself, "can my wardrobe be political?" Try it on for size.