All I remember about that balmy evening in campus town were the lights of the 12 W Teal MTD bus against the sorority girls tottering in two stops after me.

One particular voice loomed over my seat from a tipsy girl hunched against a pole. Maybe the alcohol made her speak brazenly, but I felt my face flush as she crouched near my seat, croaking, “I need CHOPSTIX, like, right now. I could kill for Orange Chicken.”

The tiny establishment down on Green Street, Chopstix, complete with blacked out windows and neon signs, served American Chinese food to drunken masses until the wee hours of the morning. After demanding Chinese takeout from me, the girl slipped into snickers for the duration of the bus ride home.

Her diversity education spanned as far as the ethnic restaurants down the main stretch of road. “Chinese” was shrimp lo mein, buns and fried rice; just like “Thai” for her meant just pad thai and “Indian” meant curry and samosas. While her late night palate grew adventurous, her perspective about minority cultures narrowed to this one avenue of consumption.  In this town, I was merely the flavor of the day. This girl revealed the shortcomings of singular exposure to intercultural relationships, making an effort to find diversity only when hungry.

This was the first time I’d been associated with wannabe Chinese food. I felt far from exotic or “special,” just overwhelmed by her degradation. I was meat—nothing more, and definitely not with any discernible feelings or character. Then, I could have found solace in spoken word artist Franny Choi’s “Pork Fried Rice.” Unfortunately, sexual objectification by means of ethnic food is more the rule these days than the exception. Once called out, the perpetrator confines his victim to a dish. He wants her to be easy, pleasing and a temporary fix to hunger. The coarse words never sound like a compliment. To him, the dead meat has no say in how it is consumed and has little value as a cheap meal.

What do these words mean from another girl? That I deserved only to cater to her, give her what she wants? Like the man in Choi’s poem, she expected me to obey and smile with a “Thank you, come again.” She had called me out to shame me. Once off the bus, she probably forgot about this remark. But with it, she destroyed my self-worth. I didn’t belong here. I wasn’t beautiful. I couldn’t fit in, even if I avoided all the Asian restaurants on campus. The orange chicken doesn’t insult or fight, it merely waits to be eaten.

I’m no stranger to small town discrimination, having grown up in Northwest Arkansas. When you live down South, people assume if you look different, you must act differently. Young and naïve, I did my best to live up to their expectations. If I couldn’t be the All-American girl, I could be the side dish. Besides the outright racism, the comments damaged me the most. “Of course you aced that test, you’re such a nerd.” “Who would ever want to marry you? Gross.” “Not to be mean, but your food always smells terrible.” None of my grades, my laughter, or even my voice were my own. I curried favor, never leaving behind anything I could be proud of. I constructed a caricature of myself, letting my real self wither away in footprints of what others thought of me.

This is the problem with orange chicken. It caters to Americans with a Chinese name stamped on it. The dish is meant to please its audience. I, too, assimilated and brushed aside even my name, fearing it too hard to pronounce. “Sherry, not Yue.” It’s that fallacy of a single image, a single idea, which prevents complex human relationships from developing between cultures. It’s easier to takeout than to take in. I didn’t stand a chance. Perhaps she wanted me to forget who I was and assume the “perpetual foreigner” costume. To her, I could never be a whole person.

That night, I felt like the mangy bits of leftovers on Styrofoam. It was akin to other moments in the South, when kids stretched their eyelids and called me a “fucking Chink.” Hollowed out and emptied, she left me with scraps of myself. I have never been able to look at orange chicken the same way. It tastes too much like bitter defeat and the promise that I could never belong. Americanized Chinese.

Yue Sherry Yuan is currently, and always, in-between things. Finishing
up a double major in English and Psychology in Urbana-Champaign, she
also writes for the Food & Dining section of Buzz Magazine. When not
writing papers, she's usually swing dancing her life away and blogging
about the adventures that unfold. 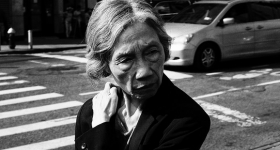