“Always listen to
your mother and study hard,” my grandmother said. I could see tears dripping
down her cheeks. “I know you can do it. I believe in you.” She held me tightly,
stroking my face before I headed to the terminal.

Thirteen years later,
we reunited -- but by this time, my grandmother was critically ill.

My grandmother is
the most caring and loving person I have ever known. When my parents divorced
in South Korea, my grandmother was there for me. I lived with my mother, my
older sister, cousins, and my grandparents. Every time my grandmother came home
from work, she cooked food and cleaned the house for everyone. When my mother was
not around, my grandmother spent time with me and made sure that I did my
homework before going out to play. Sometimes we watched movies or hung out at a
local park together. She was like my second mother, my best friend, my role
model.

But when I moved to
America with my mother and my older sister, my relationship with my grandmother
started to fade. Growing up in America as a teenager, I began to assimilate. Though it was not an easy process, I became more
comfortable living here. Eventually, without fully realizing it, I
started refusing to speak Korean. I began to dismiss childhood memories and
feel disconnected from my relatives in South Korea as I forced myself to
become American. I thought the only way to survive and to succeed in America
was to let go of my Korean identity.

In 2013, my aunt
called and told me that my grandmother, then 90, was seriously ill. She had
suffered a stroke and been diagnosed with Alzheimer’s disease. She was also
undergoing treatment for quadriparesis and cognitive dysfunction following her
stroke. All I could think was that I might not see her again.

As a DACA recipient, I knew that I could apply for the Advance Parole program and receive a traveling document that would allow me to return
to the U.S. after traveling abroad. After months of preparation, my case was
finally approved.

I decided to document
my journey via film and then host a press conference to discuss undocumented
immigration issues. My primary purpose was to visit my grandmother, but I also
wanted to see my relatives and friends. I knew the trip would be an opportunity
to think and reflect about my identity.

On the second day
of my trip, I visited the senior center where my grandmother was living. When I
finally saw her, I couldn’t help but cry. As happy as I was, I couldn’t hide my
worry. She looked so weak and fragile -- when I hugged her, I was cautious,
afraid I would hurt her.

“Halmuni!” I
exclaimed. “Do you remember me?”

“What?” my
grandmother said softly.

“Do you remember
me, Halmuni? It’s me, Ju Young! Your grandson!” I shouted, this time closer to
her ear.

I could tell my grandmother
didn’t recognize me. When I showed her a picture of us that had been taken when
I was a child, she smiled and said, “You were so little back then.” But a
moment later, she asked for my name again. She did this over and over. 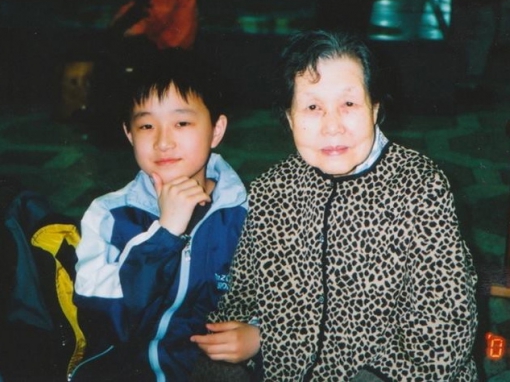 I visited my
grandmother as often as possible while I was in South Korea. I tried to be
strong in front of her, but I couldn’t help but cry again and again.

On the day I left
to return to the U.S., I visited my grandmother one last time. This time, I didn’t
cry at all. I don’t know why, but my grandmother seemed very happy and
talkative that day. When I said goodbye, I promised her that I would be back -- I promised we would see each other again very soon. I also promised that I would
bring my mom and my older sister to visit. I looked at my grandmother once
more, and then I exited the room.

It was an
overwhelming trip at times, but I felt so blessed and grateful to have the
opportunity to visit South Korea and reunite with my family for the first time
in over thirteen years.

Coming back to the
U.S. was not easy, knowing that my grandmother was ill. The truth is, I don’t
know when I’ll be able to return to South Korea. I don’t know how my mother and
my older sister will visit South Korea to see her, since they do not qualify
for DACA or Advance Parole. As much as I want to help my family, there are
certain things that I cannot control. If my mother and my sister leave, they will
most likely be barred from reentering the U.S. for ten years.

Separated from my grandmother and eager to see
her again, I feel more determined than ever to push for the rights of
immigrants. While I will continue to
advocate for a humane comprehensive immigration reform, my immediate goal is to
halt deportations and expand DACA for all 11.7 million undocumented immigrants
living in the U.S. The best way to help my family, and millions of
other families like mine, is to fix our broken immigration system.

Above all, I promised
my grandmother that I will see her again -- and I intend to keep my promise.

Ju Hong is a research assistant at Harvard University working on the National UnDACAmented Research Project (NURP), a national research study focused on the Deferred Action for Childhood Arrivals (DACA) program and its effects on the young undocumented immigrants who benefit or wish to benefit from it. Ju came to the United States from South Korea at the age of 11, and grew up in the San Francisco Bay Area. He graduated from UC Berkeley with a Bachelor's in Political Science, and is currently pursuing a Master’s Degree in Public Administration at San Francisco State University. After graduation, he hopes to continue to support, serve, and advocate for underprivileged immigrant communities. His documentary film about his return visit to South Korea is in progress. This past April, Ju was crowned Mr. Hyphen 2014.