The topaz gemstone is pleochroic; that is, it appears as different colors when viewed from various angles. Brian Komei Dempster’s debut poetry collection, Topaz, begins with his family’s imprisonment at a Japanese American internment camp and transforms their narrative into a lyrical prism that illuminates the dynamics of power – not only in the context of World War II but also in the context of everyday cruelty and injustice. It is a book not only beautiful and urgent in its uncovering of family history, but also relevant in the ways that it shines light on present-day mechanisms of discrimination and injustice.

During World War II, the US government held more than 120,000 people of Japanese ancestry in custody. Of these, more than 11,000 passed through the city of Topaz, located near Delta, Utah, the camp that also held Dempster’s infant mother and her family.

One of the most notable aspects of this collection and one of the ways in which Dempster sheds light on the dynamics of social power is by employing collage to juxtapose the speaker’s family history of internment with seemingly unrelated events in political history.

In “Transaction,” for example, Dempster weaves together the murder of Vincent Chin with an experience in a strip club and the speaker’s mother receiving a reparation check from the government. In “Graffiti,” Dempster juxtaposes references to a statement by Lieutenant General John L. Dewitt, one of the main supporters of the move to remove enemy aliens from the Western Defense Command, which eventually resulted in the internment program, with the “buck-toothed, slit-eyed” caricatures drawn of the speaker’s mother, and the homophobia of his friends into which the speaker finds himself drawn: “I hunt for the boys / Chip mocks by raising his voice / soprano – Boy George, Boytano, Burishnikoff, suck / my balls […]”

By relating the struggles for civil liberties of Japanese Americans during World War II to the acts of everyday cruelty, Dempster gives us insights into the ways in which narratives of otherness can lead to systematic oppression – whether that is by actively oppressing others or remaining silent when confronted with others’ suffering.

Wendy Ng argues that the decision to imprison people of Japanese ancestry was not a consensus within the U.S. government. People within the government and the general public made numerous arguments against the evacuation, citing the disruptive effects on California agriculture to the morale of Japanese American citizens. In fact, FBI Director J Edgar Hoover, a figure not especially known for his championing of civil rights, argued that it was more likely that Japan use Westerners rather than its overseas citizens for espionage, stating, “The necessity for mass evacuation is based primarily upon public and political pressure rather than factual data.” And yet, somehow, the movement gained momentum and on February 19, 1942, fewer than three months after the attack on Pearl Harbor, President Roosevelt signed Executive Order 9066. While the Japanese American interment remains more than 70 years in the past, Topaz reveals the ways in which similar movements toward systematic discrimination are not as far from us as we might think. A few key members might lead the movements that result in systematic discrimination – the Chips or the General Dewitts, and a few people in power like Roosevelt might sign off on them, but Dempster’s poems quietly remind readers that injustices like these implicate all of us, whether we are directly affected or not:

I added [Amber] to our chain of names which grew

during gym class between glimpses at the boys

how to mount the way we did, except the missionary,

and only with a boy, not with boys like us, how I shivered

to picture him, giving it or taking it, so convenient

to forget him, to block out my feigned belief

in Amber’s Jesus who told her to wait, and we did,

but instead I was proud to lie to you, it seemed

I did have sex each week, each score another level

on the food chain you called it, each cliché

The speaker’s frankness allows him to identify his own vulnerabilities as outsider well as the ways in which he is implicated in reinforcing hegemony of the powerful -- by lying to Chip, by pretending to score another level on the food chain, by remaining silent as the other boys bully Billy Crescent. As the poet tells the Ploughshares blog: “Through the arrangement of poems, I want the narrator, and by extension, the reader to see beyond simple binaries of good versus evil; us versus them. Each one of us has a complex identity, and only by seeing the nuances can we truly understand who we are.” By recognizing the mechanisms through which bullying or sexism or racism becomes normalized and his part in the process, however, the speaker also recognizes his position to change the status quo.

“The bold of felt-tips,

our black and blue pains the room

where Hal pulls his mop over the floor

while Chip and his teammates knead Ben-Gay

into stiff limbs, ease joints with ice and tape,

envious as they listen to how Chip is going

to take Julie doggie style in his basement,

or in the back of his father’s car, hold her face

against anything that muffles the sound,

even mine, our silence in the words I smear

with the spit on my sleeve and begin to rub out.”

Erasure is often a symbol of censorship, but throughout Topaz, Dempster transforms the practice. By erasing the graffiti on the bathroom wall, the speaker reclaims his own voice by recognizing the ways in which his silence resembles the silence of others. Throughout the book, Dempster reveals the ways in which our boundaries and edges can be spaces of convergence – in which we recognize ourselves not only in the experiences of others in our communities but across the spectrum of history. The speaker has inherited his family’s history of internment, yes, but in a way, so have we all.

The events of recent days show how close the U.S. continues to come to repeating its history and why Dempster’s book is more urgent now than ever. Last month, in response to settling refugees, the Democratic Mayor of Roanoke David Bowers issued a statement that used Japanese internment as a basis for stopping Syrian refugees from settling in the U.S., in which he said, “I’m reminded that President Franklin D. Roosevelt felt compelled to sequester Japanese foreign nationals after the bombing of Pearl Harbor, and it appears that the threat of harm to America from ISIS now is just as real and serious as that from our enemies then.” Later in the week, he apologized for his remarks (which cost him his position of Hillary Clinton’s Virginia Leadership Council), but said that he stands by his original concerns.

By living in community -- whether that is a nation-state, family, culture or city – we are drawn into relationship with others, some of which we choose, some of which we do not. Sometimes those relationships reinforce systematic discrimination and violence. Sometimes they allow us to reclaim what has been lost to our ancestors and the opportunity not to repeat the mistakes of the past. As Dempster writes in “Crossing”:

“[…] Maybe Topaz in the desert was long

gone, but it lingered in letters, photos, fragments

of stories. My mother’s room now mine, the bed pulled blank

with ironed sheets, a desk set with pen and paper. Here

I would come to understand.”

Topaz is often thought to be blue; however, it exists in an array of colors, all caused by imperfections in the crystal structure of the individual stones, rather than in their chemical composition. Chromium makes topaz pink, red, or violet-purple, for example. Perhaps one way we can approach those events buried in historical silence and the experiences of those even now being silenced is in the way that Dempster moves through this book: by reflecting them and refracting them through our individual experiences and that which we know. “I am the prism / refracting / your prison,” he writes in the book’s titular poem. “Through facets / I etch memory.” As we cast light on one story, we illuminate another, and we locate glimmers of our experiences in those of others. Topaz is a light that, in the wake of recent events, is as vital now as it was sixty years ago, as all of us etch today what will become our history tomorrow.

Leah Silvieus is a poet and writer based outside of Washington D.C. She holds an MFA from the University of Miami and has a chapbook, Anemochory, forthcoming from Hyacinth Girl Press in 2016. 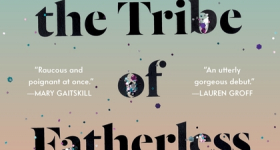