C. Dale Young’s fourth and latest book of poetry gives everything away in its title. The Halo ruminates upon religion and faith, divinity and mysticism, purity and perversion. Yet, as one of his poems states, “things beg for significance.” The obvious is never so obvious. As humans we are compelled to always see more, to always want to see more.

Thematically, the poems delve seamlessly in and out of Christianity, Greek and Roman myths, Western philosophy and art, fairy tales, folklore, comic books and Bruce Lee films. An angel confronts a werewolf, another angel impregnates a virgin, a woman transforms into a tree, a paralyzed man learns how to walk again. “…[A]ll stories / of origin are lies that beget more lies,” and this is what constitutes our collective history. We are who we are because we imagine it to be so. The collection’s strength lies in its conviction that fictions are powerful precisely because they are untrue.

In the center of it all is the narrator, who is remembering his recovery from a massive car accident. He frequently refers to his head brace, or halo brace, that is keeping his spine in line. His halo forces him into immobility, so that he may walk again. This contradiction, between immobility and emancipation, sustains much of the text as it ponders what it means to transform, to heal, to -- quite literally -- spread one’s wings.

While the narrator contemplates from his hospital bed the numerous winged-creatures --biblical (angel), mythical (Cupid), avian (hawk), superhero (Hawkman) -- that exist in Western art and culture, we learn that he suffers from another ailment: a pair of wings that sporadically sprout from between his shoulder blades. These are not the wings that Jacob possesses in Leon Bonnat’s “Jacob Wrestling the Angel,” the ones the narrator regards as too perfect, as if drawn from a swan. No, his wings rip from his shoulder blades. They become raggedy and grey before they fall out, only to reemerge.

It is hard not to relate Young’s angel wings to Gabriel Garcia-Marquez’s magical realist ones. Despite the ways in which the genre has been exploited, often resulting in the sensationalization of Latin American culture, magical realism has historically been committed to uncovering the marvelousness of everyday, ordinary life. Latin American novelists turned to magical realism as a means of confronting and critiquing Western Enlightenment’s obsession with reason and science, the values upon which the conquest and colonization of the Americas were enacted.

Though The Halo does not quite read as a politically motivated magical realist text, nonetheless there exist similar themes of questioning science, and regarding the everyday as miraculous. In “What Is Revealed,” the narrator observes:

Much of this world remains hidden, and
all the science in the world cannot illuminate
every dark corner, much less the corners of the mind.

In particular, the image of the halo evokes at once a tangible, scientific materiality and that which exists outside of these parameters, including the recesses of human memory. Halos radiate from the auras of angels and blessed humans in Western art. Yet, halos are what have been drawn in by artists to define these creatures as such. The presence of the halo is how “mere mortals [are] made divine.” They are symbols that identify the blessed, for the blessed are naked to the human eye. As such, halos signify both divinity but also human intent and intervention. In Young’s collection, the two dominant motifs of the halo, the medical one that literally embraces him and the image of the narrator as a mortal angel, sustain this tension.

Photo of the poet by William Anthony

In “Annunciation,” referring to the angel Gabriel’s revelation to Mary that she would give birth to Jesus, the narrator’s “terrible wings” are tied to puberty. When they first appear, he is shaving and his voice is deepening. He is 14. There is pain and bleeding, providing for a materialistic and profane rendering of being blessed. Or perhaps it is a sign of the marked. One wonders what thoughts may have crossed Mary’s mind upon hearing of her pending virgin pregnancy.

In “The Prodigal,” the narrator remembers his horrible accident and being

18 and worried. I was always worried, this thing
inside me growing, this 'unnatural' urge to take
a man's face in my hands and kiss his mouth
almost violently. And maybe the gods knew this.

The car accident that temporarily paralyzes him cannot be disentangled from his burgeoning sexuality over which he has little choice or control. He remembers waking up in the hospital, seeing the halo screwed into his skull, “something monstrous and beautiful.” A sense of guilt haunts his sense of queer sexuality, which is linked to his bodily paralysis. At the same time, the poems suggest whether queer sexuality is any different from non-queer sexualities that also are structured by unexpected urges, guilty desires, and fantastically transforming bodies.

What does it mean, the narrator asks, to be blessed? Is surviving a devastating car crash a blessing or a curse? A random accident or a sign? Is coming out queer an act of liberation or oppression? Are his wings that sprout, then shed, then sprout again a sign of divinity or punishment? A mere physical mutation or a deep, personal secret? A symbol of liberation or a mark of abjection? After all, “[w]hat good are wings if you cannot fly?”

The pieces written from the point of view of the narrator lying in a hospital bed references careful medical terminology which, juxtaposed against the religious and spiritual symbol of the halo, takes on a philosophical glow. Phrases and words such as “second cervical vertebra,” “acetabulum,” and “calvarium” stand out as both exacting yet enigmatic, furtive human attempts to justify our biology to ourselves. Within this intricate physiological map, one wonders where human memories, desires, and regrets may lie.

The entire collection is obsessed with precision, or perhaps more accurately, human inability to be precise. Despite the vast cultural archives from which Young draws, the book never once wavers from precise five-line stanzas. He adheres to his own lines, that poems are “…those / intricate machines of delicacy and controlled measures.” Poetry is both mechanical and imaginative, intentional and uncontrollable. Like the halo forcing the narrator’s body into wholeness, the book itself is adamant in its adherence to this stanza, a long-line variation (or perhaps mutation?) of a cinquain. Yet, also like the narrator’s mind that wanders while his body is forced into place, the poems differ in length, some satisfying an entire page of five stanzas of five lines (a variation of a crown cinquain), while others fail to fill the page, or are forced to continue onto the next page, one or two stanzas dangling in space.

In the end, The Halo is about memory. The narrator is remembering his own accident, as well as recollecting a shared, cultural past. The spatial layout of the poems evokes the structure of our personal and collective memories. Whether they seem to make perfect sense or whether they are flawed, we are always suspicious of our memories. We always demand more. And this is what makes the collection a story “not [of] a man made divine but more human.”

Hee-Jung Serenity Joo is a professor of American literature in Winnipeg, Canada. She spends a lot of time thinking about racial identities in unexpected places (alien worlds, Korean partition, North Dakota). Her favorite holiday is Mardi Gras, because it combines her obsession with shiny things with her love of free things. 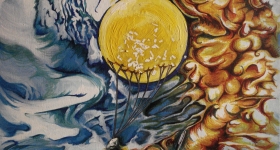 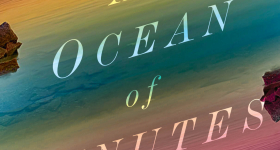