"Bird of the Indian Subcontinent" and "A Fine Romance"
Subhashini Kaligotla
April 17, 2017

This April, we present two poems from Subhashini Kaligotla's forthcoming debut collection of poetry that blur the boundary between bird and man through delightful anthropomorphisms. These poems honor the mystery of the creature, be it man or bird, by reserving judgment through a steady, journalistic tone and by inviting us to admire the “elusive” one—“a still / from a silent-era film: // hyperbole of arch / glowering / at gulls.”

Bird of the Indian Subcontinent

in monotonous brown,
dusty green. Domestic animal,
he makes his appearance in company:

a femme, sometimes a bevy follow,
also colorful, but less so. Unlike
swan or albatross, he’s rarely seen

with the same one, though he’s been known
for his bouts with monogamy. Restless,
prone to boredom, addicted to stimulants,

he rebuilds his nest often, discarding
habitats like females. Now his song,
ah his song, the colorful songster

is eloquent. Though birdmen are uncertain
about the time of day he sings
or what makes him stop

Elusive as ever
he flees to the terrace.

Lighting up
he’s a still
from a silent-era film:

hyperbole of arch
glowering
at gulls and the navy ships
in the corrugated bay. 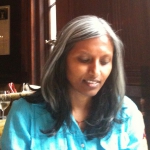 Subhashini Kaligotla’s first poetry collection won the (Great) Indian Poetry Collective’s 2016 Emerging Poets Prize and is forthcoming in Fall 2017.  She is an architectural historian of medieval India and lives and writes in Berlin. 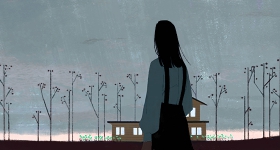 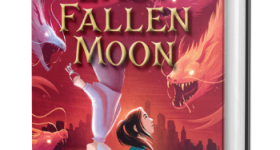 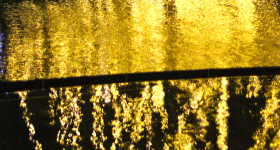