Jackie Chan, perennial action star and cultural ambassador for both Asia and martial arts, submitted his resume into the genre of grieving-older-man-seeking-vengeance with the opening of The Foreigner, a Martin Cambell-directed, Pierce Brosnan co-starred film this past month. Chan, who since the 2000s has slowly drifted away from the action-comedy films that have all but defined his career, will likely take American audiences by surprise with his latest role. Back in China, audiences will find his latest film as a continuation of his deliberate foray into drama first paved with films New Police Story (2004), Rob-B-Hood (2006), and The Shinjuku Incident (2009).

The mostly Chinese-financed film, which has already grossed over $100 million worldwide, has been likened to Liam Neeson’s Taken (2008), except with Jackie Chan — 63-year-old Chan, not acrobatic Police Story (1985) Chan — assuming the role of the grieving, lethal father Quan Ngoc Minh. The comparison stands on the virtues of plot and setting — violent political espionage in the backdrop of a grim, xenophobic present-day Europe — but differs mainly on the perception of the titular character, the foreigner himself, Quan.

The film wisely does away with the problematic connotations of the novel’s original title (The Chinaman), but keeps a wary focus on Quan’s race — well, at least when he’s on screen — which, honestly, isn’t a lot. Pair this with a marketing campaign prominently featuring Chan with a pistol in hand overlooking fiery, anonymous European destruction, the truth of the film finds the actor grieving more than gunning. The Foreigner wastes no time setting up Quan’s tragedy, with his daughter being killed by an IRA bomb within minutes of the opening. And, as such, Chan’s character operates in a solemn one-note fashion, sternly affixed on justice with zero interest or intrigue apart from finding the bombers. And while this omission of Jackie’s trademark humor and charm might result in a sobering viewing experience, it plays directly into the hand of his co-star, fellow aging action star Pierce Brosnan. Both actors play against type, with Chan relinquishing his affable sensibilities and Brosnan playing a cagey, flustered diplomat, a far cry from the suave secret agent that made him famous.

That isn’t to say Brosnan’s character isn’t interesting; in fact, he’s one of the few fully-realized characters in the film and truly essential to the plot, even if that isn’t inherent within the film’s marketing. This was likely done out of concession of the filmmakers to build up Jackie’s spectacular set pieces, which showcase him doing things no 63-year-old should be doing.

But Jackie Chan is no ordinary 63-year-old. And at the twilight of his career, this curious detour of a project stands out among the litany of late-career Chinese crime dramas simply on the basis that when fighting other Asian characters — as he’s done in the Police Story franchise or The Shinjuki Incident — race, his race, is inconsequential to the plot. But in the case of The Foreigner, it’s the first thing other characters see and just about the only thing that they seem to talk about.

When Quan is on screen, his treatment by other characters on both sides of the law is ambivalent. In his attempts to obtain information about the bombing, the London commissioner asks him if he is a citizen, to which Quan responds matter-of-factly that he immigrated to London in 1984 and is a British citizen. It’s a brief moment within an even briefer exchange, but the micro-aggression — all too commonly experienced by people of color living in any Western country —feels astutely current. Several characters, including dignified government officials, scorn Quan as an “old Asian man with a grudge” and, at the most debased, a “fuckin’ Chinaman.”

And while this perfunctory lack of political correctness feels woefully out of place in 2017, it’s also important to consider the world of the source material: The Chinaman, a Stephen Leather novel written in 1992, a time when the IRA existed but political correctness did not. One quick excerpt from the novel’s original tagline all but informs the kind of universe and character Chan was given to work with:

Jungle-skilled, silent and lethal, he had killed for the Viet Cong and then for the Americans. Quiet, hard-working and unassuming, he was building up his South London take-away business.
Until the day his wife and youngest daughter were destroyed by an IRA bomb in a Knightsbridge department store. Then, simply but persistently, he began to ask the authorities who were the men responsible, what was being done. And was turned away, fobbed off, treated as a nuisance. Which was when the Chinaman, denied justice, decided on revenge. And went back to war…

Remember, that tagline was written to promote the book in 1992, so any glaring oversimplifications on race should be taken with a grain of salt. That being said, it would be remiss to overlook how Asian culture — in this case, a “jungle-skilled” assassin — is sensationalized to pulpy aplomb. And while this particular realm of crime thriller novels that capitalize on a larger public’s lack of understanding of Asian culture behooves criticism (and justly so), the decision to adapt a source material, problematic trappings in all, also results in a truth brought to life through film: Terrorists can be white, homegrown, and extremely dangerous.

More likely than not, the filmmakers had no intention to make a political statement through this depiction, which lends itself to the subjectivity of the film. As such, Chan, whose expressive face only rivals the vividness of his movements, is instructed to paint his canvas with one color: grey. Verily, this is a thoroughly joyless affair: Fans looking for slapstick or a smile will be left disappointed — although there is a cathartic feeling watching an Asian character in Chan exact justice and dish out punches in a foreign country, where the reverse has been glorified and exploited in ostensibly any action flick since the 1980s. This nifty flip of traditional white-on-Asian violence, in all of its brutish candor, feels like a small victory. 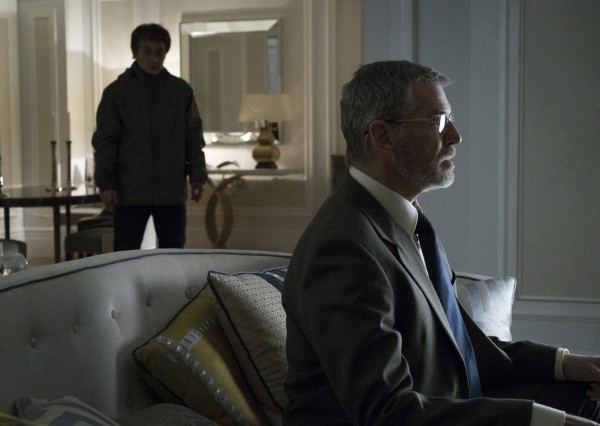 Jackie Chan’s return to the big screen may be overshadowed by holiday festivities, but the impact of his portrayal as a genuine, feeling, grieving Asian father is a noteworthy addition to a storied career, one constructed on being an undisputed underdog. In any Jackie Chan movie, you will find him operating at a disadvantage, whether it be fighting uphill, outnumbered, or simply against time. The chips stacked against him are very apparent in The Foreigner as the grieving father fights IRA thugs half or even a third his age. And while Chan has fractured nearly every bone in his body in his storied 40-year career, his spirit, like his signature smile, remains unbroken.