"A Week After the Funeral" and "Waiting for the Bus"
Nghiem Tran
September 4, 2018

Nghiem Tran’s poems examine two seemingly ordinary situations — a drive that takes a turn, a wayward bus — with beautiful precision until each disclosed detail and action rings of palpable loss and grief. Both poems transcend the mundane and draw us into the painful and resonant realities of these characters until we come to believe we know and love this family.

A Week After the Funeral

that led out of town
and into a 200-mile stretch

of rolling hills. I watched us pass
a pasture of cows, a stable

of horses, and a lone farmhouse
in the middle of cornfields. Where

are we going? I asked.
She said she wanted to make

she’d picked from her garden.
I stared at her. Then at the speedometer

but couldn’t finish. I know,
said my mother. Then she turned on the headlights

so she could see
where she was going.

Waiting for the Bus

Back then we could only afford one car:
a two-seat Honda Civic, blue paint
chipping off the doors. My father used it
for work, leaving my mother
to take the bus. The night before
her first day at Lucky Asian Market,
we unfolded a hand-held map
across their bed. Two red circles:

Our house and the market. In between,
Sharpie lines connected the streets.
My father said, Take the W20, not the W32.
I was lying beside my mother’s lap,
and I fell asleep to the sound of the pencil
scratching directions into her mind.

I wasn’t worried about her,
assumed she would make it through the day
without any issue. I had more serious concerns
like making sure my finicky hands
didn’t drop the football in P.E.

That morning, however, a bus arrived
that was not the W20 or the W32.
And it took her to the west side of town,
where none of the trees looked familiar.
Every time the bus stopped, it let out
a groan, as if too old and tired
to pick up its metal bones and finish
the shift.

To the best of her memory,
she walked back to the initial bus stop,
then sat under the awning, eating her lunch.
The bread of the ham sandwich
scraping against her tongue like asphalt,
she swallowed that flavorless mush
until it was time to go home. 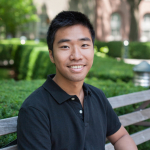 Nghiem Tran was born in Vietnam and raised in Kansas. His work can be seen in the Indiana Review, the Offing, the Adroit Journal, Tinderbox Poetry and elsewhere. He is a Kundiman Fellow and an MFA candidate at Syracuse University.