For most of my life, the kitchen has been a foreboding space. Vivid feelings of inadequacy, frustration and fear weighed heavy in the air, ironically juxtaposed with the homey scents of my mom’s bánh bông lan or bún riêu. The kitchen was my mom’s kingdom where she reigned with uninterrupted rhythm, and I neither felt invited nor did I know how to make space for myself there. Even when she commissioned me for help, she was always quick to remind me that I was too slow, getting in her way and asking too many questions. The anxiety and pressure I built for myself over the years around cooking Vietnamese food overshadowed my desire to learn how to cook it.

However, when I moved to Vietnam, I found quickly that even though I wasn’t fluent in the Vietnamese language, I was fluent in Vietnamese food. I gave thanks to my mom on every street corner, since it was she who allowed me to access and appreciate bowls of steaming mì and plates of smoky cơm sườn as portals that traveled across time and cultural contexts linking identity, home and family. These portals inspired me to ask difficult questions I never thought I could ask. Questions like, “What tropical fruit do you miss the most?” became mixed with “Why did Grandpa die in Vietnam?” All of the honest answers I received made me realize it’s not that my family didn’t want to teach me about my culture and histories — I just wasn’t open to learning about them until now.

I approached cooking Vietnamese food with the same mentality. Here I was, holding resentment over my mother about how she never welcomed me into the kitchen when I didn’t try harder to be present with her. I pushed my anxiety about cooking Viet food aside when I moved to Thailand the next year. Determined, though hesitant, I nudged the topic by hinting, “Ohhh Mom I just miss chè trôi nước so much,” to which, she would always respond without fail, “Dễ làm lắm, Châu.”// “It’s so easy to make, Chau.” Pleased she fell into my trap, I’d respond with mock surprise, “Oh! Really? How do you make it?”

Eagerly waiting for the photo of my mom’s recipe book full of her curly handwriting, I’d open my phone at the end of the day and instead find a link to a YouTube video of a Vietnamese American auntie making chè trôi nước. Confused as to why she sent me a YouTube video and not her own recipe, I just shrugged it off. Maybe she didn’t understand what I was asking her for.

Some time later, I asked for her bánh bao recipe and held my breath as I waited for her response. Similarly, she messaged, “If you don’t know, just go on YouTube and watch. Search Xuân Hồng and Uyên Thy. These two aunties are in the United States and everyone follows their recipes.” I sighed and tried one last time, “And your bánh bao recipe?”

My annoyance and exasperation crept up as I whined, “Ugh, Mommy, you don’t understand! I want your recipe!”

I tried to reason with my mom, insisting that I was most familiar with her recipe, and I’ve been telling people how good it is. I didn’t want to learn it from some random auntie! She didn’t budge.

Several weeks later, I eventually asked my mom if my Grandma taught her how to cook bánh bao, and she scoffed, “Grandma doesn’t know how to make bánh bao! I had to learn it all myself. Every time I made it, I would change the recipe until I thought it was good enough. It took a long time and many tries.” When she said this, I recalled my mom at the kitchen table, watching cooking videos in Vietnamese from her phone and taking notes on napkins while my brother and I ate dinner.

My stubborn refusal to learn how to cook Viet food from anyone else but my family trapped me from engaging with what it means to come from a lineage of immigrants and refugees. I conjured this fantasy that my mom learned how to cook from her mom, who learned how to cook from her mom, without realizing the ways that displacement and migration fragment such a straightforward narrative. Many of the recipes I thought were iconic to my mother, I realized, were actually a result of her learning through Viet American aunties posting YouTube cooking videos or though her own trial and error, rather than from a recipe passed across generations.

In a sociopolitical climate where people are forced to create homes far from their ancestral lands, YouTube functions as a tool to share cultural knowledge, such as food, in accessible ways with each other, for each other. For the Vietnamese diaspora, not only is it used to teach each other about how to best mimic Vietnamese flavors with what they have in their current context, it also allows room for recipe play and adaptation. The romance of “authentic” learning and “authentic” cooking as a second-gen kid blocked me off from my peoples’ history of knowledge sharing through different means and settings.

I decided it was time I move forward and challenge myself with cooking Viet food. If my mom’s not here to do it, Cô Xuân Hồng would be. I found that Xuân Hồng’s bánh mì xíu mại recipe, or Vietnamese meatballs, was one of her most watched videos, and I set out to make it.

As I began grocery shopping, I immediately started practicing the soul of Asian American cooking: crafty improvisation. In a strange reversal of events, because I was cooking in Southeast Asia, I didn’t have easy access to many of the ingredients that Xuân Hồng was using in the United States. Things like chicken powder, tomato paste and shrimp were expensive or harder to find. Thailand and Vietnam have different foodscapes in themselves — jicama and the iconic Vietnamese baguette/bánh mì were nowhere to be found. Well, I thought, we’ll see what happens.

When I pressed play, digital flames erupted across the screen and rock music transitioned to introduce Auntie Xuân Hồng, who was very casually in the kitchen wearing dangly chandelier earrings, heavy makeup and carefully curled hair. In Vietnamese, she opened her video stressing how cooking with love and self-confidence were the crucial ingredients to making delicious, home-cooked xíu mại. From using chicken broth instead of water, or pan-frying the meatballs instead of steaming them, she noted how the dish was generally made in Vietnam, and how she was altering it. At the same time, Xuân Hồng cooked with an intuition that spanned a lifetime of eating and building histories with Viet food; histories, she reminds me, that we all have access to while cooking. While thinning out the tomato sauce, she asks, “A sauce that is too thick isn’t really delicious, right? Xíu mại is only good with an even or thinner sauce,” encouraging her diasporic audience to reflect on how they enjoyed xíu mại growing up. With flair and sentiment, Xuân Hồng appealed to a certain nostalgia that spoke to what the Viet Kieu (diasporic Vietnamese) community knows this dish to be, while also broadening those expectations by incorporating American elements.

Learning how to cook from Xuân Hồng’s video meant stopping and rewinding the video several times because she was talking too fast or using words I didn’t know because of my limited Vietnamese. If Xuân Hồng was my digital cooking mom, then Google Translate was my dad, as I guessed the spelling of words and hoped for the best. Eventually, however, I understood that more important than translating her words was hearing the heart of her storytelling. While pulling apart bánh mì, Cô Xuân Hồng reminisced, “When I was young and lived with my mom and dad, they would ask me what I wanted to eat in the morning. I’d always reply, ‘Bánh mì xíu mại,’ and Mom would buy it for me or give me money in the morning to buy it. For some reason I’m making this and missing Mom so much.” 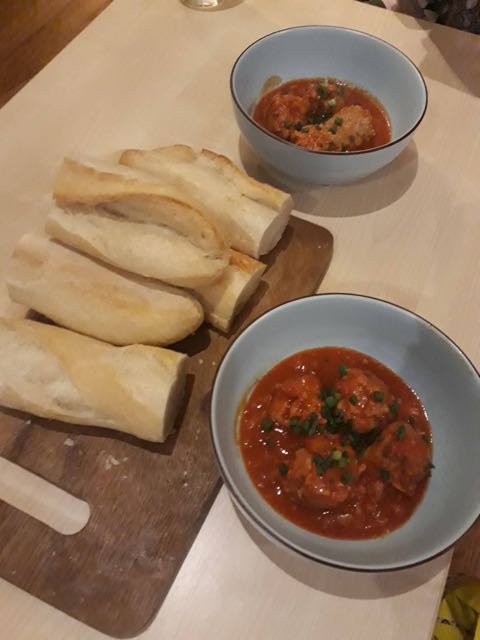 When I finally sat down to try my xíu mại, I knew what she meant. I tasted memories of my mom’s voice calling out to my brother and me from upstairs, “Châu! Hưng! Ăn bánh mì chấm chấm!” or “Come eat dipping bread!”, the code word for my brother and I to line the kitchen table with newspaper that would soon be covered in bánh mì flakes scattered like confetti.

Predictably, I also ended up reaching out to my mom for help. Googling photos of ingredients could only go so far when my Vietnamese spelling was wrong or I just didn’t know what it was. She indulged my first few questions, and then when it came to my questions about different types of spring onions, I could feel her mild annoyance bubble through the screen as she messaged me, “You search on Google.” I laughed, “Mom, if I could have Googled it, I would have Googled it already!” Even with generations of diaspora relying on the internet to teach them about their own culture, there are nuances, as Xuân Hồng points out through her intuitive cooking, that can only be learned through your roots.

Nervous, I finally mustered up the courage to send my mom a photo of the dish, to which she responded with a single thumbs up emoji. After spending several hours cooking, Googling and watching the video over and over again, I couldn’t help but roll my eyes and laugh at the simple, yet gratifying, affirmation. Who could have guessed that cooking as Vietnamese American could consist of juggling YouTube, Google Translate and Facebook emojis?

Macy-Châu Diễm Trần is a Vietnamese American dreamer, food lover and proud Midwest Asian. Her roots begin at Pho 79 Restaurant in Minneapolis, Minnesota, which her family opened in the ’80s and continues to operate. She has also been blessed to grow her roots in Wisconsin, Vietnam and now Bangkok, Thailand, where she is currently working at Courageous Kitchen, an organization that supports urban refugee youth through food and language education, mentorship and food security. 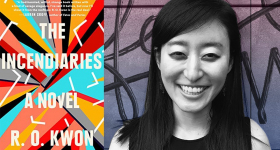