This story begins when my grandfather comes home to Guangzhou to find his brother waiting. It’s 1949, at the climax of the Chinese Civil War, and the Nationalists have just lost their governing hold to the Communists. My grandfather, however, does not care for all that — at least that’s how the story goes, anyway. But as he approaches home, he notices something different since the last time he had seen it, not more than a week ago. He just returned from an extravagant work trip to Hong Kong with his colleagues. He stayed at one of the finest hotels called The Peninsula. After all, he is a high-ranking executive at the one and only telegram company in Guangzhou. That week in Hong Kong, he wore dashing white suits with a matching white fedora, drank top-shelf liquor, played his best hands at mahjong and danced in raucous, smoke-filled rooms. I imagine his life to be like one of Gatsby’s parties, but that would not be the truth. More importantly, it would not be how the story goes. It goes like this:

A friend once said to me, "Longing feels like hunger." I never quite understood it until I started looking backwards in time, tracing all the cracks of my family to this place in our shared history. As I listen to this story of my grandfather coming home over and over again, I realize I’m hungry not only for food, but for shelter, for safety, for something — for anything — that could feel like home again. And the root of my hunger and my longing starts here with my grandfather approaching his home to find his brother waiting.

I’ve never met my grandfather’s brother. He was probably tall, like my grandfather, and perhaps commanded a presence in any room like my grandfather. Or maybe he didn’t. I know he had a family, and I know he loved them as best he thought he could. Because even though he was a high-ranking Communist official — the secretary to Zhou Enlai — and my grandfather had nothing to do with them, he waited for my grandfather to come home before telling him to run for his life.

My grandfather flees, with five other friends, across now Communist-occupied China. They hide among the shadows through different villages, rely on my grandfather’s quick wit and ability to speak multiple dialects and run faster than the blood pooling in the streets. At one point, when they’re in the mountains, they put together all the money they had left to buy a pig — at my grandfather’s request. But when they finally cook this pig, my grandfather refuses to eat it, complaining that it’s too fatty and tastes like mao mao chong (a caterpillar) in his mouth.

Usually, my family laughs and teases my grandfather at this part of the story: You’re a starving refugee with the People’s Liberation Army right behind you, yet you’re still so picky about your food?

And throughout the years of hearing this story, I would also laugh along, especially because red roasted pork became one of my favorite foods. When I visited Taiwan, my grandfather would wake up at 5 every single morning to go to the market to buy this for me, so I could eat it every day for the duration of my stay. Sometimes, I would pretend to offer some to my grandfather who would turn his nose up at it and shake his head. We would both laugh.

With my family, I was never found wanting nor did I ever go hungry. Food always came from a place of love, comfort and home. And I know my grandfather felt this, too, because no matter the time of day, he would always ask, "Ni chi le ma?" (Have you eaten?) and after every meal he would also ask, "Chi bao le ma?" (Are you full?) And perhaps this is why I never thought too long for anything more. He made sure that I was always full.

Time slows down in the midst of longing, and memories repeat themselves. I always come back to this roasted pig. This is where I find the first ache of our collective hunger, my grandfather and I. At this point, he is a starving and exhausted refugee, clinging on to the little life he had left. And yet, he refuses to eat. I can see it happening, as if it’s my own memory. I watch him stare out to nothing in those mountains, as his friends happily enjoy what could have been their last meal. I can feel how he longs for home and for his family, and how no amount of food could fill that void again. And I see the ghost of him appear throughout time, where this hunger and trauma ate its way through my family, a generation later as we struggled to maintain a life in America.

I see my grandfather the most through all the times my parents struggled to get by, but still always managed to feed my brother and me. I see him on all the Mondays of my childhood. At the beginning of each week, my mom dutifully flipped through grocery store catalogs with a pen in hand, circling all 2-for-1!s and Only $1.99!s of the week. And every week, I accompanied her to buy only those circled items at the store. Throughout elementary school, my lunch consisted of frozen 12 for only $2! burritos microwaved the same morning and a single Capri Sun. I unpacked the best my parents could do while my classmates unpacked their lunches filled with snacks, Lunchables, sandwiches and notes on napkins.

My parents’ best was not enough against the California housing crisis. My family lost our home as abruptly as my grandfather lost his, and like him, we never recovered from the blow. I was a junior in college in New York when my diaries, books and childhood dreams were swiftly packed into boxes and never seen again. My heart discovered the true meaning of longing, then. And this is when hunger begins to gnaw at my entire being.

After losing the only home I ever knew, I decided it was also the perfect time to become a vegetarian. The sight of pork and all its oozing, fatty layers also began to disgust me in the same way it disgusted my grandfather in those mountains. When I finally saw my mom that same winter break we lost our home, waiting for me at the airport in Taipei, she hugged me tightly and said, "You’re so skinny." This was a good thing, I thought, because I wanted to disappear and no longer bear the weight of missing a home.

I attempted to heal from the loss of our home in California and build one of my own in New York City. I was no longer a vegetarian, but I found myself haunted by constant food anxiety. At my very first 9-to-5 job out of college, my colleagues frequently went on juice cleanses, starving themselves for a week at a time and only eating a cup of salad for lunch. Once, in the break room, a colleague side-eyed the quesadilla I had bought for lunch with all its cheesy, fatty goodness. That’s so much food, she said, as if the sight of it offended her. For the duration of my time at this job and all the soul-crushing jobs following it, I began counting calories as if my life depended on it, exercising more than my body could bear and drinking a bottle of wine every night on my own.

I worked hard and gave it my best to ensure financial stability — but like my parents’ story, my grandfather’s story, my best was not enough to combat the immensity of longing. At one of my last office jobs, where protein shakes were considered a perk, I hid in a bookstore cafe overlooking Bryant Park for lunch and cried almost every day. Through my exhaustion and inevitable burnout, all I could think about was probably what my grandfather thought: I want to go home.

By 1950, my grandfather and his friends flee all the way to Vietnam, where French colonizers capture them and send them to labor camps. He is so malnourished that he almost loses his vision completely. But, my grandfather uses the last of his strength and sight to write to a former colleague in Taiwan, begging him to save them. He slips the letter and the remainder of his money to a passing merchant.

This letter lands at the hands of an influential businessman working at a telegram company in Taiwan. In what seems like a lifetime ago, my grandfather and him were equals in status and wealth, both businessmen working at a telegram company. With his help, my grandfather and his friends are released and sent back to Hong Kong. He stands in front of The Peninsula hotel, where his life was once extravagant. But instead of going back home to Guangzhou, he boards a plane to Taiwan, where he starts a new home and family.

But like the moment with the pig, there is another that repeats in our family’s shared memory and trauma — one that I hope for in the future and meets the end of my own longing. A moment that ended my grandfather’s hunger and one that could end mine, too.  It’s 1987, and the travel ban between Taiwan and China is lifted. My grandfather goes back to Guangzhou. He walks down the same street and approaches the same home as he did all those years ago. And he finds his brother, once again, waiting.

Sandie Cheng is a writer, producer, and actor from Riverside, CA. She currently produces and hosts the podcast, Now In Color, and is in the midst of producing a TV pilot slated for production in the fall of 2019. Her writing has appeared in Cosmonauts Avenue, PopSugar, and Bustle. She currently lives in Brooklyn, NY with her cat Hygge and partner. 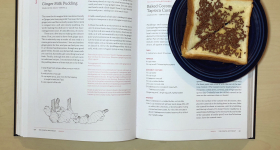