As a second generation Asian American, I was immediately drawn to the epistolary form of Victoria Chang's stunning new collection, Dear Memory. Chang’s letters speak often across generations — both into the past of her family’s immigrant history and into the future of what she wishes for her daughters. Interspersed with the letters are images of photos and documents — often related to her parents and grandparents — that she interrupts with cutouts and pieces of handwritten text. Chang artfully examines how grief, memory and silence shape the children of immigrants, including letters to parents, grandparents, her children, friends and former teachers. Ultimately, Dear Memory combines epistolary text with image to question what it means to truly belong somewhere, crafting what I came to view as a counter-assimilation poetic narrative.

Dear Memory begins with a question — or rather, it begins with a multitude of questions. The collection begins with the speaker grappling with her mother’s death and the silence of her mother’s life. Throughout the collection, she goes on to speak about her father’s severe memory loss. These concrete events run parallel to the more abstract themes of the book: thoughts on the loss and rupture of one’s family history due to immigration and an increasing awareness of a pervasiveness of assimilation-based thinking. The speaker suggests that “assimilation … is an endless pursuit.” She describes her experience with “overeducating herself” in order to “belong” in American society and her father’s perfect attendance records at Ford Motor Company, both infinitely ceaseless ideals. Chang also grapples with what it means to be a writer when one is cut off from one’s own intergenerational past, as many children of immigrants are. She includes a series of essays speaking to various teachers, all of which are addressed simply to “Dear Teacher” and track her experience of working through her identity as a writer.

Chang’s first letter addressed to her daughters appears about midway through the book. She writes about her experiences feeling out of sync with what it means to be an American. From here, she speaks about being tethered to family members who came before — family members who, for children and even grandchildren of immigrants, are so often obscured:

The image of obscuring someone while also seeing through their eyes felt particularly haunting. Here, Chang makes concrete the duality of visibility and invisibility that takes place across generations. Modes of understanding and interacting with the world are passed down but, through that passing down, the experiences of one’s predecessors become shadowed and beyond reach. Particularly in the context of immigration, one continues to see through the lens of history’s effects while also losing access to that history. The inclusion of the word “unwanted” in the line, “you will have a camera around your neck, unwanted,”  speaks to the aftereffects of immigration across generations. Though the actual history is still wanted by the wearer, the “camera,” or burdens of rupture caused by immigration, is itself unwanted. This is due to its origin: It has been placed there through the trappings of assimilation that require obedience in order to try to “belong” in a place that has marked one as other.

Chang also complicates the idea of silence through her inclusion of listening. Listening does not completely reject one’s condition but works actively within the circumstances; this goes against the connotation of complacence that’s often implicit in the idea of not speaking. The final letter in the collection is written to address the reader. Chang explains how she uses the epistolary form as a way of speaking toward spaces that are otherwise inaccessible, such as death, memory loss and fractured histories. In this letter, the speaker suggests that perhaps “silence is not something to interact with, to be filled in, but rather to let wash over you, to exist within. Maybe silence is its own form of language.” She posits silence as a kind of liberation, of openness. In this way of thinking, which is itself another kind of question, silence is not passive but an active resistance to the traumatic nature of both memory and assimilation.

Over the course of the collection, the speaker lands upon the idea of simultaneity rather than diametric opposition: Immigrants inhabit a duality of visibility and invisibility. Silence — or emptiness — is at once an act of complacency and an act of rebellion. When thinking about her father’s assimilatory experiences, the speaker suggests that “maybe emptying out is a beautiful thing. The space between raindrops. The space where I live.” Rather than fighting against emptiness, the speaker suggests embracing the openness it holds is another kind of possibility. Granting oneself vacant space is another mode of resistance against the overcrowded mold of an assimilatory life. The experience of both immigrants and the children of immigrants is one of liminality; one is both at home and untethered continuously. It seems only natural that the expression of this experience would lend itself to a space beyond binary definitions, beyond quantifiability. For the children of immigrants, there is a fuzziness surrounding so much of their family’s history. The speaker wishes to “fly perfectly above [her] history like geese. ... But all the people have no faces.” Ultimately, Chang’s collection grapples with how to understand the nuances of this emptiness of memory, this lack of history — an emptiness that is both a violent erasure and a protective shield.

Chang’s multimedia approach pushes this idea even further. In the images included, words are often overlaid or integrated within the images themselves. There are also images in which the words grow to obscure the subjects of the images. On page 89, Chang includes a visual composed of four repeated images of a face. The page is simply titled “Mother.” Over each face is the cutout of a piece of paper covered in words, obscuring the subject of the photograph. The words themselves tell of the mother’s experience immigrating from China to the United States, and the corner of the repetition includes part of a stamp in Chinese characters. This visual is at the crux of Chang’s argument: The mother’s face, her identity, is obscured by the immigration narrative which becomes her new identity. She is no longer a specific woman with a face but a faceless woman known only by a more generalized experience. She is both hypervisible and anonymous, projected and eradicated.

It’s easy to conceptualize the world through a binary lens: assimilation or anti-assimilation. Chang’s beautiful collection complicates this, recognizing that one cannot truly escape the systems and violence faced through the process of immigration. The collection of letters arrives at the question of how to reconcile these simultaneous realities. As the speaker describes an experience of watching a video of her daughter running, she imagines a hummingbird “resting on a branch, escaping itself and its history for a moment that seemed to last generations.” This, I believe, is what Chang’s writing does for the reader; she creates a microcosm of life through a counter-assimilation lens. 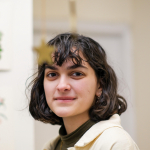 Shan Rao (she/her) is a second generation Indian American writer raised in rural Minnesota. Her work has been published in (un)common sense and The Comma and has won the Margaret Lamb Writing to the Right-Hand Margin Award and Suzanna Cohen Legacy Prize. She is part of Fordham University’s class of 2022 and currently lives in NYC with her two cats.