Maria Zhang, an award-winning Polish-Chinese actress and artist, is a talent defined by her multitudes. The accomplished actress, who just wrapped filming the guest lead role of Suki on Netflix’s Avatar: The Last Airbender, has been on a roll recently, captivating audiences with her lead role in All I Ever Wanted, a 2021 Film Independent Project Involve short film that broadens what an Asian and Asian American experience looks like by showcasing a joyful queer love story between two teenagers. The short was the official selection at Outfest Fusion 2022, at Los Angeles Asian Pacific Film Festival 2022 and at Wicked Queer, Boston's LGBTQ+ film festival.

Fresh off the coattails of the festival circuit and an ever-growing list of performances on leading streaming services, in independent features and in international theater, Zhang was the obvious choice to kick off CREATION, Hyphen’s original video series.

This series, co-created by Hyphen’s Video Producer James Chung and Senior Film and TV Editor Christian Ting, seeks to bridge the gap between the talent and the personal projects that have inspired them. The results are illuminating, reflexive short films that encapsulate each talent while offering a glimpse into their worlds, hopes and dreams. The exclusive online video series hopes to further cement Hyphen’s connection to the entertainment and media space, highlighting a mix of up-and-coming and established talent across all industries including film, television, music and more.

Zhang, who is no stranger to film projects, from mainstream commercial features to award-winning independent cinema, deconstructed her worldview by bringing our crew into the fold, sharing candid poetry, drawings and reflections on her life. Zhang floated between scenes with charismatic flair and rooted her exploration of self with sincerity and intention. Reflecting on the origins of her story, she talked about her upbringing performing local plays and enjoying summers in her native Poland with her family:

“We created this bubble of a world purely based on our imagination, where people get to come and be a part of [it] and be transported,” she said of the nostalgic time she spent there.

Like many creatives looking to formalize their passion in a meaningful way, Zhang reached a point where natural steps toward legitimizing her career started to take shape.

“I just felt like it was a calling, and thinking back on my life, the happiest I’ve been was when I was in Poland, running around on the field, rehearsing these dances, running these lines; I felt like I would always regret it if I didn’t try it — which then led me to L.A.”

Landing in L.A., Zhang attended USC, where she studied acting as an undergrad before being discovered while performing the play “Amsterdam” during her junior year. Her breakout performance in the play drew the attention of a talent manager, who signed her, and then the work began to build out her next steps as an actress.

Zhang’s big break occurred when she was cast as Suki in Netflix’s upcoming live-action adaptation of Avatar: The Last Airbender. Far and away the most anticipated new TV show on the popular streaming service next year, Zhang reflected on her time on the historic set for the flagship, Asian-led show, which featured Asian American showrunner Albert Kim, a primarily Asian cast (a faithful nod to the source material) and even a mainly Asian crew. These remarkable precedents, which exist as a rarity by most Hollywood production standards, were not lost on her during her time on the show.

“Film has the power to make people feel like it’s okay to be a little different, and it’s okay to not know who you really are and where you belong just yet. I just hope I can continue to inspire people through my craft and give back to the community that gave me so much while I was growing up,” Zhang said.

By all accounts and multitudes, she’s well on her way.

Maria Zhang is a Polish-Chinese actress who trained in the bachelor of arts program in Dramatic Arts at the University of Southern California. Maria has performed at the Beijing Playhouse as a part of China’s English Broadway Theatre, as well as part of a nonprofit community theatre group in Poland, “Stowarzyszenie De-Novo.” She speaks English, Mandarin, Polish and Russian. 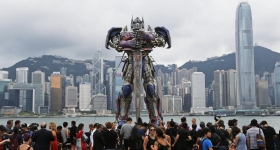