The show explores the role of an activist and wannabe change-maker both in the armchair and on the ground, and begs a question I have asked myself too many times: How do we know we’ve made a difference? On social media, finding meaning in one's work is translated into positive feedback and social reinforcement in the form of “likes” and retweets, or shaming a person into silence for their bigoted comment. There is evidence, in numbers and analytics, of the effect a person’s presence has in different online spheres -- and when those numbers go up, boy does it feel victorious. Wong reflects on the reach of her nuanced performances against her viral clickbait, and the addictive quality of online “dialogues” and social justice vindication. When confronted with the idea that she’s not truly making a difference, however, Wong decides to get her hands dirty in the struggle. But offline, making a difference is synonymous with the names of famous figures who have left their mark on the world. Behind Wong on the set is a New York Stock Exchange ticker with names like Yuri, Gandhi, Aoki, Malcolm, and Boggs going up and down in value. These are the names we have to go on, but are they enough?

So Wong does what any privileged, crisis-stricken woman might think to do: she goes to Africa. Her commentary is transparent. Wong isn’t afraid of showing us her mistakes, taking us through her naive journey to Uganda where she is considered a “mzungu,” a white person, according to most Ugandans she meets, and where she experiences every facet of white guilt and awkward racism that a white woman traveling to Africa might experience. She begins to question whether her voluntourism is necessary, or even beneficial. A big part of the premise in “Wong Street Journal” is Kristina Wong’s appeal for the privileged to go through these experiences and understand them, rather than try to skirt around them. She mostly conveys this by rapping.

One of my favorite things about Kristina Wong is that she makes not being afraid look like one of the easiest things, whether it comes in the form of dressing up like a vagina, crashing Miss Chinatown pageants, or making it rain hashtags onstage. The show maintains its hilarity and accessibility without ever talking down to its audience. “Wong Street Journal” is absolutely worth seeing. It has made its debut in San Francisco’s Z Below this week, and will continue through the weekend with an additional show Sunday, June 21. 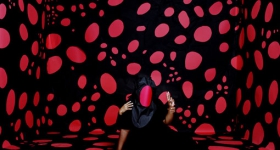 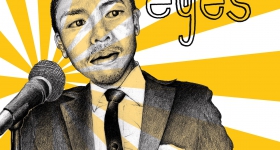