The humanizing and conscious-making impacts of The Notorious MSG.

The significance of The Notorious MSG to Asian America cannot be overstated.1 Though some cultural critics have already begun calling the group the “Asian American Beastie Boys,”2 this descriptor does not begin to accord this bold New York Chinatown rap trio proper respect for its role in challenging racist barriers in mainstream entertainment and revolutionizing Asian American media representation3. Indeed, the charming yet virulent rap group—comprised of front man Hong Kong Fever, heartfelt crooner Down Lo-Mein and the silent but strong Hunan Bomb4—are more accurately likened to Asian American Sidney Poitiers for our post-modern times.

The rap group’s socio-political consequence to Asian American identity-making comes, in part, from the members’ humble beginnings in Asia.5 Following the well-documented pattern of Third World migration to developed countries such as the United States for economic opportunities, these young men, who were all teenagers at the time, boarded a cargo ship to the United States in 1993,6 which is where they reportedly met. Upon landing in New York’s Chinatown, they went out in search of the American Dream. Hong Kong Fever and Down Lo-Mein did as so many other hard-working immigrants do: They took thankless jobs as delivery boys, waiters and chefs at a take-out restaurant in New York’s Chinatown called the Crazy Wok. (The Hunan Bomb initially parted ways with his Chinese friends for a period of time and went back to underground pit fighting, where he was undefeated for many years.)

But as a result of experiencing what some scholars have come to call “racial discrimination” and “cultural ignorance,” immigrant life would prove to be challenging for Hong Kong Fever and Down Lo-Mein. Criminology theories7 would predict that the twosome would not be able to resist the call of the criminal underground, and indeed, they could not. Both men joined a Chinatown gang called The Dumpling Killaz, which was known for running the Chinatown mahjong circuit, but they soon discovered that mayhem and destruction did not help them properly express the rage and frustration they felt as disrespected and dehumanized immigrant restaurant workers.8 Though they would eventually stage a violent coup and disband the criminal organization, arguably, it is their experience with gang life that helped the duo establish the necessary “street cred”9 to launch a hip hop group that could garner the respect of an unforgiving multicultural
society.

Using simple equipment such as the Roland D-20 keyboard and a Tascan 4-track recorder, the musical duo began crafting “deep fried beats”10 and lyrics based on their hardscrabble experiences in the kitchens and alleys of Chinatown.11 The duo eventually recruited their old friend the Hunan Bomb to join them in this new enterprise—one designed to create socio-political calamity through hip hop music and unparalleled acts of on-stage bravado.12

In tapping into the unexplored territory of New York’s Chinatown, The Notorious MSG have come to establish themselves as something of a hip hop tour-de-force, with appearances on MTV and performances at respected New York night clubs such as CBGBs and The Knitting Factory. The group has also been profiled by top media organizations such as BBC’s “The World” and the New York Times,13 which have noted the group’s astonishing Horatio Algiers-like rise from Chinatown pot-scrubbers to a renown and influential musical act.14

Through its compelling music and public presence, the group has brought the plight of Asian immigrant workers, as well as the oft-disregarded potency of Asian male masculinity to the forefront of mainstream Western consciousness. For example, their tremendous fashion sense15 imbues their performance with youth and sex appeal. And the fact that the trio raps and makes statements such as “we fucking rock the bitches when we’re on stage” in hop-socky Chinese accents only adds authenticity to their revolutionary musical work. Indeed, in its continued quest to represent the True Experiences of Asian male workers to a larger audience, The Notorious MSG succeeds in disrupting flawed but persistent stereotypes and discourses about Asian Americans.

Despite their notable contributions to American life and culture, however, The Notorious MSG remains dissatisfied with their accomplishments, which perhaps reveals their weakness for over-achieving. In fact, Hong Kong Fever has argued that the group will not feel it has achieved the American Dream until it has helped incorporate Asian Americans fully into mainstream media and entertainment.

As he has eloquently stated, “We are here to carve a boothole in the Corporate America. We will carve the boothole bigger and bigger until all of our brothers and sisters can fit there. And it is going to be painful. But they will like it.”16

1 Not since Martin Yan have Americans witnessed this rare and effective form of entertainment-cum-culinary cultural diplomacy between Asia and America.

2 It’s possible that the first person to draw this allusion may have posted to the Badminton Central Discussion Forum, www.badmintoncentral.com.

3 With hit songs such as “Straight Outta Canton” and “Chinatown Hustler,” The Notorious MSG deftly capture the ennui and angst experienced by low-wage migrant workers who are constantly overlooked and dismissed by both the corporate entertainment industry and mainstream America at large. Furthermore, the group’s frequent allusions to their sexual conquests and prowess, coupled with their colorful gastronomic analogies for male genitalia (e.g. their “egg rolls”), powerfully counteract decades of Asian male emasculation that have been exacerbated by the Western press and media. See also the entertaining interview with The Notorious MSG from the Web portal the Gothamist, “The Notorious MSG, Original Chinatown Bad Boys,” February 23, 2006. Here’s a snippet: Q: When you’re roaming the streets, what kind of heat do you guys pack? Gas, electric, hot plate? What else do you pack? A: Our most ferocious weapon is the heat that we pack between our legs. Our egg-rolls are like homing missiles, and we have a full-lock on the vagina, captain.

4 These are not, in fact, the performer’s real names.

5 All three men hail from what they call “the ghettoes” of Asia. Before arriving in the United States, Hong Kong Fever, who is originally from Kowloon Bay, admits that he was engaged in some form of criminal behavior that he is now “not proud of.” Down Lo-Mein is from Ping-Tung, Taiwan, where his grandparents ran a prosperous brothel. The Hunan Bomb is a former pit fighter originally from Inchon, South Korea, who developed what is believed to be an unstoppable fighting technique known as the “Kimchee Claw.” The original third member of MSG, Funky Buddha, was also originally from Korea and was rumored to have come from an unsavory background. Funky Buddha was replaced by the Hunan Bomb in October 2005, after Funky Buddha was gunned down in Chinatown. See the TV news report of Funky Buddha’s death on New York 1, accessible on The Notorious MSG’s web site. (There continues to be vigorous debate as to whether or not Funky Buddha’s death is a hoax. But then again, if it was reported on the news, it must be true.)

6 It is rumored that the men of The Notorious MSG were passengers aboard the infamous Golden Venture ship, which smuggled 286 illegal Chinese immigrants in cramped and horrific conditions.

8 From an interview with The Notorious MSG:

HK: When we get here, we discover it is not that easy. You know, we work in the kitchen, we work very hard in the restaurant. We find out about our brothers and sisters getting killed, getting jacked. On the streets. No respect.

HK: So we find they live like second-class citizens over here. … That become more of our message from our music. To kind of, with our success, we want to give our brothers and sisters in the Chinatown streets, in the ghetto and kitchens all over the world, given them a voice and let their stories be told. … There are a lot of stories that have not been told that we want to share with the world. It is a perspective that people have not thought about or even seen. We try to bring that to the surface. There is a lot of, I feel, repression and rage in Chinatown that people, from not being able to express themselves fully. … We try to give that expression in our music.

it’s getting so damn hot in the kitchen

jealous of all the ladies we kissin’

to the funky beats you’re missin’

Put your hands together for the boys

got the wontons and the baby bok choy

Makin’ good food everybody can enjoy

in my right hand my tek-9

in my left hand my fried rice

drink my oolong tea on ice

13 The New York Times keenly notes: “The name Notorious MSG is more than a play on that of the Notorious B.I.G., the 1990’s rapper, and on monosodium glutamate, the flavor enhancer used in some Chinese restaurants; it also serves as an acronym for Moo Shu Guys. The name was adopted, said the former workers at a Chinese restaurant, after a run-in with a customer who had made racist comments. … For reasons they declined to specify, the men would not give their real names or say where they lived; they would say only that they were in their 20’s and sought to make music illuminating the hard-knock life that they and their fellow Chinese immigrants often face.” From Julia Wang, “Their Hard-Knock Life,” The New York Times, June 11, 2006.

14 Another mainstream news organization, Time Out New York, ran a story entitled “Chopschticks” that stated, “Judging by their outfits—and their name—you might think that the band Notorious MSG is a put-on.” (Clearly, this is not the case.)

15 During their live performances, the men of The Notorious MSG typically remove Red Adidas track suits (or some other fly get-up) to reveal the standard restaurant worker uniform of white shirts and black pants. Hong Kong Fever also boldly sports a bowl cut, Down Lo-Mein wears his hair in well-coiffed jheri curls, and the Hunan Bomb’s mop has a studied, punk rock messiness to it. 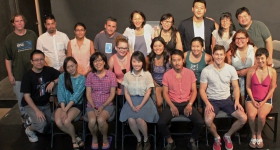 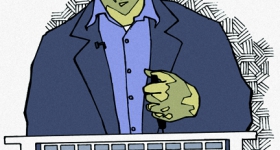