Performance artist Robert Karimi gets to hearts (and minds) through the stomach.

MERO COCERINO KARIMI, alter ego of performance artist Robert Karimi and star of the new theatrical traveling cooking show Cooking con Karimi (con Castro), was born 10 years ago at San Francisco's Galeria de la Raza. In his first gallery show, Karimi built the Kitchen of Experience, an installation constructed out of comic books, spices, and copies of recipes from Karimi's life. Every Saturday, revolutionary chef Mero Cocerino Karimi popped up to tell a story and feed everyone in the audience with his own home-cooked food.

Cooking con Karimi is now traveling across the US, from New York and the National Asian American Theater Festival to Anchorage, AK. Mero Cocerino Karimi and his leftist right-hand man, Comrade Castro (the alter-ego of co-writer John Castro), serve up stories, comic improvisation, surprise guests (including elected politicians), and food to audiences who never know what to expect.

"I love surprises and keeping the audience on their toes. They're coming into the ride and have no idea what they're getting into, except getting food," Karimi explains. "It's just like going to dinner. We know we're going to eat, but we don't know what the conversation will be and who's going to show up."

Karimi inherited his improvisational spirit from his Guatemalan mother, who wanted to make Iranian food for his father but couldn't communicate with the Iranian in-laws due to the language barrier. Instead, Karimi's mother created her own recipes with the help of his father's memory.

"This is how I learned to cook-adaptation, memory, improvisation," says Karimi.

These qualities are integral to the make-up of the show, which reflects the different talents and energies of the audience. Through improvisation, Karimi helps people create and build characters by exaggerating certain qualities and features to create caricatures.

Mero Cocinero is an exaggeration of Karimi's real self. "I truly am a social idealist. I really believe that the people can change the world. I still believe this, but I have a lot of bitterness. But Mero Cocinero is my idealism shot to the moon," Karimi says.

Food is but an entre into a philosophy that Karimi has been developing as part of his creative work, the idea that identity is always in flux and shaped from pieces of our lived experiences and interactions. This philosophy of "sampled consciousness," an idea borrowed from hip-hop, is that identity is negotiated and that we sample, blend, and fade in and out of the various subcultures and experiences we come into contact with to create the self.

This idea is at the heart of what Karimi and Castro believe Cooking con Karimi (con Castro) is about. "Cooking is applied as a metaphor for racial politics, which I have a big problem with. This show on one level is attacking that idea that you are what you eat. The way that people get to Asian culture through Asian cuisine. 'I've had chow mein; I'm Asian. I've had lumpia; I'm Asian,'" Karimi explains. "We're trying to say, 'Hey, instead of finding an understanding just because you eat the food, the food should be the point of departure to come to understand each other'. Instead of saying, ? had a burrito, I know Mexicans now,' why not make a spread and have everybody come together to talk about ideas? Start with family, then strangers, neighbors. From the neighborhood, get to the city. This is the way we're going to have cultural intersection."

However, Karimi acknowledges that not everyone knows how to work with performers from a mixed background doing mixed-genre work. "They often ask, 'What community is your show for?'" says Karimi. "And I don't know how to answer that because that means I have to define a community. You can't get all pissed off about it, because how many Iranian Guatemalan performers are there? You just have to educate, and tell people this show is for everybody."

EL MERO COCINERO KARIMI PUTS IT ON THE CHOPPING BLOCK

Could you describe your creative process?

Well, sister, I like to take whatever's in the kitchen and put it together. My mother taught me that we are poets in the kitchen and that we should not follow the letter of the recipe. Language is meant to be interpreted, so you should have the choice to make food the way you want to, and that is what we do. We come together to cook with the people. We try to keep everything organic, to follow the seasons so we can work with local farmers.

How did you learn how to cook?

I went to Paulo Freire Culinary Institute, where they taught us how to be political chefs. I took my family's recipes and learned to interpret them my way. Go to someone and say, "What's a recipe you love?" And watch how their face changes, because many times who we are comes out in the recipes we share.

What is your favorite recipe?

Sister, that's a very hard question. Right now, I'm really enjoying salmon ceviche (salmon and Sriracha, dill, Mexican oregano, tomatoes, cilantro and lime) in Alaska. Mix it all together and chop it up. Red, white, green, little jalapenos. I try to diversify the colors so they're beautiful. Always make sure that before you eat any meat, you ask for permission. Because the fish is giving its life for you so you can live. Native people were always thinking about the spirits of the food they ate and were thankful for them. We should be thankful for those living things that sacrifice their lives so we can eat. We're just caught up in Thanksgiving because some oppressor told us that's the only day for Thanksgiving. It's every day.

What advice do you have to improve people's culinary habits?

Number one, sister, is to not eat alone. Always find a way to eat with someone even if it's with a stranger. It's the best way to build community and eat better. Try to find some way to cook together as a family or as a community. It's fun and it's the best way for the revolution to start in the kitchen.

Ching-In Chen is the daughter of immigrants and a master of fine art candidate at the University of California. Riverside. 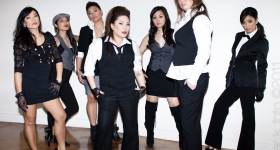