Without hotdogs and spelling, what do we have?

Yes, it was only a spelling bee. And yes, it was only hot dogs. But Kobayashi's three hot dog loss to Chestnut has left Asian Americans with one less bad ass to call their own. A few years ago, SNL featured Kobayashi saving a town by soaking up flooding waters with hot dogs and eating them, an apt metaphor for the superhuman expectations placed on Asian Americans.

True, there is still Korean American Sonya Thomas holding strong at fifth place in the International Competitive Eaters rankings. But since when was fifth place ever good enough? And there was something about seeing Kobayashi, seemingly just another small, passive Asian man, obliterating his oversized competitors in the most American of competitions. Perhaps that would inspire even the most wirey of Asian American boys to one day use their unsuspected talents to beat white boys at their own game.

Asians can't even dominate Dance Dance Revolution anymore. Everyone and their mom has played it and can probably dish out the moves. DDR Freak is a DDR forum that provides players tips and information on where to find the arcade game. If its moderator of the month feature is an indication of anything, only three of their 12 featured moderators are Asian.

Coupled with the white Scripps Howard champion, one has to wonder-what gives? Are the losses in useless contests like hot dog eating and obsessive spelling a glimpse of what is to come? Will Asians soon lose their model minority status and be considered, well, normal?

In 2003, David Jung, better known as "C-Diddy" on the air guitar circuit, won the title of US Air Guitar Champion and went on to be the first American to win the international context. He was followed by his prodigy MiRi "Sonyk-Rok" Park who took first in 2004, both here and internationally. The 2005 contest brought US champ Fatima "Rockness Monster" Hoang and his Wonder Women fringe cuffs.

Thank goodness for air guitar. It just goes to show there may be hope. Asians aren't beat, yet. -Amanda Stupi 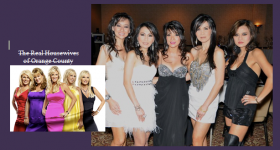 Real Vietnamese American Housewives of Orange County: a.k.a. My Mom and Her Friends