I recently frequented one of those quaint Brazilian/Argentine steakhouses-also known as a churrascaria, where waiters donning the affectations of South American cowboys bring big skewers of meat to your table until you can eat no more. The two main groups of people in the gluttony-fest were the expected large groups of dudes, and then unexpected-at least to me-Asians. There were older couples, young families, large parties, little girts with bowl cuts and frilly dresses and balding grandmothers-all gnawing away on thick cuts of meat. Why exactly did Asians flock to this establishment? As a beef-eating Hindu, I guess I always feel a bit guilty about eating chunks of meat around my elders ... but it just didn 't seem to be the case with these folks. What's the deal?

First off, admitting your grilled flesh fetish-a Hindu Hin-Don't if there ever was one-is step one in slaughtering the sacred cow of guilt. (A meat-eating Hindu, is it like driving yourself to a Green Party rally or like reading Hustler while listening to Sleater-Kinney? Just curious.) The Asian love affair with meat, Hindus notwithstanding, is well documented. Koreans have their kalbi. Japanese farmers hand-massage cows, relaxing them for their eventual transformation into a delicious Kobe beef burger. The Mongols especially loved them some fire-kissed meat. After a long day of rampaging and attacking weaker empires, the early Mongols would settle down to skewers of beef, mutton, horse and camel, washed down with a palate-cleansing tea aperitif. InterrogAsian is only familiar with churrascaria spots advertised in airplane magazines so this question might be out of his frame of expertise. I do know that churrascarias are expensive, so the fact that you're seeing a bunch of Asians there begs further questioning. Were they wearing matching visors and did they arrive in a big tour bus? Were they clutching 2-for-1 coupons? More likely, what you saw is yet another example of yellow flight. Since white folks have infiltrated the grimiest Asian hole-in-the-walls, Asians deem it no longer "cool" or "authentic" to be seen there and what better restaurants to inhabit-a cuisine that recalls a Mongol tradition. Then again, maybe Todai was closed that day.

Every morning, my roommate (he's Japanese) digs in his ears with an ear pick. When I asked him about it, he said "doesn 't everyone have one?" I missed that memo. What is up with the ear picks? Is it just a Japanese thing? Hurry because I'm sick of cleaning up wax dregs on the bathroom sink. It's disgusting.

-Frosty Flakes in the Mission District

Your question reminds me of a recent Reuters report on the acceleration of human evolution that listed examples like Africans' genetic resistance to malaria and Europeans' growing ability to digest milk. Asians? Our big genetic step is dry earwax. I wish I was joking. That said, your roommate is definitely not alone; he's just one of an army of pan-Asian earwax scrapers, and personally, I love my ear pick. They have them at every Japanese sundry shop right by the cash register. I've even seen a Hello Kitty version. God knows how many times my wife has seen me in my boxers, head askew, concentrating, sticking what looks like a torture device in my ear and scraping with impunity. I figured out every nook and cranny of my ear holes and go sick, much to the chagrin of otolaryngologists (a.k.a. ENT's) whose advice to "not stick anything smaller than your elbow" in your ear fell on hearing-impaired palm fronds. In Hanoi, there are street vendors strapped with headlamps who see that no dirty ear goes unclean. But unlike Hanoi, ear canal maintenance should be confined to personal quarters, something your roommate should adhere to, so gift him some Handiwipes and avert your eyes. 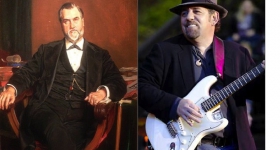