Sound Waves Across the Pacific

THE ONLY ACCESS I had to my parents' native music of Cambodia was through my father's cassettes, an impressive collection that he had borrowed and copied. The flaps of the cassettes bore cutouts of American women from fashion magazines. In some ways, the tapes' aesthetic is a good analogy for an old sound repackaged with a fresh new face.

The sounds of Southeast Asian nostalgia have made their way across the Pacific. The rise of bands such as Dengue Fever, a six-piece outfit based in Los Angeles that plays Cambodian-infused psychedelic rock, and Neung Phak, a seven-piece Oakland, CA, group that plays a mélange of Thai, Lao, Cambodian and Indonesian folk and pop music, begs the question: Is this a new musical trend or just hipster novelty?

Neither of these bands will come up on a mainstream radio play list-you really have to seek them out. Although Dengue Fever's latest tour promoting their Venus on Earth album has gone international, they, along with Neung Phak, are not crossing language and cultural boundaries in the way the Buena Vista Social Club did.

Despite the recent popularity in hipster circles, Asian-infused or inspired music is definitely not mainstream, nor a new idea. Red Chamber formed more than 30 years ago and recently reunited after a 20-year hiatus, playing what sounds like rock 'n' roll meets Chairman Mao. Dengue Fever and Neung Phak have more of a pop sound, doing both covers and original work.

Instinctively, I feel a sense of ownership and entitlement to this region. But really, my feelings are more of a longing for the world to acknowledge my country-and in turn, to acknowledge me. All of a sudden, what's only been known in the home or at awkward Hennessey-laden weddings has become hip to the white folks. (We all know a crossover is a success when there are white folks paying money to hear it.) In spite of my own uncertainty about a remixed Indochina, perhaps there is a place for this sound.

Still, it's tough to know what to make of the future of this musical melding. Events like the monthly Pogo in Togo in New York City's Lower East Side play what they call "new approaches to psychedelia" and "repurposed" sounds of Southeast Asia (and other regions) from labels like Sublime Frequencies and Hop Frog Kollectiv.

As for the bands' take on the music fusion, Senon Gaius Williams, bassist for Dengue Fever, says: "We didn't get into Cambodian psych [edelic] rock to be a Cambodian psych [edelic] rock band. We did it to create a band that can further explore Khmer sounds that were lost too soon. We're futuristic, a hybrid resurrecting the dead with a robot hand."

Mark Gergis of Neung Phak sees this as a way to "bridge the misunderstandings" between Westerners and Asians. "Both Neung Phak and Dengue Fever have helped bring Southeast Asian sounds to a Western audience that may never have heard this music otherwise, and that can only be a good thing," Gergis says.

The truth is, whatever apprehensions a native of Southeast Asia may have, it feels good to finally be noticed. Much in the way that these musicians discovered old Cambodian, Thai and Indonesian pop music, Americans are slowly discovering Southeast Asia after Vietnam. One band wants to resurrect the dead and help the hybrid sounds outlast their successors; the other sees the melding as a stepping stone for Westerners to really learn about this still relatively unknown region. At least now, Southeast Asia can be known for more than genocide, dictatorships and vegetarian Thai restaurants. If you throw in some pretty Asian girls singing in their native tongues, that doesn't hurt either.

New York-based SOKUNTHARY SVAY, a Khmer American writer who has studied the Khmer Rouge and their influence on literature, found that the biggest challenge to writing about the rise of Southeast Asian-inspired bands was "trying to be honest about my view of their music in relation to my feelings about Americans and their perception of Asians, particularly Southeast Asians." Her essay on what she deems her most memorable road trip-her family's return to Cambodia was published in the anthology Homelands: Women's Journeys Across Race, Place and Time (Seal Press).

Sokunthary Svay resides in Queens, NY, with her husband and daughter 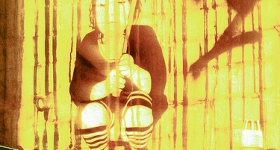