What are the boundaries of the body? Look closely at Gina Osterloh’s images for the telltale signs of a body in search of connection. Legs sink into the floor and bodies emerge out of the wall. Combining sculpture and performance, Osterloh constructs rooms of cut paper for her figures to inhabit.

Her current work emerged out of what she describes as “a frustration with photography’s desire to classify or quantify whoever was sitting in the photograph.” Osterloh says, “It all goes back to assimiliation. To the ‘What are you?’ you want to offer a blank.” For Osterloh, this “blank” is a point of disruption, a momentary gap or slippage in a basic act of communication and the territory of her work.

Osterloh, born in Texas, raised in Ohio and currently based in Los Angeles, spent a year as a Fulbright scholar in Manila, Philippines, where she frequented supply stores that carried office paper in four — and only four — colors. Sheets of that pale pink, yellow, blue and green paper became Cut Room and Rash Room (influenced by a case of heat rash). Simultaneously becoming their environments and creating them, the bodies in Osterloh’s images mimic their surroundings in otherworldly camouflage. 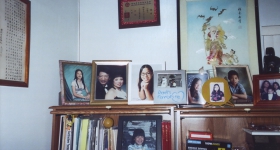