Far East Movement is the first Asian American group to top the Billboard charts and hit No. 1 on iTunes with their song about big-time ballin’, replete with champagne bottle service, dancing ladies and a top-of-the-line Gulfstream plane. The group is making history with a colossal sonic boom — and they don’t plan on landing anytime soon.

The group, which was formed in 2003, received their first break when their song “Round Round” was featured in the 2006 Justin Lin film The Fast and the Furious: Tokyo Drift. But it’s been the infectious single “Like a G6” — think of a stir-fried “Boom Boom Pow” dipped in soy sauce — that’s brought the band’s name to the masses.

Far East Movement talked to Hyphen over the phone while driving through New York about being inspired by taco trucks and Korean barbecue, how being in a music group was like being in AA and moving beyond race in music.

Kev Nish: We went with Emcee’s Anonymous because we had no idea we wanted to take this seriously. It was kind of like Alcoholics Anonymous: a bunch of people with addictions and just wanting to handle business. One day, we recorded this song in an attic in downtown L.A. — with an old-school computer, an ‘80s monitor and a Radio Shack microphone — about what we felt was the next generation of kids in downtown L.A. who couldn’t really be defined by a genre, but more defined by a playlist of music. It was being open-minded to experimenting with different sounds, bringing in everyday things like taco trucks, Korean barbecue, street wear, fashion — you name it. We loved everything in the song and called it “The Far East Movement.” That song was terrible, by the way. We deleted it, but it was a lightbulb in our head. This song described everything we were about: our ideals, our lifestyle, our musical tastes. So we named ourselves the Far East Movement and we made sure no one had our song in their hard drive. (Laughs)

Do you embrace being labeled as Asian American artists?

KN: We are really honored and grateful that our community is proud of that. At the same time, we feel, as L.A. kids, it’s an honor to hopefully inspire other backgrounds as well — African Americans, Latinos, Caucasians — because those are the artists we grew up with. We grew up in a scene where it’s so multicultural and when one of us comes up, it is about one of our people in L.A. representing. It’s also a free-wired world where people see you by your screen name or Twitter name. You’ll hear a song on a radio, not knowing the artists or the artist’s race, and then find out later. The world is becoming more open-minded in that race doesn’t matter.

KN: We treated MySpace, Facebook and all sites like those as if we were meeting someone in person. Like going to a show and shaking everyone’s hand in the room — we took that seriously. Every time someone would add us as a friend, we would write them saying: “Yo, what’s up? Good to meet you. What city are you from?” We value that relationship. Of course, as we got busier, we had to find other ways to stay in touch. Nowadays, we’ll go on cherrytreerecords.com [an imprint of Interscope Records] and use that to stay connected.

How did you know that the route you were taking would be successful?

KN: It was hard because we’ve had management in the past who lost all faith in us, and there were points in our lives where we thought there were no other ways to go. But we stuck together. People would say, “Oh, those guys are delirious. How can you get into music?” or “Might have to go solo. No chance of being in a group.” But as brothers, we were each other’s support system. We had an incredible woman by the name of Diana Tran, who’s this fab executive director for the International Secret Agents Concert [an annual event that features emerging talent in the Asian American community] we produce with Wong Fu Productions. Diana is the mother and backbone behind our business. It was people like that. And, of course, our fans. They keep us constantly pushing harder and fighting for more.

What kind of day jobs did you have when you were coming up?

Prohgress: We did all kinds of crazy stuff. I mean J-Splif used to do all kinds of jobs from office managing until 5 p.m., then writing and recording with us until 3 to 4 a.m. and then going back to work at 6 a.m. again. He never slept.

KN: Remember when J-Splif had that taco cart?

P: He was rolling tacos.

KN: We were bag boys. I was a valet attendant and then we actually interned at Interscope Records. That opened our eyes to a whole other side of the business that we were so intrigued by. That changed our perspective to go hard and really go all the way.

Where did you film the video for "Like a G6"?

P: That’s So Hyang restaurant in L.A. near Wilshire. It’s my dad’s friend’s restaurant. Get kimchi and soju!

Why are you all single? Doesn’t it get lonely on the tour bus?

KN: We have our Cherry Bombers — that’s all we need. Our focus is our music and our fam and fans. It never gets lonely when you have so many people supporting and representing.

If FM was on a G6 and the pilots were incapable of flying, which member would take over and why?

KN: DJ Virman. If he can man a turntable, I’m sure he could fly a plane.

There’s so many parodies and covers of your songs “Rocketeer” and “Like a G6” going around. Which one has been your favorite so far?

P: We actually were just at a radio station earlier in Boston and a couple of the DJs made a good one. Their rendition was “Fried Like a Cheese Stick.” (Laughs) 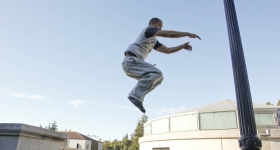 kate wrote on Wed, 01/19/2011 - 8:26am
LOVE Rocketeer!! Far East Movement has been doing some really cool stuff lately! Check out this sick android they designed for that MetroPCS contest, Android For All. It totally looks like them, suit and everything!  http://www.androidforall.com/gallery/fem
Jimmy wrote on Fri, 01/21/2011 - 11:34pm
let me start by saying i'm ecstatic an asian-american group has made it this far! (#1 on the charts)    i just really hope they can maintain this success. we need an asian american presence in the music industry. people need to see we're capable of being loose, fun, and creative.   so, support 'rocketeer' whenever you can! hopefully they can follow that with another smash hit single!
Pat Noonan wrote on Wed, 02/09/2011 - 10:45am
Rocketeer is too good, I just posted up an acoustic version here: http://www.youtube.com/watch?v=BZIoFl_S79M I can't wait to hear what they put out next!
sweetpotato wrote on Tue, 02/15/2011 - 3:04pm
LOVE, LOVE, LOVE FM! Rocketeer is Amazing!!!!