With this issue, we welcome editor Karissa Chen at the helm of both Hyphen’s Fiction section and our debut Poetry section. Chen’s goal is to showcase the breadth of Asian American literature today and offer a balance to Hyphen’s journalistic works. “I hope readers are moved or in some way changed by the pieces,” says Chen, who lives in Guttenberg, NJ. “Literature should be personal, and I hope readers become as invested in the experience of reading as the writers were in writing.” A hallmark of her generation? “Narcissism. We live in a world where we assume everyone gives a damn about what we have to say. I’m completely guilty of this myself, as anyone subscribed to my Twitter feed should know. But some people mistake having a voice for not having to listen.”

In Hyphen’s new Health section debuting in this issue, editor Dharushana Muthulingam hopes “to peer into the dank underbelly of health, illness and death as experienced by Asian Americans today.” A resident physician at Kaiser Permanente in Oakland, she believes that health and health care are universally experienced in a deeply personal way, “either in the quotidian or in the most intense cliff edges of mortality itself. I hope readers get a chance to glimpse this rich maelstrom that comes from living and sharing our deeply fragile but surprisingly robust bodies.” A characteristic of her generation: “A fondness for mason jars. I am susceptible to this as well.”

Illustrator Sophia Chang’s work is featured throughout this issue’s Food section. Based in Queens, NY , Chang has worked with a variety of companies including Nike, Complex Magazine and Anthony Bourdain’s No Reservations.

Weston Teruya graces our pages as a writer discussing the visual culture of public space, but he has previously contributed an illustration for one of our early issues and was also featured in Hyphen as an artist (Issue 19’s Artwell). “In my writing, curating and artistic practice, I always want to be a part of an effort to broaden the ways we can talk about the practices of Asian American artists,” the Berkeley-based Teruya says. Of his generation, he says, “I feel like I’m in an in-between Asian American generation — educated by Asian American studies and the legacy of multiculturalism but trying as an adult to sort through the relevance of panethnicity, the persistence of racism and a drastically different pop culture landscape.”

Over the past four issues of Hyphen, Angela Pang has interviewed a range of memorable characters, from children’s book author Kathryn Otoshi to jazz phenom Vijay Iyer, San Francisco International Asian American Film Festival director Masashi Niwano and viral video charity founder Eddie Lee. In this issue, her final as contributing writer, she gets streetwise about the L.A. fixed-gear scene with rider Joey Inferno. Pang is currently the community relations manager for the AsianWeek Foundation and helps organize the Asian Heritage Street Celebration, the largest pan-Asian street fair in the US.

Contributing editor Nicole Wong spent four months following a research and leadership program for caregivers at San Francisco’s Filipino Community Center for her story in this issue on this oft-neglected workforce. “The trainings were conducted in a fluid mix of English and Tagalog, and a volunteer was always kind enough to translate the conversations — and jokes!” says Wong, who has been on Hyphen’s staff since 2010. “Among all of the very serious and honest conversation that happened around worker abuses and discrimination, there was also a lot of laughter.” Her list of trademarks of her generation (and whether they apply to her): “Harry Potter (yes, faithfully), funemployment (briefly after college), Words with Friends (yes) and yoga butt (yeah right, I wish).” 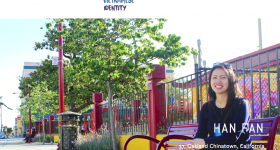 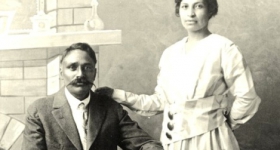