From Panthers to Patients at Asian Health Services

The sometimes quiet revolution of the community health center.

“Happiness is nothing more than good health and a bad memory.” — Albert Schweitzer

Litter-box protozoa that overtake your brain. A sweeping revamp of the health system of the world’s richest nation. A DNA-based dating service. Welcome to the wide world of health. Hyphen has long been ready to sashay up to the compelling institutions that shape the day-to-day, and look close. Really close. Now we take on the tumorous swell of health and society. For the debut of the Health section, we dissect the intersection of democracy, revolution and a functioning medical records system embodied at Asian Health Services in Oakland, CA. We take the personal history of a longtime physician activist. We prod into the hidden world of hepatitis B. We invite you to submit suggestions for health and society topics. There will be hand sanitizer for all. — Dharushana Muthulingam, Health editor

The waiting room is dense with activity: young pregnant women, grandfathers, scurrying children. Through a light-flooded atrium window, I can see bustling Oakland Chinatown. A sign in the bathroom says to not flush paper towels in the toilet. It is written in six languages.

Asian Health Services (AHS) bills itself as a primary care clinic providing affordable health care to the low-income, largely immigrant and non-English speaking population of Alameda County. Started in 1973, it now serves more than 21,000 patients a year and clocks 100,000 visits annually. In response to the health care-reforming Affordable Care Act (ACA), it opened a new clinic in June 2011, expanded its mental health services and won a contract to rebuild the health services infrastructure of five local community colleges.

The story of Asian Health Services and other community health centers are, on one hand, the unglamorous tale of the obscure and mundane: access to diabetic foot checks, close tracking of blood pressure, reliable language interpreters, navigating byzantine Medicare paper work. Yet, beneath the neatly kept clinic rooms and meticulously organized files are a vibrant history of revolution, social justice and dreams of youth.

“Once I learned what the community health center was and what it meant, that was really powerful for me,” Community Service Director Jen Lee said. She came to AHS 11 years ago and has since coordinated HIV outreach among vulnerable Asian and Pacific Islander women, especially those doing massage parlor work. “AHS is about not being afraid of looking at issues head on — trusting what comes up from the base and keeping the organization accountable to the community.”

Although all nations, rich and poor, struggle with the health care beast — it is, after all, a complex and dynamic industry, requiring enormous amounts of human resources, complex technology and grappling with mortality — the US health care system can be particularly baffling. We outspend the next richest country by more than twofold and yet fall behind on multiple measures of population health — such as ranking 50th in life expectancy.

Even as despair rings from across the political spectrum, there is a deep well of American history that models what equitable, accessible and comprehensive health care can look like, for example: the Federally Qualified Health Center (FQHC). This is a fairly unromantic string of words. But it is one of the fruits of social justice dreams from the 1960s. It’s a model that has received new attention as a potential ideal as health care reform prepares to make its uncertain debut in 2014, when the ACA will provide over $11 billion to support and expand these centers to meet gaps in prevention and primary care.

The community clinic has deep roots in collective organization of resources at the turn of the century in neighborhoods in New York City. It began with infant milk stations opening in Brooklyn to feed malnourished infants while their young mothers worked long factory hours. Historian John Duffy has described the district health centers that subsequently opened throughout the city in 1914, serving thousands and developing the first known systematic medical record collection. The centers atrophied with the onset of wars and depression, and health care centers were subsumed into either private clinics or church-based charities.

Decades later, in Oakland, CA, communities of color were rallying for civil rights. Against the backdrop of the convulsions of the ‘60s and amid profound urban poverty, peaceful protesters being beaten and the Vietnam War, Huey P. Newton and Bobby Seale converged the Black Panthers in the halls of Grove Community College.

The party first electrified urban youth with its controversial call to self defense and the startling images of heavily armed young men at the steps of the California legislature. But they also developed the Survival Programs — social programs providing much-needed services to desperately poor urban neighborhoods under the slogan “survival pending revolution.” These covered a broad swath, including free breakfast for hungry children, multiple free health clinics, work study aid for community colleges and transportation for disabled persons.

The health clinics and other services were the velvet glove over the iron fist: a revolution by any means necessary — but also a revolution about the well-being of communities long neglected by powers that be. Allegedly, the impact of these muchneeded programs were an embarrassment to the federal government, which expanded what are arguably the Panther-influenced social innovations across the country. In 1964, Lyndon B. Johnson declared the War on Poverty and the Office of Economic Opportunity opened.

Meanwhile in Boston, a young physician named H. Jack Geiger helped open the first modern community clinic in 1965. Geiger also organized with the residents of the deeply rural and economically devastated North Bolivar County, MS, to open the Delta Health Center. The aim of these community health centers was to provide comprehensive health services to the medically underserved — those living in poverty, the elderly, those at high risk for infant mortality and those without access to regular and preventative medical services. Then, like now, emergency rooms were slammed with late-presenting diseases and minor illnesses that would have been better addressed in primary care.

In addition to that primary care, Geiger and community residents tried to address what they perceived as the true roots of health — education, community and empowerment. The Bayou clinic provided nutrition and cooking classes. Mothers were taught how to prevent anemia in their infants. Agricultural techniques were shared and a library was opened. Its board of directors was largely composed of patients. Good health in such a deeply poor community was far more than access to pills and IVs — it was access to nutrition, knowledge, neighbors, economic survival and a sense of dignity and citizenship.

In 1967, on the other side of the country, Huey Newton was shot and arrested for the death of an Oakland police officer. J. Edgar Hoover and the FBI began a violent and systematic wipeout of the Panthers, and, still, the communities of color began rising in Oakland. Against a backdrop of tumult in 1971 and the blossoming of Geiger’s clinic, the Chicano communities opened the doors to the first Clinica de la Raza (Clinic of the People) serving poor Latino neighborhoods.

It was then that the East Bay Asians for Community Action went door-to-door in 1973, surveying the health needs of residents. Finding that the Chinatown community used medical services at half the rate of its neighbors due to barriers in language and affordability, it incorporated and began providing low-cost services in Mandarin, Cantonese and Tagalog. This was the beginning of AHS.

On the heels of this came rapid, exponentially growing tides of immigration, in which the Asian and Pacific Islander community doubled every 10 years until it became a near quarter of the county’s population. The language needs of new communities included Khmer, Korean, Lao, Mien, Mongolian and Vietnamese, which AHS expanded to meet, regardless of income, insurance or immigration status.

Today, there are well over 1,200 sister health centers like AHS throughout the nation, with expansions experienced under George W. Bush and even more anticipated under the Affordable Care Act. From the mid-1960s, when the health centers covered 100,000 patients, they have grown to cover more than 20 million medically underserved patients throughout the nation, including migrant farmworkers and the homeless. Since Geiger, they have retained their democratic roots: Patients must make up the majority of the board of directors at all FQHCs. Studies by the Kaiser Family Foundation and others have shown that the centers are leaders in quality, cultural competence and innovation, not to mention one of the more cost-effective models of health care, frequently outpacing private clinics.

What is most moving for Lee is the Center’s responsiveness to its patients’ needs. “That’s what keeps me interested after 11 years: The community piece is as strong as the quality of service,” she said. Lee witnessed this firsthand when she and others noticed an emerging pattern at the teen clinic: More young Southeast Asian women were divulging experiences of sexual exploitation. Lee worked to develop a pilot intervention to pull together resources. With others, this work ultimately led to the Banteay Srei, the first program in the nation to support the needs of this vulnerable population and its risk in the sex trade. AHS’ efforts have been profiled in The New York Times for being a leader in tackling a previously hidden problem.

Following the Panthers’ social movements and Geiger’s first clinics, AH S fiercely adheres to its tradition of community organization. It responds to its constituents at yearly town hall-style meetings and has spoken at state congressional hearings to regulate toxic fumes endured by nail salon workers. Former AHS Medical Director Arthur Chen was profiled in Time magazine earlier this year for his role in Occupy Oakland (see following story). Its staff works in or with leadership at the city, county, state and national level, and it continues to emphasize the role of social elements in the health of its patients.

“What sets us apart is we do a very good job with the advocacy part,” AHS physician Ben Liu said. “Language access, you still have to fight for it. We have our patients testify and advocate. We still retain that spirit. It is integral to our work.”

Liu also noted the future directions it plans to take with community and patient activism. Noting the national push for more evidence-based medicine and guidelines, he is currently working to establish an AHS research department to nurture more community participatory research. “The research literature has to represent our communities more and directly relate to our patients’ needs. There is a mistrust between academia and community. We can level the playing field,” he said.

Even with the high-performance track record, AHS and other community clinics live a tenuous life of funding. This began early on, with California’s 1978 Proposition 13 resulting in drastic funding cuts to many community-based organizations across the state. AHS, at the time, collaborated with local groups and organized its base in protest, ultimately preserving its funding. This struggle continues in the current economy.

“Being promoted as this ideal model of care, the pressure is on,” Lee said. “We do a great job of being creative with what we have, but with even more resources, we can really rise to the challenge. Right now we have been posed with all the challenges while the funds we need to achieve it have been pulled back.”

Back at AHS’ windows, I watch the torrent of cars stop at 8th and Webster as a four-way crosswalk lights up, and elderly Oaklanders patiently amble through. The crosswalk was built after a hard-won fight to reduce pedestrian accidents and revive the neighborhood. The same battles in American political and social history are often reinvented, rediscovered and then forgotten again. And so, we also begin again. 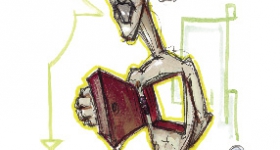