Some 250 years ago, a group of Filipinos escaped Spanish galleons off the coast of Louisiana. They were the first Asian Americans. In this issue, we explore the South, a region vital to, but often overlooked in, Asian American history.

Although most of the Asian American community today lives in the West, our numbers are growing fastest down South: Our population increased there by 69 percent during the last decade, according to the Census. In some counties in Texas, Florida and Georgia, the population exploded by 200 percent or more. It is also in the South where the relatively newer face of the community has emerged, with Vietnamese, Indians and Koreans comprising the largest populations.

So mosey with us, from Chinese restaurants to Hindu temples, from statehouse halls to a Birmingham civil rights museum. Is this incredibly dynamic region, full of deliciously rich culture and history, one we should be keeping our eye on? We reckon so. 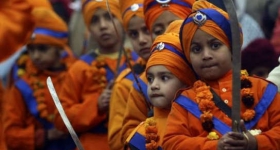