The Best Form of Flattery:

Remakes are the rage in Hollywood—and producers have rediscovered Asian film plots as a new alternative to actual creativity. Martin Scorsese is looking to Americanize Hong Kong’s Infernal Affairs, Gurinder Chadha is directing the remake of Korea’s My Sassy Girl, and U.S. studios are snapping up options for scores of other Asian scripts with names like The Eye, The Phone, The Ghost and Chaos. But is something lost in translation? Hyphen examines America’s proud history of copying Japanese invention.

Akira Kurosawa’s iconic 1954 action/drama about a septet of noble samurai warriors (including Toshiro Mifune) who help defend a village of poor farmers against marauding bandits is one of those films that instantly feel familiar. Its “reluctant heroes” theme has echoed across American cinema for decades, from Star Wars to A Bug’s Life.

In the hands of director John Sturges, Kurosawa’s windswept Japanese farm village is a desolate Mexican hamlet, and honorable samurais trade swords for Stetsons to become laconic-yet-caring cowboys led by Yul Brenner and Steve McQueen. Well-made and briskly paced, the 1960 film lacks some of its predecessor’s epic sweep, but you’ll walk away humming the theme song.
—Betsy Bayha

As adept with his wits as he is with his sword, a drifting samurai (Toshiro Mifune) pits rival gang bosses against each other in Akira Kurosawa’s 1961 classic. Although the film’s landscape and mood are clearly influenced by American westerns, Kurosawa and Mifune forge an archetypical character that went on to inspire a multitude of copycats.

A Fistful of Dollars (Germany/Italy/Spain, 1964)

Under the able direction of Sergio Leone, Clint Eastwood squinted and cigar-chewed his way into stardom in his first outing as the “Man with No Name.” It has a well-deserved place in the western Hall of Fame, but Fistful simplifies some of Yojimbo’s twistier plot devices, and somehow the fact that everyone has guns instead of swords makes all the killing seem more casual. —Betsy Bayha

From the constant rain to a literal gong hit before scary scenes, Director Hideo Nakata lays it on thick. Young Ikuko learns a valuable lesson about bathroom safety when a zombie jumps out of the tub, tries to drown her and then, inexplicably, gets adopted by her mom. Next time don’t steal dead girls’ mysteriously recurring little red Sanrio bags; eBay them like the rest of us!

Ringu starts with an urban legend: see a creepy videotape, and a week later you die in a mysteriously horrific way. A reporter investigates the tape’s origins and unearths the story of a deranged spirit having a very bad hair day. Director Hideo Nakata’s subtle, psychologically charged style transcends a low budget to create a seminal, genuinely terrifying horror phenomenon that spawned a prequel, a sequel and remakes for both Korea and America.

Gore Verbinski’s remake clearly has a higher budget than its source material. It’s shed the composed, measured style of the original in favor of the shock-and-awe approach of a Hollywood action movie—even the cursed videotape has been upgraded to something out of a Nine Inch Nails video. Despite the flash, the Hollywood version retains the terror of the original, and you’ll never look at your television the same way again. —Kat Ascharya

A curse dooms its victims to die in a powerful rage, spreading itself like a virus in the places formerly inhabited by its prey. Like other contemporary horror films, there’s a creepy little kid and a ghost that walks funny. Director Takashi Shimizu’s fragmented vignette-style narrative and dark cinematography serve up the visceral fear that the Japanese horror genre does so well.

How much of a remake is this, really? The Grudge has the same director, same sets, same story, some of the same shots and actors—only with Buffy. Sarah Michelle Gellar’s performance threads us through the episodic horror story, and if you can get over waiting for her to stake a demon, you’ll find yourself scared senseless by empty hallways and scary little ghost children. —Kat Ascharya

A simple but endearing tale of a Japanese salaryman (Kojo Yakusho) who is lured into ballroom dance by a beautiful, melancholic face in a studio window. Somewhere between the waltz, the polka and the quickstep, Sugiyama-san learns a little bit about family, valor and love. Though populated by unabashedly silly supporting characters, the film’s gentle take on mid-life ennui and domestic deception appealed to audiences around the world.

Casting Richard Gere and Jennifer Lopez in this remake sounds like a Hollywood satire, but this film actually takes itself seriously. Too seriously. It clearly panders to the “moral values” red states, giving The Wife (Susan Sarandon) the dramatic climax, but the film lacks the charm and innocence of the original. —Jennifer Huang 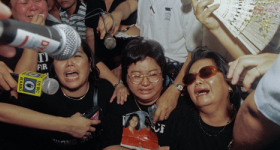