While The Flower Drum Song (1959) is the Hollywood film best known for the portrayal of Asian Americans, there are several milestone films that were more sympathetic and critical of Asian stereotypes created by the studios.

Largely forgotten today, these works were all directed by non-Asians, as no Asian American directors worked significantly in the Hollywood system of this period. Unfortunately some films have yet to re-surface, especially James Clavell’s Walk Like a Dragon (1960), a western in which James Shigeta shoots it out with Jack Lord for Nobu McCarthy’s affections (Asians in Westerns stretch all the way back to the silent era).

Meanwhile, my five canonical Asian American films made by non-Asian directors in Hollywood are:

Swiss émigré and surrealist Robert Florey is one of the lesser known auteurs of Hollywood. What’s even less appreciated is that he gave Anna May Wong not one,
but two of her greatest roles—in this film
she plays the daughter of a San Francisco Asian art dealer who is killed for refusing to help a gang trafficking illegal immigrants from China (Sounds familiar? This film was made 70 years ago!). Wong then hunts down her father’s (white) killers with the help and simmering romance of FBI under-cover agent, Philip Ahn (the first Korean American in Hollywood and Wong’s childhood friend).

Feisty yet sensitive, this was a role perfectly calibrated to Wong’s character and talent—and a forerunner of today’s Hollywood Asian heroine.

Florey next made the political critique Dangerous to Know. Akim Tamiroff plays a mobster with mayoral ambitions who discards his devoted mistress Wong in his social climb to the top. It was a pungent commentary on the marginalization of Asians in American society. For the record, Florey also wrote A Study in Scarlet, a Sherlock Holmes movie where Wong plays a wealthy widow in the middle of the English countryside (think Joan Chen in Twin Peaks) and the classic God is My Co-Pilot (about the Flying Tigers in China) that also shows the Japanese occupation of Hong Kong, a rarity in Hollywood movies.

Often forgotten amidst more recent accounts of the 442nd Regiment, Robert Pirosh’s directorial debut was the first Hollywood war movie to portray the heroic Japanese American troops. Van Johnson plays a Texan bigot who is assigned to lead a platoon including Lane Nakano, George Miki, Ken Okamoto and Henry Nakamura. Often relegated to bit parts, the cinematic pioneers were afforded their first chance at feature roles in this film.

As the soldiers make their way through training and fight their way up the Italian peninsula, Johnson learns the differences between the mainland and Hawaiian Japanese Americans, and develops a strong admiration for the men and their courage. European-educated Pirosh was one of the underrated writers of Hollywood, working with the Marx Brothers and René Clair.

A-list director King Vidor took time off from shooting big films like Duel in the Sun to
make, almost documentary-style, this refreshing take on Asian brides of white men. Shirley Yamaguchi (a Japanese star of extraordinary talent and career diversity) nurses Don Taylor back to health during
the Korean War. The couple marries and settles back in central California on Taylor’s family farm.

But the small community has strong (i.e., racist) reservations about this new addition to the fold. Alienated by their hostility, Yamaguchi finds comfort with a Japanese American farming family who tells her about being American and Japanese, and of wartime internment—virtually the first mention of the camps in mainstream American cinema. Heartfelt, with an intimate realism that makes it seem immediate even today, this is one of the forgotten gems of Asians in American cinema.

Journalist turned explosive filmmaker, Sam Fuller thrived on the controversial and the outcast. Decades of miscegenation and stereotypes are swept away in this sympathetic portrayal of love between LAPD Japanese American detective (James Shigeta in his first starring role) and white artist Victoria Shaw.

Set in 1950s Little Tokyo, Shigeta grapples with social attitudes towards his burgeoning romance, and problems with his white cop partner (from whom he has won Shaw’s heart—another landmark twist on the usual emasculated-Asian-man-and-potent-white-guy duo). Raw, street smart and savvy, this remains a major film in overturning Hollywood stereotypes.

Belgian émigré Etienne Périer made this film based on the true story of Gwen Terasaki, a blonde from Texas who married a Japanese diplomat in the 1930s and accompanied him to Tokyo during World War II, where she suffered great privations while her husband worked with the Japanese resistance. Carroll Baker headlined as Gwen but it is James Shigeta as her husband who impresses with his potential as a romantic lead.

Sadly, the imminent collapse of the studio contract system deprived Shigeta of truly fulfilling his talent as Asian America’s answer to Rock Hudson. Made in the shadow of the groundbreaking French
film Hiroshima Mon Amour (in which a French nurse falls in love with a Japanese architect), Périer worked sensitively to portray Shigeta as a man of dignity, integrity and principle—something which most Hollywood films refused to accord Asian American men.

Writer Roger Garcia is a former director of the Hong Kong International Film Festival and the author of Out of the Shadows: Asians in American Cinema. 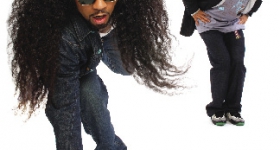