A unique lawsuit filed by a transgender Filipina adds a new dimension to the gay marriage debate.

Donita Ganzon stands at the podium of a University of San Francisco conference hall on a brisk afternoon in February. Quiet and elegant, Ganzon is about to deliver a speech about her fight with the U.S. government to preserve her marriage. On her left hand, she wears a wedding ring of diamonds cradling a black pearl. Her determined doe eyes stand out from her bronze complexion, and from the way she carries herself it looks as if she is in the middle of an artistic performance.

But Ganzon's composure belies the heat of the legal battle that she is currently embroiled in. Last fall, Ganzon, a transsexual, and her partner filed a lawsuit against former Attorney General John Ashcroft and the Department of Homeland Security that not only represents the tangled legal web that transgender immigrants face, but which also adds a new dimension to the current gay marriage debate.

Ganzons husband, Jiffy Javellana, is a citizen of the Philippines; Ganzon is a naturalized U.S. citizen who was born male but who has lived as a woman for over 25 years. The couple filed a lawsuit against the U.S. government when Javellana's green card was denied because the immigration service viewed their union as a gay marriage. In the suit, Ganzon and her husband claim that they are, by all definitions, a heterosexual couple, and should be treated equally under the law.

Ganzon says that she is ultimately asking the government to reevaluate the way it looks at gender. “I speak for the transgender, but also for the gays, lesbians, bisexuals, immigrants and other people that are not treated right by the government,” Ganzon says.

Donita Ganzon grew up in Bataan, a mountainous region of the Philippines west of Manila. As a young man growing up in Southeast Asia, Ganzon didn't know anything about what it meant to be transgender, and it wasn't until adulthood that she was able to resolve the nagging discomfort she felt about her gender identity.

Ganzon decided to immigrate to the United States in 1974, after serving as a public health nurse advisor during the Vietnam War. “America is the country of the greener pasture,” she explains. “I wanted to see America. I wanted to work in the United States—there was more money to be made.”

She got a job as a nurse at a hospital in Elizabeth, NJ, and then moved to Chicago a year later. Eight years after landing in the United States, Ganzon realized that she would be happier as a woman, and decided to have sex reassignment surgery. “I had always identified as a gay man,” she explains, “and I didn't understand my looming depression until a doctor told me to live 24/7 as a woman.”

After the surgery, Ganzon changed the gender on her passport, her driver's license, and her certificate of citizenship. Nearly 20 years after she had surgery that fully transformed her into a woman, Ganzon met Jiffy Javellana in the Philippines during a trip to see her family in late 1999.

A few weeks later, Ganzon invited Javellana on a trip to the island of Boracay and their feelings for each other solidified. “I found a soul mate,” Ganzon says. The two were engaged in September 2001, and Javellana moved to the United States on a visa for fiancé's of American citizens. The couple was married in Las Vegas that November and they quickly applied for Javellana's green card.

Things went smoothly until June 2004 when Ganzon met with the immigration service during routine interviews for Javellana's green card. There, the immigration officer told Ganzon that her best friend was a Filipina, and Ganzon immediately felt at ease. During the course of their conversation, Ganzon told the officer how wonderful it was that her husband loved her unconditionally despite the fact that she was a transsexual. Her admission, though, would unknowingly set Ganzon and Javellana on a collision course with the U.S. government.

Two weeks later, Javellana received a letter stating that his permanent resident application was denied because of the Defense of Marriage Act. In the letter, the immigration service stated that since there is currently no statute in federal law that recognizes a sex change, Ganzon was technically gay and thus, her marriage to Javellana was illegitimate.

Ganzon was outraged. In Nevada, where Ganzon and Javellana were married, and in California, where they now reside, there are state laws recognizing the legal change of gender. There is not, however, a federal law that does the same.

In an attempt to save their marriage, Ganzon and Javellana filed a lawsuit against the Department of Homeland Security claiming discrimination and asking that the government reconsider Javellana's green card application.

Beyond their rights as a married couple, at the core of Ganzon and Javellana's lawsuit is what Ganzon believes is the U.S. government's oversimplification of what it means to be transgender. While the field of sex determination has many facets based on genes, gender identity and reproductive organs, for example, official positions rely on the simple male-female dichotomy.

“We are trying to get people to under-stand that this is a science and medical issue,” adds Debra Davies-Soshoux, one of Ganzon's lawyers.

From their home in trendy Los Feliz, CA, Ganzon and Javellana can walk to coffee shops, movie theaters, and to Kaiser Hospital, where Ganzon works as a nurse. The couple also likes to go shopping and hang out at the local Filipino restaurant with friends. But depending on what happens with the lawsuit, Ganzon may not be able to share these simple pleasures with her husband. Their lawsuit will likely take months to wend its way through the court system, and the couple is currently waiting for a response from the Department of Homeland Security.

In the meantime, Ganzon continues to bring attention to her situation. Through a one-woman theater performance she is in the process of writing and bringing attention to her legal fight through speeches, Ganzon has become an icon for Lesbian Gay Bisexual and Transgender rights, as well as a cause célebre within the Filipino community.

But Ganzon says she never set out to make her personal life so public and at the root of this lawsuit is simply her desire to live happily with her husband. “It is what is in our hearts that matters, not what used to be between our legs,” she says.

Lisa Katayama works on the research desk at Wired. She lives in San Francisco. 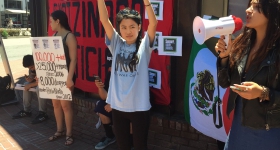