Everybody’s got a blog or podcast these days it seems, with services like Xanga, Blogspot, MySpace or LiveJournal making it easy. Hell, some crazy fool out there has all four. You don’t know it, but even your mom has a blog (I’ve seen it).

I run a blog that enjoys some healthy traffic (angryasianman.com). I’m looking at all kinds of links every day. One thing is for sure: Asians rule the blogsphere. What’s an Asian American blog? I couldn’t tell you. I suppose it’s one of those “know-it-when-you-see-it” kinds of things. So here I offer my highly subjective—and by no means definitive—Top 10 Asian American Blogs (and a podcast).

Addicted to Race (addictedtorace.com): It’s not a blog, but this podcast, brought to you by the people behind Mixed Media Watch (mixedmediawatch.com) makes our list of places to be on the Internet. Jen Chau and Carmen Van Kerckhove host a bi-weekly show exploring America’s peculiar obsession with race, with a specific emphasis on mixed-race identity and interracial relationships.

Hanzi Smatter (hanzismatter.com): A guy gets a Chinese character tattooed on his arm. It means something cool, like “courage.” He doesn’t read Chinese, but hey, everybody’s doing it. Unfortunately, what he thinks is “courage” actually means “crazy diarrhea.” Believe it or not, this happens all the time—and Hanzi Smatter is there.

Hipstomp’s Livejournal (livejournal.com/users/hipstomp): The hilarious daily insights of Rain Noe, who used to write the infamous “Love in a 10-Block Radius” column for AsianAvenue.com, back when it was the spot for all the cool kids on the net. His blog is even better.

MetroDad (metrodad.typepad.com): One man’s thoughtful, clever contemplations on being a new father in New York City. Someday, this guy’s daughter (Peanut) will grow up, look back, and realize she has the coolest dad in the World Wide Web. And then she’ll blog about it.

Michael Kang’s Xanga (xanga.com/mike2cents): For the last three years, Korean American filmmaker Mike Kang has been blogging about the travails and triumphs of making his first feature, The Motel, while offering some shrewd pop culture commentary along the way.

MinJungKim.com (minjungkim.com): I must give credit where credit is due. Back before I even knew what a blog was, I stumbled across the clever musings of KoreaAm Journal columnist MinJung Kim—Ms. MJ if you’re nasty. She’s a true OG in the blog game and still keeping it real.

Poplicks (poplicks.com): A tag team blog by pop culture pundits Oliver “O-Dub” Wang and Junichi Semitsu, deftly riffing on
a little bit of everything from race to politics to hip-hop. Their
entries consistently leave me with that “Damn-I-Wish-I-Wrote-That” feeling.

Sepia Mutiny (sepiamutiny.com): A blogger’s destination for all things Desi. It’s where I go to get down with Brown.

And don’t forget to read the musings of the Hyphen staff at hyphenmagazine.com/blog. 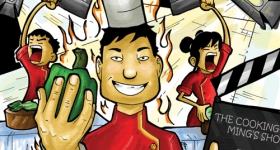