It was not a regular Hollywood or Manhattan red-carpet affair. This time the stars lighting up the night were proudly representing a demographic: Asian America. From our young and hip screen stars like Kal Penn (special honoree) and Jason Kyson Lee to those who’ve pursued music careers such as Bora Yoon and DJ Rekha, this was one evening filled with talented people from all walks of life that can serve as inspiration to a generation with more than enough visions of Britney, Paris, Ashton, LeBron, and Jake Gyllenhaal to go around. For once Asian Americans and several New York icons celebrated the community’s achievements and growing representation in the arts, and I caught up with some of them to reflect on their different paths and the event itself. 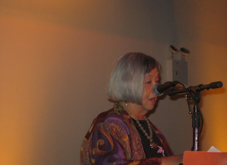 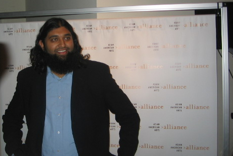 The evening’s emcee was Azhar Usman, an outspoken Muslim comedian who thinks the world of Kal Penn as an actor. Usman remarked that Dave Chappelle will still be talked about 50 years from now while the likes of George Lopez and Carlos Mencia are not well-regarded in the comedians’ circles.

“The bottom line is our community is generally under served, but we think that the cultural arts are a very important part of giving our communities a voice. Tonight you won’t just see Chinese, Japanese, Korean, but maybe 23 different diverse groups and many different languages.” 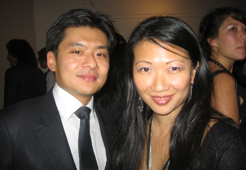 Will Lee from TMZ.com with media hostess extraordinaire Liliana Chen

Azhar Usman wrote on Mon, 11/12/2007 - 5:46pm
Hi - this is a nice wrap-up of this great event in NYC. I came across this blog post, of course, through the shameless, self indulgent process of self-Googling. But I'm glad I did. I just wanted to clarify and correct the quote/idea that was erroneously attributed to me. I did make that comment about Dave's work being remembered long into the future, but not the comedic contributions of Mencia. I did NOT, however, mention or take a dig in any at George Lopez. I would like to clarify this b/c (a) I do NOT feel this way about Lopez in reality, and (b) I think it is important to clarify this since Lopez is actually a supporter and friend of Preacher Moss, my co-founder on the Allah Made Me Funny tour. Through George's help, Preach and AMMF (and therefore myself) have truly benefitted. It occurred to me that it would be stupid to remain silent in the face of such a potentially damaging misquotation.Besides this small but important detail, spot on!Thanks!- Azhar Usmanwww.azhar.com