At this year's Kollaboration LA show, founder and executive director Paul "PK" Kim said his goodbyes to an audience of 5,000+ people, having realized his dream of taking Kollaboration to 10 cities in 10 years. Fittingly, the 3-hour show was chock-full of memorable moments: Assembly Ted Lieu stopped in to deliver a census PSA, journalist Lisa Ling demonstrated how easy it is to join the bone marrow donation registry, and a girl wearing 3-inch, sling-back heels beat out 5 break-dancing, be-sneakered boys in the freestyle dance competition (no contest).

...but were quickly eclipsed by Korean Union Dancerz's theatrical number:

...and then again by the (also Korean) dance crew Prepix, whose eerie, otherwordly performance had the way-too-LA reporters sitting behind me actually rise in awe:

But in my always humble opinon, ANBU Black Ops stole the show with their hilarious and high energy martial arts-meets-Lil' John frat-boy mash-up -- in which the bare-armed, heavily-muscled dancers party hard at the dojo before defeating the cat-faced Boss to successfully reclaim their sensei's magic box:

PK brought his wife and baby on stage as he said his last farewell -- fitting since he proposed to her at a Kollaboration show and (rumor has it) conceived his child at one too!

You know there's something special about Dante Basco when, 20 years after filiming the children's movie that made him famous, he can still walk into a room and incite a chorus of RU-FI-O! RU-FI-O! Maybe hip California folk think he's passé, but I grew up in Arizona, with its vast Asian-less landscape, so this made my little heart flutter just a little bit:

Photos by Damien Maloney for Hyphen. See all of the photos from the show at Damien's Kollaboration gallery. 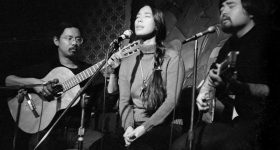 Anonymous wrote on Sat, 03/13/2010 - 9:05pm
Korean Union Dancers started off nicely...but overall...their whole performance was weak and the ending was unnecessary (had a dokdo island reference ). We are Heroes was more entertaining than them.....if the crowd wasn't so dead. but Prepix ecplised them all in the end....but... Asian people in that house...really need to learn how to cheer.....