We're getting tons of great responses in the run-up to the event, and we've been sharing more details of our teaser party as the day draws nearer -- so keep checking here to see who’s going to be spinning tunes, creating art, and dropping rhymes for you at Chop Suey tomorrow, May 7!

We dare you not to rush the dancefloor when you hear DJs Concise, Abloon, and Eri get up on stage to spin beats. This group has already generated lots of booty-shaking props for the virtual dance-off that is their online radio show, Vibes N' Stuff (VNS). The DJs excel in breaking out of the norm, eschewing typical top-40 fare for an eclectic and infectious combination of world music, soul, funk, jazz and beyond. “You want to have music you haven’t heard before,” says Concise. And listeners obviously agree -- what started out as a modest experiment with DJ Concise running the show in his kitchen at his apartment has now expanded into a bigger production with the growth of their hardcore fanbase.

You wouldn't expect Concise's military background to contribute to his musical tastes -- but then you haven't seen his extensive music collection, with records and beats spanning eight years of overseas music-shopping from all over the world. “I [had] an open ear. I didn’t realize there was so much different music. In L.A., a lot of us grew up on hip hop. [But by traveling], I realized there is so much music out there that has to be played.” DJ Eri is no slouch in the music department, either. Originally from Osaka, Japan, Eri joined VNS a couple of months ago, and she’s been traveling back and forth between her home country and the States since she was 16. Eri started out as a club kid, but her affinity for the turntables soon spawned a new obsession when a DJ mentor taught her the tools of the trade. Of her signature DJ style, Eri says it's all about creating "sounds that match certain moods [and] a theme [to build around that]." Although DJ Abloon was born and raised in the suburbs of Los Angeles, it’s his passion for exploring different sounds and beats that makes him a natural fit in the group. “I think it’s important to expand … to listen and be a fan of all types of music,” he says. For him, DJing is about feeling the vibe of the crowd and improvising a set to match the mood. “I get bored and I like doing different things. [I try to] just go there, see what kind of crowd it is, and go from there."

We're anticipating a party on the dancefloor Saturday night, and we can't wait to see what these DJs have in store for us! 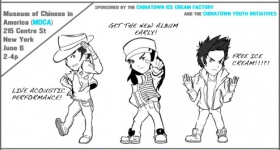